What is colorful, bright, positive and recognizable

Since light and darkness are of great importance for humans and all of nature, we react most strongly to the light-dark contrast in addition to the color-in-itself contrast. It is determined by the factor brightness or intensity and is therefore actually not a real color contrast, but a brightness contrast.

There is simply no color in media production on the screen. The screen, i.e. the background of the production, must first be assigned a color. As a rule, the programs have set white as the standard background color, similar to paper. More modern color systems such as Küppers color model, L * a * b system, HSL system, HSB system contain the colors white and black

Light-dark contrasts do not only refer to black and white with their shades of gray, but also to all other colors, which differ from one another in terms of their brightness. This means that light colors (e.g. yellow) and dark colors (e.g. purple) can also be easily differentiated within the bright colors. These color tones can also be broken down by white to light and by black to dark.

In addition to the strong light-dark contrast, a complementary contrast according to Itten is visible here.

If bright colors are surrounded by gray, this weakens the luminosity and color strength. For this reason, gray has a mediating and balancing effect. Compositions with bright and achromatic colors must have a difference in brightness between these shades, because otherwise the gray loses its independence due to the simultaneous contrast.

Light-dark contrasts are the most important contrast for the design of both print media and screen design. A variety of gray tones can be achieved between white and black.

The light-dark contrast shows or supports:

Directions are emphasized by color gradations into light or dark

a cursory glance at the two images shows that the gray area on the left appears lighter than the one on the right. Both gray areas, however, have the same gray value. See also simultaneous contrast

Emphasis on the contrast 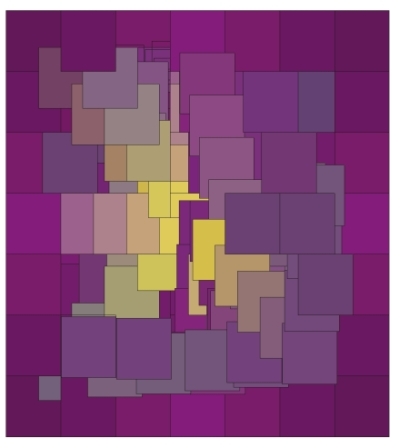