Are there unsafe areas in Amman Jordan

Jordan - Deluxe round trip in the land of contrasts

Day 1 - arrival
Flight to Amman. Upon arrival at the airport, reception and hotel transfer. Overnight in your hotel by the Dead Sea in Swemieh.

Day 2 - Amman - Jerash - Ajloun - Amman (approx. 145 km)
Today is at your leisure. If you wish, you can visit the two cities of Jerash and Ajloun today (bookable in advance, € 139 per person). You are on your way to what is probably the best and most complete preserved city from Roman times, "Gerasa", also known today as Jerash. You walk over the colonnaded streets, the southern and northern Dekumanus as well as the oval forum. You will then visit the Temple of Zeus, the north portal, the Temple of Artemis and the north and south theaters, among other things. Then the journey continues to Ajloun. Here you visit the very well-preserved Arab castle "Rabat Castle". This was once built to defend against the crusaders. Return to Swemieh and overnight.

Day 3 - Amman
Today is at your leisure. If you wish, you can take a city tour of Amman today (bookable in advance, € 135 per person). The former capital of the Hashemite Kingdom of Jordan is also known as the Ancient City of Philadelphia. Here you will find an interesting mix of ancient and modern. Ammonites, Greeks, Romans, Byzantines and Muslims have all left their mark on the layers of the city and the surrounding area. First, you will visit the King Abdullah Mosque, famous for its blue dome. Then, set off to explore the citadel and archaeological museum. Here you can marvel at the large collection of unusual archaeological finds. In the early afternoon you drive to the desert castles, which were built in the 8th century AD by the Omayyad caliphs in the northeastern desert area as hunting and pleasure castles. During a tour you will marvel at the Kharanah Fort, the Amra Bathing Palace with its beautiful wall paintings and the Azraq Fort in the oasis of the same name. Return to your hotel in Swemieh and overnight.

Day 4 - Amman
Today is at your leisure. Use the time to relax by the Dead Sea or to explore on your own. Overnight in Swemieh.

Day 5 - Amman - Madaba - Mount Nebo - Shobak - Aqaba (approx. 320 km)
After breakfast, make your way to Madaba, the Byzantine center of masterful mosaics. The most famous mosaic, the Palestinian map, can be found in St. George's Church. Ten kilometers northwest of the city is Mount Nebo, a mountain spur that juts out far into the Jordan region and is sacred in Islam as well as in Judaism and Christianity. This is said to have been the place from which Moses saw the Promised Land. At the top you will find the remains of one of the oldest churches in the world. Enjoy the unique view of the Jordanland and the Dead Sea. When the view is clear, even Jerusalem can be seen in the distance. Then make your way to a mosaic workshop in Madaba. Here you will get an insight into the design and completion of mosaics. In the afternoon you continue to the crusader castle Shobak. Also known as Mont Realis or Montreal, this fortress was built by Baldwin I in 1115 AD. In its heyday, this castle housed up to 6,000 Christians. From the heights of Shobak you have a unique view of the Wadi Araba. After the sightseeing, continue to Aqaba, where you will spend the night.

Day 6 - Aqaba
Today is at your leisure. If you wish, you can take part in an excursion to Petra (bookable in advance, € 229 per person). The "pink rock city", which was built around the turn of the era by the mysterious Arab traders of the Nabataeans under the protection of the mountains of the country of Edom, will give you an unforgettable insight into the romantic valley of Petra and the mysterious world of the Nabataeans. On foot you hike through the tightly encircling rock gorge, the "Sik", to the so-called "Treasure House of the Pharaoh". Afterwards you visit some rock tombs, the theater and the city complex. Return and overnight at your hotel in Aqaba.

Day 7 - Aqaba - Wadi Rum - Amman (approx. 500 km)
After breakfast you will set off in Jordan's largest desert, Wadi Rum. On an off-road vehicle safari (approx. 2 - 3 hours) you will admire Jordan's most amazing scenic phenomenon, framed by red-brown, rugged and torn mountain ranges. Return and overnight in Swemieh on the Dead Sea.

Day 8 - departure
Today it's time to say goodbye. Transfer to Amman Airport and flight back to Germany. 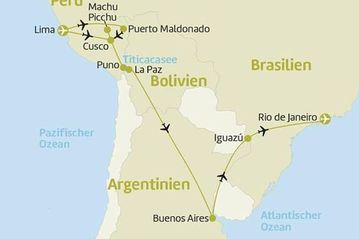