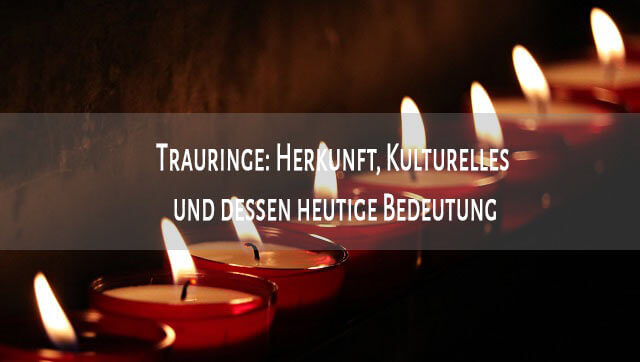 There is no question that wedding rings are part of a wedding between two newlyweds these days. The wedding ring is still a central component of marriage and a characteristic of the special connection. The origin of all of this came from a very long time ago. Back then, the Romans and Egyptians wore the ring on their left ring finger as a symbol of love and eternal loyalty. Today, however, the right ring finger is preferred. An essential difference at the time was that only the wife wore the ring as a token of love. Read more about the meaning of wedding rings and their history here. A brief digression into the past.

Wedding rings - a symbol of love and loyalty

Wedding rings, also known as wedding rings, symbolize infinity with their design. Due to their circular shape, they have no beginning and no end. This is where the magic of wedding rings lies. Thanks to their closed form, they should express eternity and solidarity. These are optionally crowned with precious stones such as diamonds. Today wedding rings are mainly seen as a symbol of marriage and the strong bond between married couples. The bridal couple selects the rings together, has them individually engraved, and on the big wedding day, the wedding rings are infected with a mutual promise of marriage.

Did you know that wedding rings go back to ancient times?

In early antiquity, the Romans and Egyptians believed in the ring as a symbol of infinity and permanence. Back then, today's wedding ring was just a ring that was more than insurance for the man. On the one hand as financial security, on the other hand he was able to tie his wife tightly to himself. The woman, in turn, was able to see the financial status of her future husband. In ancient times it was also common for only women to wear a ring on the fourth finger of the left hand. At the time, people firmly believed that the left ring finger had a vein leading directly to the heart and that the ring would therefore be filled with love. It was not until centuries later that the wedding ring became a church symbol. Depending on the culture of the respective area, the wedding ring is worn on the right or left ring finger. It was not until the time of Pope Nicholas I around 855 AD that the ring acquired ecclesiastical significance.

With the words: "Just as the ring has no beginning and no end, the relationship and the covenant with God should last forever", the Pope described the power of the wedding rings and declared marriage as a bond concluded by God, which through the Ring was sealed. The usual inscription on the rings "Pignus amoris habes" at the time confirmed to the partner: "You have a pledge for my love". In the 12th century, the rings were blessed by priests, and subsequently they became an integral part of church weddings. You should make a careful decision about which wedding rings are the right ones, because you will wear them in wind and weather, as well as in good and bad times. We are happy to answer any questions you may have and advise you until you find exactly what you are looking for. You have the option of adapting all of our wedding rings according to your individual wishes. Because the choice and the purchase of wedding rings is also special for us and we would like to accompany you competently on this path. Please do not hesitate to contact us!

In the 2nd century BC there were also gold rings in the form of two hands clasped together. According to Titus Livius (Roman storyteller), also called Patavinus, a large number of gold rings were found in southern Italy after a battle. The explanation is that it must have been wedding rings. At least since Pope Nicholas I (around 850) rings have had a sacred meaning (sacred meaning) in the Christian church. The wedding ring has been part of the church wedding ritual since the 13th century.

In Judaism, the ring is not attached to the ring finger, but to the index finger of the right hand. The ring itself is only used for ritual purposes. It is important to note that in Judaism, the woman's wedding ring must be paid for and purchased by the groom. The parents are therefore not allowed to take any action. Only in this way is it considered a gift to the bride. If the groom's parents have purchased the ring, it must be ensured that the ring has been given as a gift. This must be done before the chuppah (Jewish wedding celebration). According to the Kabbalah (Holy Scripture of Judaism) and the Jewish tradition, the wedding ring must be unadorned. This means that the ring is made entirely of gold, which means that stones or patterns are not used. Likewise, according to the Kabbalah, it is forbidden to engrave an inscription. Following the chuppah, the bride can be given a diamond ring if this is done in the jichud room, where they have some time alone. It is in this room that Jews usually break their fast (e.g. Yom Kippur). Under the chuppah, where the ceremony takes place, the bride is not allowed to give the groom a ring. This can also be done at a later point in time.

It is known that gold is a material that people adorn and beautify themselves with. Men in Islam are not allowed to wear gold in any form. The reason for this is faith. Accordingly, it is said that the man is perfect in his masculinity and does not need jewelry. It's different with women. The woman is allowed to adorn herself with gold in a variety of ways in order to be more attractive to the man and thereby create a connection between her and the future husband. Therefore, the woman is allowed to adorn herself with gold or other things so that the man is attracted to her. In this way the woman fulfills the purpose of multiplying the human species. However, strictly speaking, this is only the case according to traditional beliefs. Nowadays this is no longer a high priority. We at Wedding Rings EFES can confirm that individual wedding rings are only requested in the rarest of cases and have a religious background.

The wedding ring - the symbol of loyalty

It goes without saying that both spouses pledge to be faithful. This holy ritual underpins the whole thing and makes it clear which symbol of marriage and its symbol the wedding ring actually has. The rings are meant to remind you of the promise made. In good and in bad times. That is why the choice of wedding rings is so elementary for many couples. The wedding rings are a symbol of the loyalty of the people who wear them and their marital bond. Different rite words are used by the celebrant. One is as follows:

With the attachment of uniform rings, the wedding ring has acquired a completely new meaning. The raw material, once forged in 1000 °, has thus contributed to the changed version of the marriage, which the newlyweds can always remember.

All traditions and the corresponding ceremonies are different. Just like us humans are. A pair of wedding rings is a common symbol of marriage. The wedding rings themselves are also provided with appropriate symbols. Because the circular shape has no end and intertwined rings cannot be separated without damaging them beforehand. Today also known as the infinity symbol (∞). All symbols for those with positive connotations in the context of marriage conceive of eternity and solidarity. Special ring shapes also have a religious meaning such as the use of three-part rings to symbolize the Christian Trinity. Ultimately, what counts is the common "we feeling" that is conveyed with wedding rings and the marriage bond. There is no stronger alliance than marriage to show the bond and love of two loving people who love each other. That is exactly what counts.

That is why the choice of wedding rings is so difficult, because it should last for eternity. If you are not sure, please do not hesitate to contact us. We are happy to advise you. Write us an email at [email protected] or give us a call.