Why was Libya attacked by the US?

Late on Monday evening, 18 swivel-wing F-111 bombers rolled onto the Royal Air Force airfield in Lakenheath in the south of England. The squadron takes off and turns south. A little later, 15 A-6E fighter-bombers rise from aircraft carriers in the southern Mediterranean. Both squadrons of bombers reached their target area at two o'clock in the morning, and 60 tons of ammunition fell in the next twelve minutes. Less than half an hour later, the "El Dorado Canyon" operation is over. "Today we did what we had to do," a grim-looking US president soon declared to TV viewers in the USA. "If necessary, we'll do it again," he says. The ruler of the "Empire of Terror", Colonel Gaddafi, received an unequivocal warning. 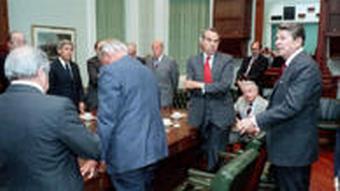 US President Reagan (r.) And US Congressmen on the evening before about the air strikes

It was the night of April 14-15, 1986, when US planes bombed the Libyan cities of Tripoli and Benghazi. The attack was seen as a retaliation for the terrorist attack on the "La Belle" nightclub, popular with US soldiers, ten days earlier in Berlin. Three people were killed and around 200 injured. US President Ronald Reagan saw the involvement of the Libyan ruler Muammar al-Gaddafi in the bomb attack clearly proven.

Gaddafi as a target?

In the half-hour retaliatory strike, troop accommodation, port facilities and the military part of Tripoli airport were bombed. Barracks and a military airfield were the targets in Benghazi. According to various Western media reports, 60 to 100 people were killed. Several houses in Tripoli were badly damaged and the embassies of France, Switzerland and other countries were hit.

US media assumed that Gaddafi should be killed in the attack. The dictator survived the bombs on his residence. Allegedly Gaddafi was warned by the Maltese Prime Minister and the Italian politician Bettino Craxi that unauthorized planes were approaching the Libyan coast. The Libyan state media reported that an allegedly 15-month-old adopted daughter of Gaddafi was killed in the attacks. Gaddafi's wife and other children were injured. 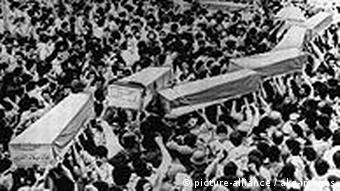 The UN General Assembly condemned the US attacks in November 1986 as "a violation of the United Nations Charter and international law". Unlike the current military action, the United States went it alone in 1986, with only the British government providing logistical support. France denied the US overflight rights. The US bombers had to take a huge detour from England to North Africa via Gibraltar.

In November 2001 the Berlin district court sentenced an employee of the Libyan secret service to life imprisonment for the La Belle attack. A formally independent development foundation founded by Gaddafi's son Saif and German victim lawyers agreed in 2004 on compensation payments totaling 28.4 million euros. In August 2008, the US and Libya also agreed on compensation payments for the US military attacks and the victims of other Libyan terrorist attacks, including the explosion of a US passenger plane over the Scottish Lockerbie, killing 270 in 1988. Washington and Tripoli took over shortly after the compensation agreement was reached Negotiations on an oil trade agreement.