This is of existential importance for the winemaker, important and interesting for the wine lover Quality of the vintages. In the northern growing areas in particular, it is largely determined by the must weight of the grapes (unit of measurement: degree Öchsle), albeit other extract substances (acids, glycerine and the phenols, pectins, proteins and minerals, which are only present in small quantities), which can only be found in optimally form a favorable weather profile, play an equally important role.

Evaluation of the vintages

2019 ..., another year of very good quality, but with considerable damage from dryness and sunburn, in some cases by 30 - 50%, especially with Riesling. After a normal beginning of vegetation until April, a relatively dry vegetation phase from April to July in connection with a heat wave at the end of July (on 3 consecutive days up to 40 ° C) led to dryness and sunburn damage. 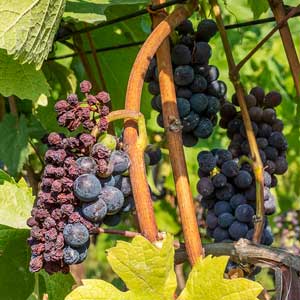 Above all, the defoliation of the vines, which improves ventilation of the grape zone and, due to the increased incidence of light, the formation of intensely colored skins, led to considerable drying out and damage to the berries in the grape zones facing the sun. A loss for the winemaker in two respects - one reduced amount associated with a considerable additional effort during the grape harvest by cutting out the dried berries. Compared to the long-term average (39,000 hl), the hectolitre yield of 36,000 hl on the Ahr. In comparison 2018: 56,000 hl.
A consolation for the winemakers - due to the reduced quantity, more extract-rich and very good wines from the 2019 vintage can be expected.

2018 ... , a year with a picture book summer that produced absolutely healthy grapes. It remains to be seen what influence the extremely long dry phase and the vegetation phase shortened by approx. 3 weeks have on the development of the extracts. To the delight of the winemakers, a full year with above-average degrees of Öchsle.

2017 ... , a year with a good end for the Pinot Noir. May frost and hail in the further course of the weather reduced the yield by approx. 15%. A wet July and August well into September were a challenge for the winemakers, but they made for good extracts. The influence of the cherry vinegar fly was more noticeable than in the last two years and in some cases required an early selective harvest. For the Frühburgunder (average must weight: 78 ° Öchsle) too late, ideal autumn weather set in from the second half of September and brought good to very good qualities to the later maturing varieties Pinot Noir (84 ° Öchsle) and Riesling (82 ° Öchsle).

2016 ... , a year of extremes with a very good outcome. A cold, wet phase in June was followed by pure sun from the beginning of September. The sunny weather with pleasantly cool nights ensured healthy grapes with good aromas, pleasant acidity and high extract values, especially in the red wines.

2015 ... , a Pinot Noir year on the Ahr. A promising start with a dry phase in the first half of the vegetation period, interrupted again and again by sufficient rainy days (especially in June), followed by a warm but wet August and a too wet and cold September in the important ripening phase. An October that was too cool was only enough for a year in which the main grape variety of the Ahr, the Pinot Noir (63%) compared to the Pinot Noir (6.5%) should be more appealing due to the higher average must weights. Largely healthy grapes with good extract and acid values ​​and an approx. 10 - 15% lower amount should result in very good wines, especially with Pinot Noir.

2014 ... , An initially promising, but then difficult and selective vintage with a surprise guest, the cherry vinegar fly, 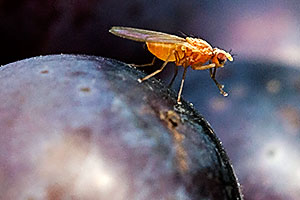 which sometimes caused significant damage, especially with the Frühburgunder.
Another early shoot brought a vegetation advantage of up to 3 weeks by the middle of the year. But the rainy summer, especially the cold and wet August, almost ruined this advantage, and combined with the inconsistent autumn weather, it was a difficult and selective year.
The quantity and the extracts are right, with the must weights, winemakers and wine lovers have to be satisfied with good basic wines.

2013 ... , a changeable, difficult and yet still good to very good vintage.
The long winter into April, late frost damage in the valley areas between Dernau and Rech (losses of up to 70%) and heavy rain during the flowering phase in the upper wine-growing region with occasional hail damage (Dernauer Goldkaul) did not make the winemaker very hopeful. But pleasant summer days in July, August and well into September with little rainfall almost made up the approx. 2-week vegetation residue. The changeable autumn weather in October not only made the grape harvest difficult, it also required a selective harvest due to rot damage and ultimately prevented another excellent vintage. Despite a harvest volume reduced by approx. 25% (higher in some areas), the winemaker can be satisfied, as surprisingly good levels of ripeness have been achieved. A vintage that does not come close to the outstanding 2011 and 2012 vintages, but thanks to good extracts it can be equated with the 2004 and 2007 vintages.

2012 ... , a vintage better than what feels like summer. The unfavorable weather during the grape blossom reduced the amount by up to 50% (average 30%). The quality of the grapes is all the more convincing. The winemaker sees it with one crying eye. For the wine lover, another, qualitatively outstanding vintage on the Ahr due to the expected high extracts.

2011 ... , a year with a record-breaking early budding the vines, long, albeit changeable, vegetation and at the end of a picture book autumn brought fully ripe and healthy grapes to the wine press. From the experience of 2003, the winemakers preferred the harvest to avoid over-ripeness and dosed it carefully. Another excellent, full vintage that approaches 2009.

2009 ... , one the warmest years In the long-term average, paired with a long vegetation period, brought healthy grapes into the wine cellar. In any case, compared to 2006, the wines hold their own due to an approx. In retrospect one of the best vintages on the Ahr.

2008 ... , a long growing season and healthy grapes made for well-structured wines.

2006 ... , a another outstanding vintagewho breaks with tradition on the Ahr - only odd years become top years. Excellent autumn conditions with vegetation that was 4 weeks longer than the 2003 vintage produced dense and fruity wines.

2004 ... , a very good vintage, with healthy acidity and high levels of extracts, which resulted in dense and storable wines.

2003 ... , one in hindsight very good vintage. The shortened vegetation course with low acid and extract values ​​and high must weights resulted in wines that were partly alcoholic and not always with a favorable ripeness.
Late frosts in May, which reduced the harvest volume by around 30%, did not yet reveal the quality of the vintage. However, a summer of the century ensured that reading began unusually early. Unusually for a northern wine-growing region, the winemakers had to start the grape harvest almost 4 weeks earlier. At the beginning of the actual harvest month of October, the harvest was largely complete, and this with must weights that exceeded even the super vintages 1976 and 2001 by an average of almost 6 ° Öchsle. The predicate wine share in Pinot Noir and Early Burgundy was almost 100%, even with Riesling over 80%.

2001 ... , the new millennium started with an outstanding vintage. A good weather period in May with rapid budding, rapid flowering in June, a warm and precipitation-rich growth period in July and ideal conditions in August ensured a vegetation advantage of up to two weeks. A wet and cold September destroyed this advantage, but brought the necessary soil moisture after the dry previous month. The cold temperatures prevented fungal diseases and rot in the grapes. The grapes used the warmest October since 1706 with temperatures of over 25 ° C to full ripeness with a high extract content in a seldom so healthy state. 2001, a vintage with an optimal physiological maturity of grapes.

2000 ... , a vintage with a low proportion of predicate wines. The course of the weather required a selected harvest due to rot damage.

1999 ... , A vintage that should also be emphasized, the warmest September on the Ahr until then, brought healthy and high-quality grapes to the cellar.

1997 ... , a vintage with similarly high must weights of the top vintages of the seventies. After late frosts in May, which led to significant volume losses (over 50%), a warm summer and a dry autumn resulted in high must weights. 1997, the Top vintage the nineties.

The tendency of nineties clearly pointing upwards with a quality density towards the end of the decade. Not just the climatic conditions, but that too increasing quality awareness have contributed to this.

The eighties are characterized by good to middle age groups and the second weakest age group 1984.

The seventies offered a high density of good to very good vintages, with the outstanding year 1976, but also the weakest vintage 1972.

The evaluation of the vintages can deviate from the table for individual wineries due to selective harvesting and later harvesting times.

The assessment of the physiological maturity includes an evaluation of the color of the berry skin, the elasticity of the pulp, the ripeness of the kernels and the taste of the berries. In the meantime, more and more winegrowers in Europe are applying these ripening criteria in addition to the criteria such as measuring the sugar concentration and acidity.