How did you fight with your identity

Identity is en vogue: Fighting for political goals is increasingly based on the assumption that one is part of a - discriminated - group. That makes solidarity between these groups difficult, says British literary theorist Terry Eagleton.

In the course of his 75-year life, the “radical socialist” Terry Eagleton has already messed with some hobbyhorses of the left, for example with the “Illusions of Postmodernism”, as one of his best-known books is called. The book “Materialismus. Capture and change the world ”at Promedia-Verlag.

science.ORF.at: Identity politics is on everyone's lips right now. The political scientist Francis Fukuyama, for example, recently said in his new book that the left has placed too much emphasis on minorities and too little on growing socio-economic inequality over the past 30 years - which has not least contributed to the strengthening of right-wing and authoritarian parties. You describe yourself as a radical socialist: Do you also think that the left should care more about the socially disadvantaged than about identity-political issues? 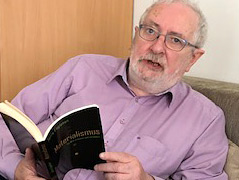 Terry Eagleton, 75, is Professor of English Literature at Lancaster University. He recently visited Vienna for the presentation of the book “Materialismus”.

Terry Eagleton: I hesitate to prefer one of the two sides - either the socio-economic or the identity-political. One thing is certain: today there is a conflict between supposedly enlightened, cosmopolitan liberals and people who are full of fear and full of anger. There is a great temptation to join a site. But as a radical you have to try to understand why the situation is the way it is. And I think that there is a secret connection between the two phenomena: the more ruthless and globalized capitalism becomes, the less it cares about people and communities, the more and sometimes more aggressively some emphasize belonging to their community. People like Fukuyama spoke of the end of history around 2000 - when they ultimately meant that capitalism was the last horse left in the stable. They also thought that the only problem was inclusion, that is, including as many people as possible. Inclusion has become the buzzword of identity politics. But I think one should think less about what to include here.

How do you assess identity politics in general?

Eagleton: I am ambivalent. On the one hand, it has shifted attention from things that existed in my time (laughs) in the 60s and 70s - from things like the means of production, revolution or ideology. On the other hand: After Reagan, Thatcher and Co. established a very aggressive form of capitalism and the labor movement was beaten back, the energies had to go somewhere. One of the places was identity politics. That is fine, because in the best case it enriches the often very impoverished language of the Marxist left: They could no longer only talk about class struggle and production, but also penetrate other areas. That brought politics closer to people's everyday lives, to their reality, their gender, their skin color, their sexual orientation. For the left it was a step forward. But actually we should complain more about the fact that we have to waste so much energy on things like gender, skin color and sexuality - ultimately not at all so are important. Because who the hell should really care about it at the end of the day? (laughs) We should look forward to the day when that is no longer necessary and we no longer have to talk about class struggle, but can focus on more important things. Such as the very curious size of Prince Charles' ears, which I assume are the only phenomena on earth that can be seen from space in addition to the Great Wall of China. (laughs)

You say you are ambivalent about identity politics, what are your problems?

Eagleton: It's a complex question. As I said, some terms have disappeared from the debate, such as ideology, but also solidarity. It was not differences or inclusion or identity that apartheid in South Africa and the neo-Stalinist regimes in Eastern Europe eliminated, but it was solidarity! But the term has fallen out of favor. Why? Because some mistake it for uniformity that tramples over differences. I think we should develop solidarity across increasingly separated identities. Because that's one of the problems with identity politics: it fragments society into many small groups, each fighting their own struggles. The fact is: gender, ethnicity, sexual orientation, etc. are fundamental areas of political struggle today. But they are not what makes the world run. The world still rules capital. The masters of the world are the bosses and CEOs of the transnational corporations. They determine the logic within which the battle for identities is carried out. If one does not touch this framework and “only” deals with one's own identity, one will not reach the fundamental problems. In this sense, the ancient struggle of people against profit is as relevant as ever.

The right responds to the current crises with its version of identity politics, with an emphasis on family, nation, ethnicity, etc. Why is it so much more successful?

Eagleton: Enormous energies have been released against the ruling system, many of which are occupied by the right. But this was historically "successful", if we think of the Second World War. I also believe there is nothing wrong with "belonging to something" at all. That is quite natural, even if the postmodern does not like to hear it and consider everything to be ideology. But that's nonsense, because as social beings we naturally want to belong to something. On the other hand, it is not natural to want everyone else not to belong here and to link this impulse with blood and soil. I would even lean so far out the window - extremely brave, I think (laughs) - and say that it isn't even bad to surround yourself with people of your own kind, your skin color, the same sexual orientation, etc. It can be very relaxing and nice because you share things that are taken for granted. It becomes problematic when this is combined with hatred of strangers. The paradigm of love in Christian gospel is not love for friends - this love is simple, friends can be loved by anyone - but love for the stranger and the enemy. It is almost impossible to love someone like that - and not in the western sense with a comfortably glowing heart in your chest, but in the sense of: doing justice to someone who is a complete stranger. This is the test of love in gospel, a very high standard.

The right would say: Your left always loves strangers more than their own people. From this the discussion about left-wing patriotism or nationalism developed. Do you think this is a good idea?

Eagleton: I consider left nationalism dangerous. Rather, we should ask ourselves where the fear of strangers comes from. If one were to use the socially produced surplus value to combat material needs of people such as education, housing or work, then we would not have some of the conflicts at all. Of course, they wouldn't be gone automatically. I have Irish roots and I now live in Northern Ireland. The hatred there is as fresh as it was 20 years ago. It takes longer to cure it, but it is not that important as long as you are fighting the economic problems.

More on the subject: