What are the career opportunities in IoT

The metasearch engine Joblift has evaluated job advertisements for IoT specialists and accessed over 100 partner job exchanges. The result is a kind of map for IoT applicants. The job offer in this field is growing at an above-average rate. 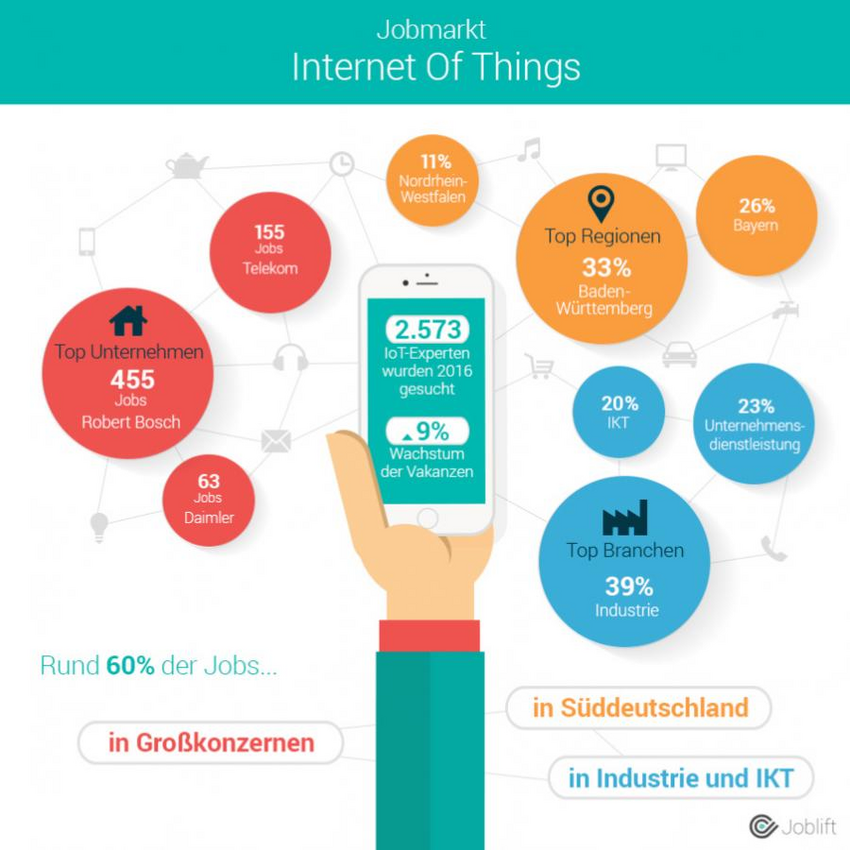 Joblift has created a kind of map for IoT applicants.

IoT jobs are primarily offered by companies with more than 1,000 employees, who are mainly based in southern Germany. In addition, it is mainly industry and information and communication technology (ICT) that seem to be driving the increasing networking of objects in this country, while other sectors such as healthcare are currently still lagging behind expectations.

The demand for IT experts with IoT specialization is lower than for those with a security focus, but it is growing three times as fast as in the entire professional field, according to Joblift.

According to an investigation of all positions on joblift.de, only 2,573 IoT experts were sought last year, 465 of them in the smart home sector. For comparison: In the same period, around 9,020 designated cloud computing and 9,271 IT security specialists were asked.

Does this show the diminishing importance of the IoT megatrend? The average monthly growth in job advertisements in this area speaks against it, according to Joblift: This was 9% and was therefore around three times higher than the nationwide increase in the demand for all IT specialists, which was just under 3%.

Industry and ICT act as pioneers - trade and health lag behind

Although great potential is ascribed to increasing networking in areas such as health care, the expansion of this technology in Germany seems to be essentially limited to a few sectors. 39% of all jobs in the IoT area were advertised in industry in the last twelve months, 20% in ICT.

In addition, there are another 23% of the advertisements that were placed by corporate service providers such as consulting firms or recruitment agencies. These in turn also work largely with customers from the two sectors listed. In contrast, retail and healthcare, often cited as future fields of application for the Internet of Things, only placed 0.3% of job ads each.

This concentration is also reflected in the distribution of the companies that advertise: The industrial group Robert Bosch led the ranking with 455 positions for IoT specialists. This is followed by the Telekom Group with 155 and Daimler with 63 published jobs. The IT company IBM, which opened its global center for the Watson IoT business unit in Munich around a year ago, only offered 23 jobs there, making it 13th.

This evaluation already shows that it is mainly large companies in this country that seem to be concerned with the megatrend Internet of Things. In fact, 57% of all job advertisements in this area were placed by companies with more than 1,000 employees, of which 78% were again from large corporations with a workforce of at least 5,000.

The heavy weight of individual companies leads to IoT metropolitan areas in the south of the country. Last but not least, the Bosch Group's strong demand for IoT specialists means that Baden-Württemberg is the front runner when it comes to recruiting this professional profile - there were opportunities for job seekers who wanted to deal professionally with the intelligent networking of objects last year particularly promising in the southwestern state with 33% of vacancies. Another 26% of the vacancies could be located in Bavaria, North Rhine-Westphalia follows somewhat behind with 11%.

The majority of the positions aimed at IoT specialists can therefore be assigned to the south of the republic. IoT seems to be in its infancy in Germany. The steady growth in the number of jobs suggests that the trend continues to open up a lot of potential, especially for small and medium-sized companies as well as sectors outside of industry.