What are strings for instruments made of 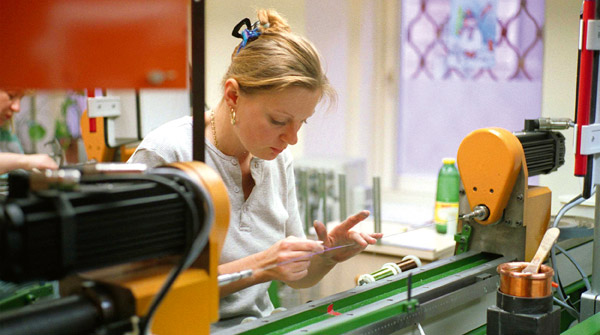 From “cat intestines” to wound steel: In the cheers for oh-so-well-built musical instruments, the part that makes them vibrate is often forgotten: the string with its eventful history.

The use of gut strings for bowed or plucked instruments can be traced back to early high cultures. In the 1950s, a steel string came on the market to replace this old tradition. In the sixth district of Vienna, violin maker Franz Thomastik and engineer Peter Infeld began to work on this new type of string in 1919. In the meantime Thomastik-Infeld has become an indispensable part of the music industry as the European market leader and producer of around 2,000 different strings.

There is a tremendous amount of discussion about strings in the world of string instrumentalists. Some musicians seem to change their string combinations more often than their outfit. Others swear by their “perfect combination” for decades - and no string sounds the same on every instrument. There is enough material for experiments with a wide variety of strings, because there are various products on the market that can hardly be distinguished from the outside, except for different colored fabric wraps at both ends. Differences can only be found by looking at the materials. In sales, they are described and differentiated using attributes such as “soft”, “warm”, “radiant”, “strong”, “brilliant”. But how exactly do you want to name something that is so subjectively perceived as sound?

Many musicians suddenly seem to be particularly in agreement when it comes to the quality of the Thomastik-Infeld strings. They are, so to speak, a "classic" - and that can also be justified historically. Strings made from plant fibers or sinews were already used to make music in prehistoric times. In high Asian cultures horsehair, silk and intestine were also used. In the grave of the musician Harmosis, who lived around 1500 BC. BC, his lute strung with gut strings was found almost intact. The instrument can still be admired in the museum in Cairo.

In the middle of the 17th century, strings began to be wound with thin wire. The core of the intestine, also known as the "soul", has become more robust due to the spiral wrapping. Until the First World War, strings made from the intestines of ungulates were standard. The legend that gut strings are made of cat intestines - the term "catgut" is still used in English today - is due to a very old story. An Italian saddle master discovered around the year 1300 that the intestines of the mountain sheep he used for sewing were also ideally suited as strings for musical instruments, and string production was soon the most important source of income in the region. they said that the new material was cat intestines - and thus deterred potential competition.

After the First World War, natural casing was a scarce material because it was needed to sew the wounds. So an alternative way of making strings had to be found. In Vienna, Dr. Franz Thomastik, not only a violin maker, but also a doctor of philosophy, has been dealing with other raw materials for string production together with the engineer Otto Infeld since 1919. Steel wire had already been tried and tested in the production of piano strings. By 1926 Thomastik-Infeld had succeeded in using the material in solid string instrument strings. In the 1950s, they succeeded in what was probably the greatest innovation that helped the company gain worldwide renown: the manufacture of a string with a synthetic core material and wound tape. The famous “Dominant” string is still the “reference string” for the violin today.

The switch to steel strings brought many advantages: In addition to being more robust, they react less strongly to temperature and humidity fluctuations or hand sweat compared to the natural product gut. In historical performance practice, gut strings, both wound and unwound, are still present. For the core and the wrapping of the string, however, a wide range of different materials is now used: the most modern plastics, some of which come from aviation, from which synthetic strings are made, plastic strings made of nylon, Perlon or polyester wound or coated with aluminum, tungsten, Chrome steel, silver or gold and also biocompatible materials such as titanium are processed. At Thomastik-Infeld alone there is a selection of around 2,000 strings, 97 percent of which go all over the world every year. Gut strings were never produced in the Viennese factory, not only because the company, as the inventor of the steel and synthetic strings, is traditionally not active in this field. In the middle of Vienna's urban area, it would be complicated to tan or to carry out other processes required for the production of gut strings.

"It's such a lively feeling under your fingers"

Of course there is no end to the further development of strings. Developer Bernhard Rieger presents the latest Thomastik Infeld product at Musikmesse Frankfurt: the Versum Solo cello strings, which he hopes could become a new standard. For the tests during development, Rieger himself selected 100 cellists and instruments and continued to perfect the properties of the strings in over 300 tests over a period of 18 months. Now they are in small, mint-green envelopes in the showcase, and their developer has to answer questions from trade fair visitors and journalists. Rieger studied double bass himself and then - when he was admonished by his colleagues in military music during military service to just learn something else - he also went on to study technology. In addition to his job as a string developer, he plays as a guest in many different Viennese orchestras such as the RSO, the State Opera and the Vienna Chamber Orchestra. This also helps him when working as an engineer: “I always start with a sound in my head! Of course, math is also involved, but you only need it as a tool, sometimes you have to dive deep into physics to check intuitive ideas. It's a lot of craftsmanship and experience - but above all a lot of listening! "

The way from an idea to a finished new string takes a good two years and involves many tests and material changes. The long company history is always present for Rieger: “Looking back, one of the most innovative developments for me is the development of the spiral rope, which has spirocore strings as a core, a heavily twisted bundle of steel wires. This creates a high level of elasticity. I admire my predecessors for this invention, what a crazy idea! They developed the machines themselves to make this possible, some of these machines are still running in production. "

Michael Veit, principal cellist in the Darmstadt State Orchestra, spontaneously agreed to play at the exhibition stand and introduce the new strings. Thomastik employees and spectators stand devoutly around him and listen to some sentences from Bach's cello suites. Bach wrote with the sound of gut strings in his ear, but he might have liked this sound too. In any case, Veit seems to be completely enthusiastic. “It's such a lively feeling under the fingers, it evokes an uncanny joy in trying out everything!” And it is this joy in playing that spurs the string producers to always think one step further. “At Thomastik-Infeld, new strings are developed, but old ones are also improved. I like that. Like us musicians, they are actually a bunch of inspired artists who want to push boundaries. That's why I like to stop by there and test the latest products. There is something for everyone."