How did Britain colonize the colonies 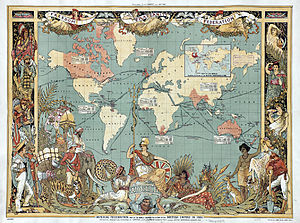 A map from 1886. The draftsman proudly shows in red in British which parts of the world belong to the empire.

The British Empire was the largest empire on earth. It is also called the British Empire, in other words: British Empeier, or just the Empire. It was most powerful around 1900, after which it got a little bigger. Great Britain ruled over a quarter of the world at that time.

In this way Great Britain influenced the countries it occupied. Many riches and raw materials came to Great Britain from its colonies. It got rich and was able to spend a lot of money on science and culture.

The British Empire ended, especially in the years after 1950. The peoples resisted the British, and the Empire became too expensive for Great Britain. Today Great Britain only has a few small islands as colonies, or as they say: overseas territories.

Which countries are included?

At the height of its power, Great Britain owned colonies on every inhabited continent and even claimed part of Antarctica. That is why it is also called “The realm in which the sun never sets”, because due to the time difference there was always daylight somewhere.

In the Middle East, they included Egypt and the south of the Arabian Peninsula, and later also today's Israel and Jordan. In the rest of Asia, the British ruled mainly in India, Pakistan, Sri Lanka, Myanmar, the cities of Hong Kong and Singapore, and in Malaysia. Oceanic colonies were Australia, New Zealand, and Fiji. In Africa, South Africa and some neighboring countries were part of the empire as well as Ghana, Nigeria, Sudan, Uganda, Kenya and Tanzania.

In America, the British ruled over what is now Canada for a long time. The eastern United States was also British until 1776. In addition, there are countless islands in the Caribbean and the Pacific that once belonged to the Empire. The best known is probably Jamaica. In Europe, all of Ireland belonged to it, otherwise you only had the small areas of Malta, Cyprus and Gibraltar. Some places like the Falkland Islands or Bermuda are still British today.

How did the world empire come about?

At the end of the Middle Ages, around 1500, some European countries began to conquer colonies. England discovered areas for itself especially in North America. It also occupied territories on the coasts of South America, India, and Africa. Sometimes England took everything by force, sometimes it bought bases, sometimes it signed contracts with the locals.

After the union of England and Scotland, the country was called Great Britain. By 1800 Great Britain lost most of the colonies in North America: they made themselves independent and became the United States of America.

Great Britain acquired more territory and explored the world, thanks to an explorer like James Cook, for example. Around 1880, the way Europeans dealt with the colonies changed. They also occupied the interior of the continents and exploited the colonies even more. Great Britain, the country where railways and steamships had previously been invented, was particularly successful in this.

What were the consequences of the empire? 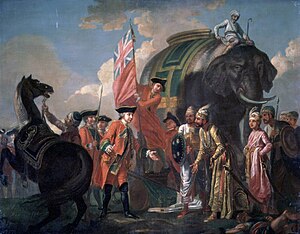 This picture dates from around 1760. It was painted after a British victory in India.

The British controlled some areas directly: the officials there received their orders from the British capital, London. Other areas still had their old rulers, but the British still determined the most important things.

Whoever wanted to become something in the world empire had to learn English. British law often applied, even where people had a completely different culture. The British had railways and telegraph lines built. They needed that to maintain their power, but it also benefited the occupied countries.

The British ruled the trade and became very rich. It was said that other empires like Russia ruled a lot of land, while Britain ruled the sea. No other country had so many ships.

How did it end?

The peoples in the British Empire wanted more freedom and not always do everything that the officials in London told them to do. In the First World War, Great Britain fought mainly in Europe. It needed soldiers and other support from its colonies. After the war, the people from the colonies demanded more freedom in return.

Initially, the colonies were given more power of their own, in which people with white skin lived or ruled. These were Canada, Australia, New Zealand and South Africa. By 1930 they became more or less independent. Their head of state was still the King of Great Britain.

Little changed for the rest of the colonies. Great Britain even got a few colonies from Germany. But Britain needed support again in World War II. The first great country to gain independence was British India: in 1947 it became India and Pakistan. Sometimes Britain used violence to try to repress the locals again. But gradually Great Britain had to give up the colonies. That happened mainly around 1960.

The Commonwealth of Nations has existed since 1931. Translated, this means "common good of the peoples". The head is Elizabeth the Second, the current Queen of Great Britain. Almost all of the former colonies have become members of the Commonwealth. They want to work together for peace, freedom and prosperity.

There is also an article on “British Empire” for beginners on MiniKlexikon.de and other search results from Blinde Kuh and Ask Finn.

The Klexikon is like a Wikipedia for children and schoolchildren. The most important things explained simply, with definition, many pictures and maps in over 3000 articles. Basic knowledge suitable for children, everything easy to understand and good for presentations in school.
<?