What is the best violin string brand

The Strings of a string instrument are just as important to the sound as the other parts of the instrument. The sound is generated with the string, it begins to vibrate and these vibrations are transmitted to the resonance body. The initially very quiet sound is amplified and then radiated outwards. In reality, of course, all of this is much more complicated, because the vibrations are transmitted to the top via the bridge, to the entire body via the sound post and across the top with the help of the bass bar. Ultimately, it's not just the body that resonates, but also the fingerboard, neck, pegs and tailpiece. They all vibrate and can influence each other positively or hinder the generation of sound. 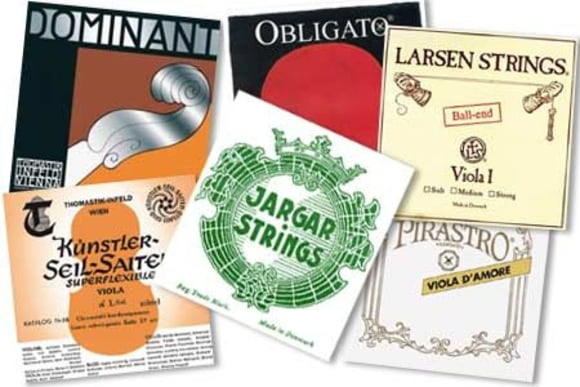 First of all, the string strings can be divided into three large groups. This is based on the corresponding core materials from which a string is made. They are Gut strings, the Synthetic strings and the Steel strings. There, too, there are a lot of gradations and differences, which will be explained in more detail below. Which string is the right one for my instrument? That is the crucial question that you will first ask yourself. The selection of strings for stringed instruments has become immensely large, and new strings are constantly coming onto the market, either some variations of known strings for specific requirements or completely new types of strings. This guide is intended to shed some light on the jungle, but to say it in advance: there is no standard recipe with which you can find the ideal string for your instrument. Every string instrument is individual in its resonance behavior and sometimes you just have to take a set of strings and try out whether they lead to the desired result. However, there are certain characteristics of the different types of strings that you can use as a guide when choosing.

Traditionally, string strings are made from the intestines of ungulates, mainly sheep from barren and dry areas. The intestine is cut into strips, twisted, dried and then sanded. These bare gut strings still exist today, but they are only used for the stringing of historical baroque instruments and for the authentic performance practice of "early music". The gut strings that are on the market today have a winding, i. H. they are wound with a metallic material. The mass is increased by the winding of the string core, so the string becomes heavier and thus sounds deeper. Without this winding, the string would be much thicker for a certain pitch. You could also formulate it differently: with the wrapping, much thinner strings can be produced without affecting the elasticity and manageability. The wrapping also influences the sound properties considerably. More on that later. Gut strings usually have a relatively soft and warm sound, but are very sensitive to temperature fluctuations and react to changes in humidity. They have the property of attracting water from the air (hygroscopy) and begin to swell. This will reduce the tension. The break-in time, i.e. the time it takes for the string to keep its tune, can also take one to three days for gut strings. The lifespan is limited, professionals change the strings every one to two months, but they usually last about a year. Gut strings have a powerful tone, are pleasant to touch, have a natural elasticity and can be addressed in a differentiated manner. For gut strings, aluminum or silver is usually used as the wrapping. As with the other types of strings, there are different strengths, for example "soft, medium, strong" or "dolce, medium, forte". More on that later.

Strings with a plastic core

The designation Synthetic strings is a bit misleading because bare plastic strings are not used for string instruments. Such strings are probably known from the stringing of classical guitars (e, h, g). What is made of plastic is the string core, which is then wrapped with a metal jacket. Different materials are used for this, similar to gut strings, which influence the thickness of the string and the sound properties. The strings wound with silver are mostly used for the lower strings, they have a rather strong and warm tone. When it comes to plastic itself, there are different materials, but nylon, perlon and polyester are well known. Particularly resistant materials from space technology are also used. In terms of sound behavior, a synthetic string has certain similarities with a gut string (although it has never quite achieved their characteristic properties). The strings with a plastic core are now so mature that they can be used by beginners to virtuosos. The synthetic strings are also ideal for a wide variety of musical styles. They have a number of advantages over gut strings: they keep the mood very well and they are insensitive to the effects of temperature and humidity. They have a sound that is usually described as round, clear, soft and rich in overtones. In terms of gripping behavior, they are relatively soft and the possibilities for sound modulation are very good. The break-in time is very different and, depending on the type of string, can be relatively short, but it can also take a little longer.

Steel strings are more familiar from plucked instruments. When it comes to string instruments, many musicians tend to have negative associations, which is partly justified, but not always the case. The steel strings have one property that is desirable for plucked instruments: they last for a long time. And it is precisely these properties that you want to avoid with string instruments. That's why cheap steel strings have an uncomfortably metallic sound. The reverberation of the strings can be suppressed by targeted damping of the steel core. This damping is achieved on the one hand by wrapping with a metal wire or band, on the other hand by a braided layer of silk or plastic threads underneath. The raw material of the steel string core consists of a special crucible cast steel, which is drawn thinner over drawing dies and drawing diamonds and thereby compacted. The first steel string to gain acceptance in the violin was the bare E string. Acceptance was easier to achieve here because there were always problems with the thin e-gut strings, which tore very easily. In the meantime, the steel E-string has become the standard for the violin, even when stringing with gut strings. The E-string can, however, also have a winding, which makes it a bit more comfortable to grip and sometimes fits better with the rest of the strings. The advantages of steel strings are the stability of the mood and the long service life. Steel strings are very popular for beginners and for teaching. They are characterized by a powerful sound, but the cheaper models are often hard and metallic. These simple and inexpensive steel strings have one Full steel corewhile the higher quality strings create a Rope steel core (Cable) or a Fine rope steel core have. Steel core strings are strong, soft and sonorous in sound and are often used for the viola and cello. Fine steel core strings are a little softer and therefore easier to grasp, and with their powerful, round and balanced sound they also meet high demands.

String strings are offered in different strengths, although the strengths given by different manufacturers are not necessarily comparable with one another. Common names for different strengths are: "soft, medium, strong" or "dolce, medium, forte" or "light, medium, heavy". In terms of physical vibration behavior, a thin string comes closest to an ideal string. It has a good response and is very rich in overtones, but its sound is rather quiet due to its low mass. If the string is stronger, the response may be worse, but it has a greater fullness of sound. Stronger strings are recommended with a low bridge, with thicker walls of the instrument and with a high vaulted ceiling. You can also easily try this out with the strings that are pulled on the instrument by tuning the strings down a little. If you like the sound better, you can use thinner or lighter strings. In the opposite case, stronger strings are likely to sound better. If you do not yet have a clear idea of ​​the sound, it is advisable to first use the medium strength (medium).

Finally, a few words about the wrapping, i.e. the wrapping of the string core with a metal. This wrapping increases the mass of the string in a targeted manner, how much depends on the specific weight of the respective metal. The higher the mass, the deeper the string sounds, and without winding it would hardly be possible to make the thick, heavy strings for deep instruments. The wrapping can be one or more layers and consists of round or flat wire made from a wide variety of metals (steel, chrome steel, tungsten, silver, aluminum, titanium or, in rare cases, gold). When using round wire, the string is then sanded. Between the core of the string and the wrapping there is usually an intermediate layer made of braided silk or plastic threads, which on the one hand holds the wrapping better and on the other hand gives the core of the string an internal damping. With aluminum, which has a very low specific weight, relatively thick strings can be produced. Such strings are relatively inexpensive, but have the disadvantage that they blacken the fingers (acidic sweat!) And otherwise wear out rather quickly. Aluminum sounds bright and is more commonly used for the higher strings. silver on the other hand, it has a relatively high specific weight, as a result of which the strings become thin and are used especially for the fourth string. The silver layer, however, is only used for the top layer, underneath is usually nickel. titanium is an expensive metal with a low specific weight and is mainly used for the thinnest strings. The disadvantage is that the wear is quite high and the straps can loosen. gold is a very insensitive metal and, as a thin layer, can form a protection against hand perspiration. Because of the high price, gold is only used on violin strings. tungsten has a rather neutral influence on the sound, but can keep the string thickness low due to the high specific weight. Tungsten wrapping is more likely to be found on the third and fourth strings. When a loop out chrome is present, it is mostly an alloy (chrome steel). nickel in its pure form is only rarely used in string instruments, but it is often present in some kind of alloys. Therefore, if you are allergic to nickel, you should use nickel-free strings that are available in stores.