4 Vesta is a dwarf planet

More than 413 million kilometers from the sun, Ceres pulls its orbit. Far beyond the frost line in the asteroid belt between Mars and Jupiter. There the sun's radiation is so weak that water freezes into ice. Ceres is the largest asteroid in our solar system. A strange celestial body that researchers hardly know anything about. With a diameter of 950 kilometers and an almost spherical shape, it looks more like a planet than the much smaller - irregularly shaped - cosmic rocks that orbit here, also known as asteroids.

Researchers suspect: Around 4.5 billion years ago, Ceres was on the way to growing into a planet. But he got stuck in this development. An early state of our solar system is thus preserved in Ceres, comparable to the mammoths in the ice.

At around two grams per cubic centimeter, the density of the distant celestial body is far too low for it to consist entirely of rock. Researchers therefore suspect a layer of frozen, perhaps even liquid, water up to a hundred meters thick under a solid crust on Ceres. There could be traces of simple life there. The bizarre world may even have an atmosphere of water vapor that is fed from underground reservoirs.

The European Herschel Space Telescope provided the first evidence of this. The celestial eye has detected water vapor in the immediate vicinity of Ceres three times. And that could only have come from Ceres. Calculations showed that the celestial body evaporates six kilograms of water every second into space. Presumably it comes from regions where the layers of ice hidden under the crust have been exposed and the water can escape there. However, the water vapor could also arise from so-called cryovolcanoes. Powered by a heat source inside Ceres, they hurl ice out into space.

Detailed photos should help to clarify the water puzzle in the coming weeks. "As soon as the craters are more clearly recognizable, their shape could also allow conclusions to be drawn about whether there is ice," predicts planetary researcher Andreas Nathues from the Max Planck Institute for Solar System Research MPS in Göttingen, the scientific director of the camera system. It was developed under the leadership of the MPS. Researchers in Göttingen operate the instrument and evaluate the scientific data. Scientists at the DLR Institute for Planetary Research in Berlin-Adlershof then process the images into three-dimensional terrain models. The researchers can then use this to reconstruct the history of the development of Ceres and find out which processes once shaped these landscapes. 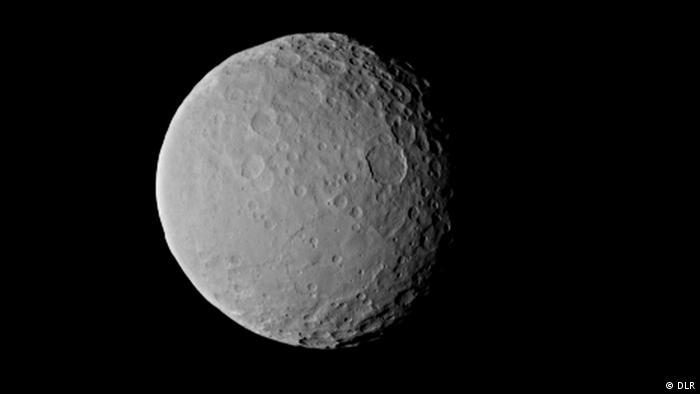 Different craters and many unanswered questions

Promising crater landscapes can be seen in the new images, which were sent to earth by the DAWN space probe on February 19: There are small, rather flat craters - but also impact basins with a mountain towering in the center. The experts estimate that individual craters could be 300 kilometers in diameter.

In addition, Ceres appears to be covered with a solid, crusty layer. Did it form because water ice and other volatiles evaporated from sunlight over time? Was Ceres surface contaminated with foreign material by impacts of cosmic boulders? If so, how has it changed as a result. And where did this bizarre world originate? Researchers suspect: Ceres could also have formed much further out in the solar system - far behind the large gas planets Jupiter, Saturn, Uranus and Neptune. There where Pluto also moves its orbit around the sun. The high water content of Ceres is a possible proof of this.

In addition to the craters, there are also lighter regions to be seen, which, however, cannot yet be interpreted from the previous distance of 46,000 kilometers.

The DAWN space probe will soon answer these and many other questions. On March 6, 2015, the probe, equipped with three research instruments, is expected to swing into an orbit around the mysterious Ceres. And circumnavigate the distant world by 2016. In doing so, it will draw closer and closer to Ceres.

Until, at the planned end of its mission, it is only 375 kilometers from its surface. In this way, it can send ever more detailed images to Earth - up to a resolution of 35 meters - and precisely explore the chemical composition of the soil.

Ceres is already the second celestial body targeted by the DAWN space probe. Launched on its long journey into the asteroid belt in September 2007, the probe entered orbit around the asteroid Vesta almost four years later on July 16, 2011. As the first spaceship to orbit such a cosmic boulder.

Aviation technicians had never dared such a maneuver before. DAWN studied the asteroid Vesta from orbit for around a year. A world that is the complete opposite of Ceres. Vesta is a dry, rocky asteroid while Ceres is a wet world, with an estimated water content of 15 to 25 percent.

Research trip back in time

And these two very different celestial bodies are at home in the asteroid belt. While the rocky Vesta resembles the inner rock planets Mercury, Venus, Earth and Mars, Ceres resembles the icy moons of the gas planets Jupiter and Saturn in the outer solar system.

"The DAWN mission will help us to understand how such water-rich asteroids were formed and how they can still be active today," explains mission leader Chris Russel from the University of California in Los Angeles. The camera system from Germany plays a decisive role in this. 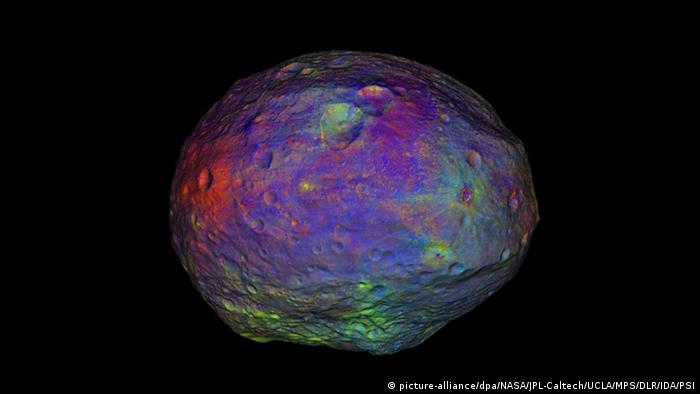 In addition, the opposing worlds allow a look back to the beginnings of our solar system. Both celestial bodies could not develop into planets and got stuck in the early phases of planet formation. While other celestial bodies absorbed more and more matter and agglomerated into planets or broke into small fragments in violent collisions.

The cosmic origin of our existence

Around 4.5 billion years ago, our solar system looked very different than it does today. Instead of the eight planets, first a cloud, then later a disk of gas and dust, revolved around the newly formed sun. Under the influence of gravity, irregularly shaped lumps of matter agglomerated, eventually reaching a diameter of a few kilometers. As a result of collisions, these clumps grew into so-called protoplanets.

Only in the vicinity of Jupiter did a different development take place. Its gravity prevented the formation of planets here. The newly born planetary system continued to change due to the influence of the sun. The inner planets Mercury, Venus, Earth and Mars lost their volatile gas components due to the heat and the bombardment of charged particles that our central star hurled into space. Solid bodies remained. While the outer planets Jupiter, Saturn, Uranus, Neptune and their moons remained rich in water. The DAWN space probe is intended to provide researchers with new insights into how this process once took place between the planets in the inner and outer solar systems.