What are the uses of formalin

Due to its carcinogenic effect (Category 1B), the storage and use of formaldehyde is prohibited in general education schools in Germany according to the RISU. Biological preparations must no longer be placed in formaldehyde solution. According to the RISU, old preparations with formaldehyde may still be stored. However, these may not be stored in a classroom. The author recommends that Switzerland and other countries not keep this material in schools. Experiments to detect formaldehyde in materials from contaminated sites are only justifiable if it is guaranteed that a hazard is excluded. Reasons:
Effect on the human body

Formaldehyde can be produced in traces during metabolic processes in the human body. In the pure state, formaldehyde, which belongs to the aldehydes, is a colorless, pungent smelling gas. Chipboard containing formaldehyde can be recognized by its slightly sweet and pungent smell. The vapors irritate the eyes and mucous membranes. Particularly sensitive people experience severe shortness of breath even when inhaling the smallest amounts, as the reactive substance reacts immediately with the mucous membrane cells. Contact with the aqueous solution leads to chemical burns. Eczema often develops on the nose or face. Formaldehyde causes allergies and cancerous tumors in the upper respiratory tract in humans [Lit. including assessment by the Federal Office for Risk Assessment, Toxicological Assessment of Formaldehyde, BfR No. 023/2006 of March 30, 2006].

If the aqueous solution is swallowed, serious internal injuries to the digestive organs occur, which can also lead to death. A damaging effect on the immune system has been proven. Neurological damage is described in the literature. These manifest themselves, for example, in severe headaches or in a reduction in cognitive performance. [Lit. Kilburn KH et al: Neurobehavioral and respiratory symptoms of formaldeyhde and xylene exposure in histology technicians, Arch Environ Health 40: 229, and other publications by Kilburn 1987 and 1989; For teratogenic effects in rabbits, see Al-Saraj AA: Teratogenic effects of formaldehyde in rabbits. Iraqi J Vet Sci 23: 1-4, abstract at www.drthrasher.org/page118.html; see also CSN blog: Silvia K. Müller: Medical students sick through formaldehyde, in Chemical Sensitivity Network, February 17, 2012, there with further literature sources, e.g. Lakchayapakorn 2010]

The reactivity of formaldehyde is also very problematic; with other substances it tends to form products that are significantly more toxic than formaldehyde itself. The observed effects can probably only be fully explained with these products. For example, bischloromethyl ether is formed with hydrogen chloride. This highly flammable liquid is one of the most well-known carcinogenic substances. It is also highly toxic if inhaled and can cause lung damage. The reaction can occur in a laboratory cabinet if fuming hydrochloric acid and formaldehyde solution are stored together. It is also possible if hydrochloric acid is stored in a cupboard with chipboard containing formaldehyde.

Formaldehyde can react with the protective acid layer on the skin and it can be absorbed through the skin. Unfortunately, such effects have so far only been little investigated. Formaldehyde and its reaction products are typical toxins for the home, as they tend to be stored in building materials and thus cause renovation cases.

Formaldehyde gas dissolves very well in water, but also in ethyl alcohol and diethyl ether. It is flammable, mixtures with air are explosive. An approximately 36.5% solution of formaldehyde in water is commercially available, which is usually mixed with ten percent methanol for stabilization. If the solution contains small amounts of impurities, it tends to polymerize. For this reason, non-stabilized formaldehyde solution gradually polymerizes to paraformaldehyde:

Formaldehyde and all other aldehydes can initiate a large number of chemical reactions. When reacting with phenols, phenolic plastics are formed in a polycondensation. If, for example, formaldehyde is mixed with resorcinol and only a little hydrochloric acid is added as a catalyst after gentle heating, a red phenol paste is formed. 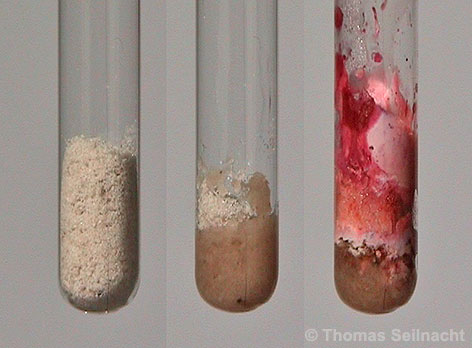 Formaldehyde solution is added to resorcinol. After heating and adding
a drop of hydrochloric acid produces a red phenolic plastic in a violent reaction.

This attempt is problematic for schools. >Movie
With ammonia, formaldehyde forms hexamethylenetetramine, a hexavalent alcohol that can be processed with nitrating acid into the highly explosive hexogen. The primary alcohol methanol can be produced by adding hydrogen to formaldehyde:

CH3OH
The detection of formaldehyde and other aldehydes in aldehyde-containing solutions or products is carried out with the Schiff's sample. If an aldehyde is present, the colorless solution turns purple.
In the laboratory, one could just barely produce detectable amounts of formaldehyde with oxidized copper. If an oxidized copper wire mesh is immersed in a test tube with methanol, the copper oxide of the wire mesh is reduced to pure copper again. Then methanal is formed with elimination of water: 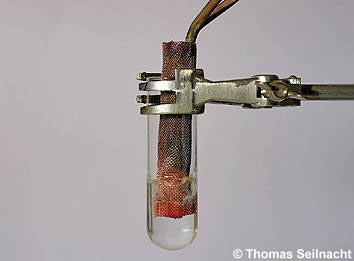 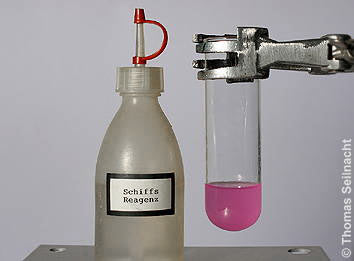 When a heated and oxidized copper wire mesh is immersed in methanol, methanal is formed,
that can be detected with Schiff's reagent.