Lampard on self-doubt, transfers & pressure - "Pissed off" at Derby County

Frank Lampard achieved everything with Chelsea as a player. In 2012 he won the Champions League with the Blues, from 2005 to 2010 the native of London and 106-time England international was three times English champion. Lampard returned to his long-term employer as a trainer in July 2019. For the portal “The Athletic”, the 42-year-old spoke extensively with ex-striker Alan Shearer about his first year on the sideline of the Blues, the changes after the end of the transfer ban and the pressure on him from the intense transfer summer and his Relationship with investor Roman Abramovich, whom he has known since he joined in 2003.

“My first personal memory of Roman was flying into our old training ground at Heathrow and coming over and meeting us while the helicopter calmed down. It was pretty surreal. The first thing he said about a translator was, 'Well, we have to improve the training ground.' And immediately you think, 'OK, the standards will go through the roof immediately.' And they did, ”Lampard explained and gave an insight into his first period at Chelsea. In 2003/04 the club spent 170 million euros on numerous new professionals such as Hernán Crespo, Damien Duff and Juan Sebastián Verón.

“We signed big players in the first year. There was some fear among us younger players of what that meant. A couple of us managed to stay in the game and the level rose around us. It was the most successful period in the club's history and we couldn't have done any of it without the owner - consistently winning trophies, building a new training ground, building the squad, investing the capital in the club, making us a global brand, ”led Lampard, who started his coaching career at Derby County in 2018 and almost made it to the Premier League. "You don't get the Chelsea job after a year at Derby County, that's not the norm," said Lampard.

Director Granovskaia brought Lampard back to Chelsea as coach

“When I came back to the club, it was Marina Granovskaia (director; d. Editor) who contacted Derby and myself to make it possible. I saw Roman in preparation last year, and it was big smiles and not cuddles, but greetings and handshakes. I haven't had very close contact with him since then, although I teach him about my thoughts on the games, where I see us and where I see how we consistently move forward through Marina, and I'm very happy about that. " Lampard feels the support “from afar, but it's very straight forward, very short and sweet, and that's how I try to give it back. When I comment on how we play or perform, I don't leave the bush. Good or bad, I think that's the right policy for a man of this level. He's a man who makes things work, without that you can't get to your position ".

I had a lot of doubts.

After joining Chelsea from Derby, Lampard “wanted to make a positive impact because I knew my name and the ex-player thing wouldn't last that long. So yeah, I had a lot of doubts. I got to work. One thing I'm pretty good at is trying to listen, learn, and respond. I am open to it. I'm my own biggest critic, so there are a lot of things from last year, a lot of little moments when I look back and try to keep improving. "

CommunityAll topics related to Chelsea FC Now have a say! As a player, Lampard became a club icon between 2001 and 2014, playing a total of 648 competitive games for the Blues - only John Terry was able to play even more. The former world-class midfielder does not see his reputation endangered by a possible lack of success in the coaching bench: “You shouldn't think about that. It doesn't really bother me. (...) I want to be successful, this is my club and always will be, even if the fans push me out the door because I wasn't successful. " 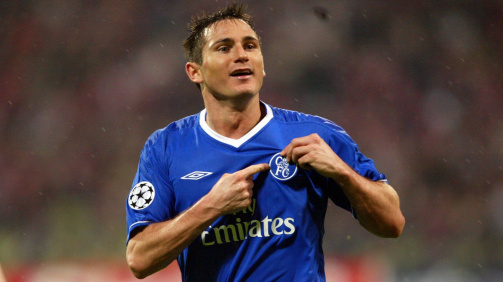 Giving everything for Chelsea as a player: Frank Lampard made the second most games for the Blues

Commenting on his status, he said: “My playing career had a lot to do with it and the transfer ban and the question of which great coaches might have taken the job meant that things were likely to work out in my favor. Other than that, the loss of Eden Hazard was a big deal. For me, since Cristiano Ronaldo, he's the only absolute world-class player who left the Premier League at his best. Maybe you could add Gareth Bale. In a time after that, with younger players, there will be ups and downs and a phase of transition (...). ”The 29-year-old Belgian Hazard left Chelsea in 2019 for the club's record transfer of 115 million euros to Real Madrid.

Chelsea after the transfer ban: Talents like Mount came into focus

Due to a transfer ban imposed by FIFA, which has now been paid for, Lampard was more or less forced to rely on young players such as Mason Mount, Tammy Abraham, Reece James and Fikayo Tomori. “I understand why previous coaches didn't bet on young players because a lot of them came and were under pressure to win straight away and sometimes these players weren't ready. For me the circumstances were a little different, but the guys deserve the credit because each of them has proven himself in his own way, ”said Lampard. It's great to work with the youngsters because they want to learn. The ex-professional assesses the fact that precisely those players have established themselves in the first eleven extremely positively: “They have all shown that they deserve to be there.” The Chelsea squad in detail.

Clubs with the highest spending within a season

2019/20 was a “transition year” for Chelsea because: “We no longer had the players from earlier eras. Eden was such a great player. People like Diego Costa and Cesc Fabregas. Before that it might have been myself, John Terry, Didier Drogba and Petr Cech. Last year we had younger players and we were looking, so it felt different. I know this won't last forever. I've already said that this year will look different. ”In terms of the overall squad, Chelsea are third behind the last Premier League champions Liverpool and Manchester City.

HistoryAll arrivals and departures of Chelsea FCOverviewWhether he feels pressure to succeed from Abramovich, Lampard is unable to judge. In view of the highest transfer spending by a club in an international comparison last summer - Chelsea invested almost 250 million euros in newcomers such as Timo Werner, Kai Havertz and Hakim Ziyech - the signs have now changed significantly. "I still have the feeling that we are evolving, that the plan may not work this season but next season in order to be really competitive and to achieve the consistent level that Liverpool and Manchester City can offer," said Lampard who seems to be aware of his responsibility.

“I know we have a stronger squad this year. When you've spent the money we've spent, we need to fill the void, no doubt about it. How far we can close them will be defined in the end. It feels like we're within reach ”, Lampard clarified and reminded that his team was“ in a process ”. In his first year on Chelsea's sideline, he finished fourth and qualified for the Champions League - after nine match days of the current season, the Londoners are third.

Lampard perceives being a coach as a pleasure, if you take his remarks as a yardstick. "It can be tough if you don't get results and try to find solutions, but if you took that away from me tomorrow (the coaching job), I would be left with a massive emptiness," said Lampard, veteran coach Roy Hodgson admired, who looked after Crystal Palace at the age of 73. "I'm not sure I would go that far because it's so exhausting, but I want to do my best to be successful with Chelsea as long as I can."

One thing is clear to Lampard: When you start a job as a coach, it is with skin and hair. "You have to jump in." Just like he did at his first stop in Derby County. “The first day I came to Derby, I wiped my pants. I really have. It came so quickly for me. I met Mel Morris, the owner. I was offered the job, which was a big step for him and a big step for me. I had played against many of the players. I played with some of them for my country. It's about how to package the first meeting, the first training session, what you want to become. That’s so important. I had all these worries. "