It was possibly the most engagement-driven competition that has ever taken place on Instagram: An Instagram post by Bianca Claßen alias "BibisBeautyPalace" has recorded a record 15.86 million comments so far, in which the beauty influencer and the bargain site Dealbunny.de have several had offered high-priced prizes for raffle. In the meantime, Dealbunny has gained more than half a million followers. OMR spoke to the Dealbunny operators and asked influencer marketing experts how they rate the action.

"THANK YOU for 7 million followers here on Instagram - I'm still totally overwhelmed! As a thank you, I'm giving away 15 big prizes together with @ dealbunny.de, ”wrote Bianca Claßen on Instagram on December 28th. Just two weeks earlier, she had reached seven million followers with her account. That gives the team of the bargain affiliate website Dealbunny.de an idea: Why not organize a competition for this occasion in cooperation with Claßen?

iPhones, Macbooks and a switch are supposed to push the commitment

"We asked about the cooperation spontaneously," said Dealbunny managing director Torsten Kiefer to OMR. After around 200 campaigns carried out in 2019, the one with Bibi was the last one in 2019. "It was really tricky to plan such a campaign at short notice over the Christmas period, but it was possible thanks to the professional way of working of everyone involved."

The mechanics of the raffle: Those who want to take part in the raffle should like the raffle post, post a comment underneath and follow both BibisBeautyPalace and Dealbunny.de. Prizes include 15 prizes, including several devices from Apple (iPhones, MacBooks and Airpods), Nintendo (the Switch game console) and Dyson.

The attractive prizes ensure massive engagement very quickly: "After an hour, a million comments were written and Dealbunny won the first 100,000 fans," said Kiefer. "After six hours we had already won 300,000 fans with Dealbunny, cracking the number of one million fans." There is a special prize (a MacBook Air) for users who share the competition in their Instagram story. “That placed us in thousands of stories every day,” says the Dealbunny managing director.

The campaign generated tremendous attention: "Our account had 64 million impressions in the week of the competition and reached over 900,000 accounts that opened the Dealbunny profile 1.2 million times during this period," says Kiefer. By the closing date for entries on January 6th, Dealbunny will gain more than 523,000 and BibisBeautyPalace 260,000 new Instagram followers.

Did you miss a few thousand comments on the new record?

Torsten Kiefer is nevertheless satisfied with OMR: “The boost that comes from this campaign has initially exceeded all expectations of our social media team. We expected Bibi to have power - and we have already cooperated with some top influencers and had also made a forecast. But we didn't predict that Bibi's fans would react so quickly and that 100,000 fans would follow after one hour. "

A quarter of the newly won followers are already gone

However, Kiefer does not want to give a final verdict yet: “After the first few days, we definitely spoke quantitatively of a complete success. We have currently already lost over 25 percent of the fans we won due to the draw, so that we can only carry out an accurate assessment of the campaign in terms of qualitative aspects here after several weeks. 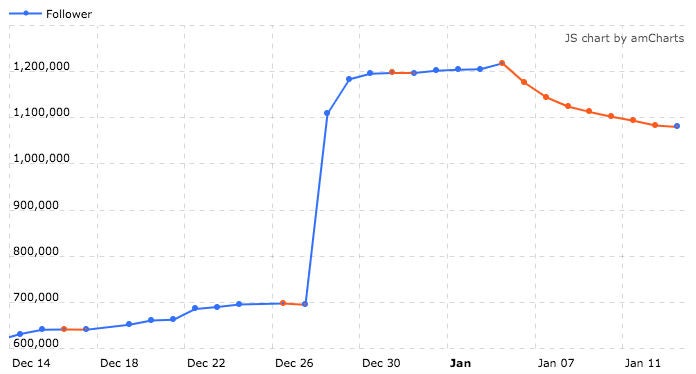 The development of the number of followers on Dealbunny's Instagram account initially shows a clear jump after the start of the competition. The number of subscribers has been falling again since the draw. (Graphic: Ninjalitics)

Dealbunny informs users via the company's own Instagram account, an app and a website about current discount campaigns, vouchers and bargains in online shops. "We want to concentrate on the best and most popular offers of the day," said the managing director. If the users then complete a purchase, the dealbunny makers usually receive a commission from the online shop operator - a classic affiliate marketing business model.

With bargains of 20 million euros in external sales

The company claims to have 15 employees. "We broker goods and services worth over 20 million euros every year," says Kiefer. The Dealbunny managing director did not want to provide OMR with any information on internal sales. Assuming an average commission of five to ten percent, internal sales would be between one and two million euros.

Dealbunny generates new users and traffic for the deals mainly via Instagram. Apparently successful: In 2019, the bargain site was one of the German growth champions on Instagram after absolute growth; 2018 among the growth winners by percentage growth. Kiefer does not want to give any information about the costs of the cooperation with Bibi, but simply says: "In principle, we are aiming for a cost-per-follower of less than 0.50 euros for all unknown cooperation partners and new environments."

The assumption that Dealbunny fell significantly short of this price when cooperating with Bibi is not too daring. "I estimate the cost of this cooperation for Dealbunny at 40,000 to 50,000 euros," said Chris Kastenholz from the Hamburg influencer marketing agency Pulse Advertising to OMR. “Bibi published both posts and stories about the competition. As a result, according to our estimates, around 20 million impressions were generated with the campaign via Bibi's account alone. With the cooperation price I estimate, that would be equivalent to a cost-per-thousand impressions of EUR 2.00 to EUR 2.50. "

Even if you reckon with total costs of 60,000 euros for the entire campaign (after all, the costs for the prizes are added), the price per new follower should currently have been around 15 cents for 386,000 new followers. "That was a win-win situation for the advertiser and the influencer," says Kastenholz. Bianca Claßen has probably also been able to significantly increase her Instagram account and its organic visibility: "With 1.1 million likes and 15 million comments, Instagram's algorithm gives an account a significant push upwards." 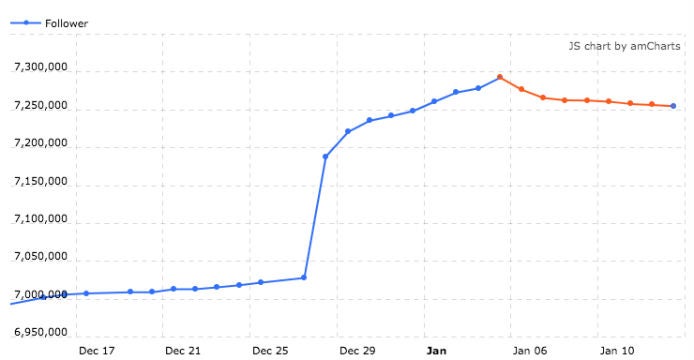 Do such competitions damage the brand?

Sven Wedig from the Berlin influencer marketing agency Vollpension Medien was more skeptical towards OMR: “Personally, I am not a fan of traffic generated artificially with such methods. If you can see in the comments that many users have commented several times, it always seems a little fake. "

Wedig believes that when evaluating the action, multiple perspectives should be considered. “If the advertiser buys this at a good price-performance ratio, he will probably have at least temporary success with such a campaign. How it will affect a brand in the long term is another question, ”says Wedig. “Looking at the influencer, I believe that postings like this tend to damage her credibility and make her unattractive for top brands. In contrast, there is also a temporary gain for her, but I assume that it will not be sustainable. And with a look at the followers and the platform, I assume that the Instagram algorithm will not like such short-term peaks. And according to the tone of their comments, Bibi's core fans are not very happy with it either. "