Is Trump the epitome of a right-wing extremist

Who suggested neo-Nazis support Donald Trump? The Breitbart platform and Stephen Bannon weren't the only ones. 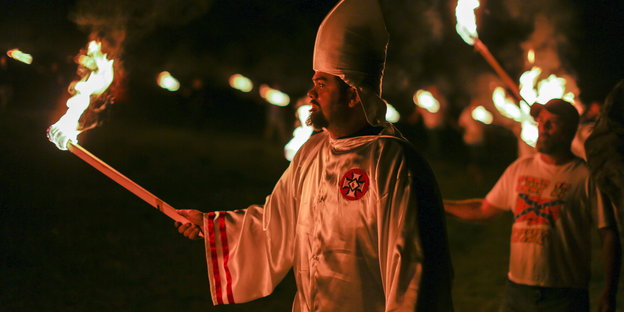 Members of the National Socialist Movement and the Ku Klux Klan at a ceremony in Georgia, USA Photo: dpa

Until Donald Trump was nominated as a Republican candidate on July 21, 2016, his relationship with the White Supremacists remained curiously unclear. The extremists praise him as a white hope, doggedly defend him and deliberately ignore everything that makes the New York billionaire's sympathy for racists and neo-Nazis seem unlikely.

“Trump understood that he couldn't win without her,” David Duke tells me while he is having his favorite breakfast oysters with coffee with milk. "But I think he hates the Jews."

For his part, The Donald said in front of the CNN cameras in February 2016 that he didn't know any White Supremacists - and certainly not a David Duke. When asked again a few days later he said: “Who will support me, David Duke? I refuse, okay? ”But the primaries have shown Trump and his team: The potential of right-wing extremists goes well beyond a few tweets and videos.

"You cannot explain right-wing extremism if you don't analyze it as a social phenomenon," says political scientist and expert on US right-wing extremism Thomas Grumke from the University of Applied Sciences for Public Administration in North Rhine-Westphalia. “This movement consists essentially of full-time activists who do nothing but organize, publish and recruit new followers. Then there is the group of direct supporters, they take part in the demonstrations, are present at all meetings, are active online and offline. They are joined by the sympathizers who occasionally take part in actions - and finally the mass of silent supporters. We know least about them. "

These are our neighbors and work colleagues who find confirmation on the Internet for their fears and frustrations about a society that is actually changing. They would never call themselves Nazis, but like or retweet posts that see a Jewish plot at work behind the phenomenon of migration.

Steve Bannon, Trump's guru and campaign manager, has understood the potential of this crazy fascination for Nazis 2.0. Former Hollywood producer and Goldman Sachs man, Bannon does not seem to be the born Nazi leader: For people like Duke or Heimbach, Goldman Sachs is the headquarters of Zionism and Hollywood is their ministry of propaganda. Even a few anti-Semitic remarks by Bannon, disgusting as they are, do not necessarily make him seem compatible with a fanatical Jew-hater like David Duke.

The author: Riccardo Valsecchi, 41, is an Italian journalist. In Berlin he wrote for the taz and made films about racial profiling and racism.

The research: Valsecchi has lived in the USA since 2015, where the film "The Nazi Hustle" was made, which was shown at festivals in Italy. This undercover research, which Valsecchi traces in three parts in the taz, is about the alt-right scene against the background of Donald Trump's presidential candidacy. Trailer of the film at: vimeo.com/189136448

In fact, it is precisely the nastiest US Nazis who are very surprised when Bannon is the boss of Breitbart This Internet portal is declared to be the platform of the Alt-Right movement - only then do Heimbach, Schoep, Spencer become even for the media the Alt-righters! It fits that I never heard the word "alt-right" at all meetings with neo-Nazis in the USA and Europe. It works like an ingenious invitation to right-wing extremists to become part of something bigger and new, to finally get out of the dirty corner and bring Nazi ideology into the center of the discourse.

But Breitbart and Bannon are not the only ones who encourage the neo-Nazis to support Trump. Immediately after Trump's election as a candidate at the end of July 2016, I call Duke: “Big things are happening here,” he shouts excitedly into the phone, “I'm in the middle of a huge campaign. When do you come over?"

I'm coming with a Ukrainian camera assistant. In front of the modest house in a gated community in Mandeville, three men sit, they smoke and joke. I recognize Duke's brother-in-law and Patrick Slattery, who is on the news column davidduke.com supervised. The third person introduces himself as Mike Lawrence, then campaign manager Dukes, who proudly presents his Porsche. Inside, David Duke is sitting in front of the computer. The apartment is filthy, the table is full of vitamin pills and empty energy drink cans. On the floor there are open cardboard boxes with “Trump-Duke” baseball caps and “David Duke for Senate” banners.

Friends in Kiev and in the Kremlin

So this is the “big campaign”? I ask about the next events, nobody can give me an answer. Only when I introduce my assistant does the “headquarters” come to life. Duke's first question is: "Are you a Jew or a Christian?" Then he lists all of his friends in Kiev and in the Kremlin: "Dugin, do you know Alexander Dugin?"

When Duke got out of prison in May 2004, he wanted out of the USA. In 2005 he is in Ukraine, where he is doing his doctorate at the anti-Semitic cadre school MAUP University, the title of his thesis: “Zionism as the greatest threat to humanity”. Duke teaches for a few months at the Ukraine University of Hate, as it is called by the Anti-Defamation League, then goes to Moscow. But there is nothing like his first stay in the 1990s. "The people who were supposed to manage my properties cheated on me."

The new Duke is a lonely man, whose Nazi reputation brings him an invitation to Bashar al-Assad's Syria and a Holocaust denier tour that includes Tehran, the Czech Republic, Hungary, Spain and Germany, but who cannot move anything politically . In Moscow he now has to ingratiate himself with the Russian ultra-nationalists instead of being asked for himself. Many US Nazis are now flocking to Moscow for workshops and conferences, they become defenders of Russian nationalism and its hero Alexander Gelevich Dugin, adviser to President Putin and chief ideologist of “Neo-Eurasimus”.

His goal: an ethnically “pure”, white empire from Vladivostok to Dublin with Russia as the hegemon. US Nazi Mathew Heimbach expresses his admiration for the new Rasputin: “I am a big fan of Professor Dugin. His books are required reading for all leaders in our party. I am very proud that a speech by Professor Dugin is played before every meeting of our party and that in this way we express our solidarity with our Asian comrades. "

Everything inside is surreal

Duke's candidacy for the US Senate to replace Republican David Vitter causes general outrage. But this does not detract from the support provided by new network media. One of them is RedIce.tv the Russian-American Lana Loktef and the Swede Fredrik Palmgren. If Breitbart the cool face of the alt-righter is will RedIce to the platform where white hatred can live out quite openly - and where Putin's greatness is praised.

I will last meet David Duke on November 2, 2016, six days before the election. Despite all the polls, he managed to pass the 5 percent hurdle in the primaries. He is allowed to take part in the last TV debate of Louisiana's candidates for the US Senate. Much to Duke's displeasure, the debate takes place at Dillard University, the "Black Historical University". 150 activists protest against the former KKK boss and try to gain entry. The campus police use pepper spray and six demonstrators are arrested.

Everything inside is surreal. Each candidate says how unbearable it is for him to sit on the podium with a Nazi. Duke, on the other hand, argues against everyone, including the moderator, and declares himself to be the only true Trump supporter. At the end he storms into the press room and screams. Then he escapes and gives in the back seat of his car RedIce.tv a live interview celebrating his triumph. The rest is history. On November 8, 2016, Trump was elected President, David Duke got 3 percent of the vote, but $ 193,000 in reimbursement of campaign expenses, of which at least 50,000 ended up in his pocket. Crosses are burning everywhere in the USA, even if there is no representative of the scene in the Trump administration.

But that was clear from the start, at least for the extremists. For Duke it was probably the last attempt; many see the future of the movement as embodied in the young Heimbach. He says: “The West is on the decline, it will go under. And from his ashes only one will rise like a phoenix: us. "

From the Italian by Ambros Waibel

Read Part 1 and Part 2 of the series on the Alt-Right movement here.