Can Australia leave the monarchy voluntarily

In the state of Australia, both the central power and the federal units each have almost all government institutions, in the manner typical for a parliamentary democracy in the tradition of common law. It appears that the Australian Constitution gives each local authority a considerable degree of independence in the organization and operation of its institutions. As in every federal state, however, the federal character of the political order influences the structure and functioning of the institutions in various ways and, conversely, the dynamics of the federal system are influenced by the choice of institutions. Some of these mechanisms are the result of the original design of the system of government. Others are the result of developments in the more than 100 years since the Australian Constitution was passed, such as the need for governments to rely on increasingly complex forms of intergovernmental relations.

Australia has been settled by the British in 6 separate colonies along the coast of the Australian continent and on the island of Tasmania since the late 18th century. For the next 100 years, in the British tradition, the colonies developed their own governments with their own constitutions and institutions of their own. At the end of the 19th century, each colony had a parliamentary system with a two-chamber legislature, from which ranks the executive was determined. The head of state was a governor who represented the crown. In addition, there was a judicial system with a Supreme Court as the final instance within each colony, from which the Royal Council in London could be appealed to.

The colonies united in 1901 in a federation, for the constitution borrowed primarily from the British and American constitution. As a result, the Australian Constitution combines a British-style parliamentary government with a federal system that roughly corresponds to the American system. It assigns certain functions to the Australian Commonwealth, mostly in the form of competing legislation, and leaves the remaining powers to the states. It also sets the framework for the Commonwealth of government institutions: parliament, executive and courts. This framework has been interpreted as prescribing a division of powers, giving particular importance to the courts, since the degree of separation of legislative and executive in a parliamentary system is necessarily relatively small.

It seems that every government area in the state of Australia is fully equipped with all the necessary institutions. However, there are a few exceptions, the most important of which concerns the courts. While each branch of government has its own judiciary, the Constitution allows the Commonwealth Parliament to delegate its sovereignty to the state courts - which it often does. Prosecution under federal law is an example of this. Even more important - and in a significant departure from the American model - is that Australia has a single supreme court of appeal, the High Court of Australia, for the federal and state court systems. One result of this regulation is that a single, common right exists for the whole country.

A rather unusual deviation from the American model is the monarchy. Australia is still a constitutional monarchy with Queen Elizabeth II serving as head of state in her capacity as Queen of Australia. It is represented at the level of the Commonwealth by the Governor General and at the state level by the Governors who carry out practically all of its duties

fulfill. This pattern of representation for the Queen of Australia is consistent with the dual model. The monarchy itself, however, is an institution with no closer relationship with other areas. In 1999 a first attempt to introduce the republic in Australia failed. In the event of any further attempt, it will be necessary to carefully examine what would be a sufficiently democratic and federal way of appointing a head of state.

Despite the duality of the institutions of the two levels of government, federalism has had a very considerable influence on the design of the central institutions. Obviously, the Commonwealth Parliament consists of two chambers: a House of Representatives representing the people and a Senate, which is designed as a federal chamber. Each founding state has the right to an equal number of senators (currently 12), and the 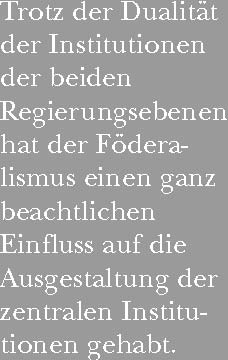 As a rule, the senators and MPs act as representatives of their party and not as representatives of their states, although they probably bring the perspective of their own states into the negotiations. Within the Senate, the senators typically vote with their party. As a rule, the majority in the Senate is different from that in the House of Representatives. In this way, the Senate functions as a supervisory authority of the system: it can block government bills and demand further negotiations on them and thus review the actions of the government more closely than the House of Representatives. There is a method of dissolving blockages, but - at least for the purpose for which it was created - it is time-consuming and arduous.

Australians are divided on the merits of the Senate in overseeing government power in the House of Representatives. However, changes are unlikely. Recently, an attempt by the Commonwealth of Nations government to arouse interest in a constitutional amendment to make the blockade process so failed

What should be simplified is that the House of Representatives is more likely to prevail. By now the question may have lost its relevance. In 2005, the governing coalition also won a majority in the Senate for the first time in 30 years.

There are other, less obvious examples of federal influence on the design of central institutions. The constituencies are bound by state borders. Every state, regardless of population size, has the right to at least five members in the House of Representatives. The Commonwealth of Nations government is required by law to consult states on appointments to the High Court. Many Commonwealth entities have offices in most or all of the states. Constitutional amendments require a positive result in a referendum, both with a majority of the electorate in a majority of the states and with a majority at the national level.

The formal dualism laid down in the Australian constitution is changed in practice to a considerable extent by far-reaching intergovernmental cooperation.

In almost all areas of government activity, ministers from all territories meet at least once a year. There is now an extensive network of ministerial advisory bodies, accompanied by intergovernmental meetings of civil servants and officials with other functions, such as parliamentary speakers. At the head of this complex is the Council of Australian Governments (COAG).

In addition, there are now highly complex intergovernmental legislative processes in Australia that are effective in ensuring the uniformity of law and administration in matters for which the Constitution provides for shared responsibility between governments. Typically, these procedures are agreed at meetings of ministers, who can usually rely on their parliaments to implement them when legislation becomes necessary. This form of executive federalism is now a salient feature of the Australian Federation.

Intergovernmental cooperation is taking place in Australia, a country with a relatively small and essentially homogeneous population of 20 million people, in response to demands for greater efficiency. Given the constitutional structure of the system of government, where governments are accountable to their state's parliament and courts, some forms of cooperation also raise concerns about transparency and accountability - concerns that have not yet been successfully addressed.