People with albinism are usually noticeable by their appearance: their skin and hair are light blonde to white, the eyes appear pink to pale blue-gray. The cause of this is a group of congenital metabolic diseases that lead to a disruption in the formation of the dark skin and hair pigment melanin. Symptoms of albinism often include severe visual disturbances. The cause cannot yet be treated, which means that albinism is incurable. An overview.

Albinism and other hereditary diseases

Excursus: albinism in the animal kingdom

The term albinism is derived from "albus“Ab, the Latin word for white. This is a collective name for congenital metabolic diseases, which ensure that those affected suffer from a disruption in the formation of the pigment melanin. Melanin stains the skin and hair as well as the retina and iris in the eye. This means the color of skin, hair and eyes is determined by melanin in combination with genetic predisposition. This pigment is produced in the so-called melanocytes of the skin as well as in the choroid and iris of the eye. In albinism patients this is Melanin production disturbed, very little is formed, sometimes even none at all. As a result, the skin and hair are hardly pigmented and the eyes and eyesight are also affected.

Accordingly, different forms of albinism are distinguished: Those in which Skin, hair and eyes are affected (oculocutaneous albinism) and those who only in the eyes (ocular albinism) occur.

How common is albinism?

About 5000 people in Germany suffer from it Albinism - around one in 20,000 worldwide. The most common sick people are in Africa: Here at least one in 10,000 people is affected.1 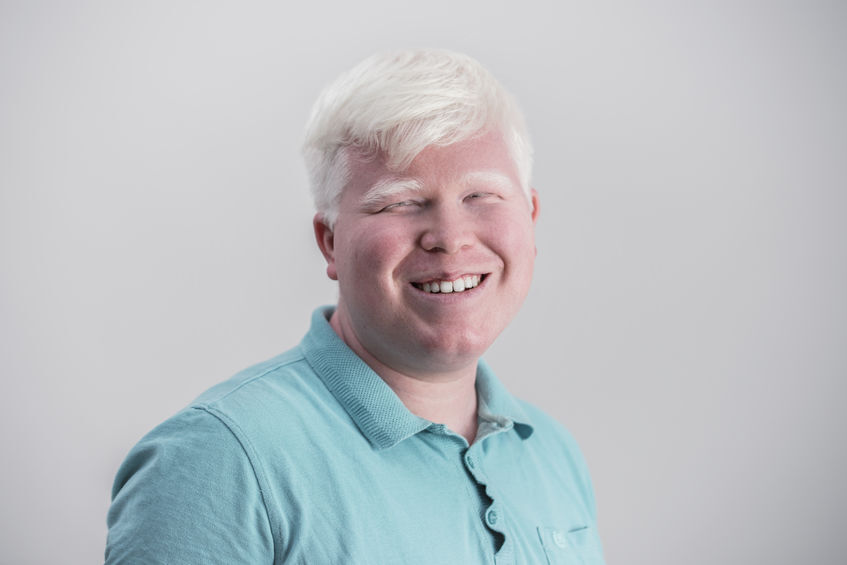 The Symptoms of Albinism are different from person to person. Depending on the extent to which the formation of melanin is disturbed. This in turn depends on the Severity of albinism.

The visible symptoms of albinism usually include:

Interesting: Are the eyes of people with albinism really red or pink?
No. The eyes can be very bright, which causes the fine blood vessels to show through. This makes the eyes appear red or pink in albinism; however, it is not a direct red coloration of the iris.

Melanin not only colors skin and hair, but is also an important protective function of the body against UV radiation. Because of this, people who suffer from albinism are usually very sensitive to sunlight. Frequent sunburns are the consequence, from which again an increased Risk arises from skin cancer to get sick.

In addition to the visual symptoms of albinism, there are also those that have the Affect eye function. For example it can Spatial vision impaired be affected squint, have a pronounced Astigmatism, are special sensitive to light and diaphragm (photophobia) and / orare strongly farsighted or nearsighted. In addition, around 90 percent of sufferers have a congenital one Nystagmus on.2This is an uncontrollable, rhythmic trembling of the eyes. The reason for the eye problems is again the lack of or missing melanin. The substance is involved in the development of some components of the visual complex.

In addition to physical ailments, people with albinism can also have mental health problems or even suffer from depression. The unfamiliar appearance can lead to affected children being marginalized and teased by classmates. The negative experiences with fellow human beings may encourage social withdrawal.

Causes and forms of albinism

In albinism, various genes that can be passed on are mutated. Albinism is inherited recessively. This means that the gene must contain the mutation on both DNA strands of the chromosome pair (alleles). In short: Mother and father have to carry the mutation in themselves for the disease to actually break out in the child. However, studies have shown that both alleles of a gene rarely carry exactly the same mutation - each of the two genes is deactivated, but due to a different mutation. Conversely, this means that there is no functioning gene and that albinism occurs as a result.

However, the mutations all have one thing in common: They disrupt melanin synthesis. Depending on which process is involved in the formation of melanin different forms and degrees of severity of albinism differentiated.

The OCA1 type is due to a mutation in the gene that is responsible for the activity of the so-called tyrosinase. This is the enzyme that helps make melanin in the first place.

Olulocutaneous albinism type 1 is the most common type of albinism in Europe.3

A distinction is made here between two sub-types that also affect the symptoms:

Oculocutaneous albinism type 2 is the most common form of albinism worldwide. The disease affects about one newborn in 15,000, with black Africans being diagnosed more often.4

The cause of this form of albinism is a defect in the so-called P gene. P stands for "pink eye". This genetic defect was first discovered in mice, where it causes the noticeable changes in the eye. But here, too, the name is misleading, as albino mice do not have really red eyes either, but only very light ones, so that the fine blood vessels shine through. The human gene has also been named the P gene. As with type 1, tyrosinase is restricted - just in a less pronounced form.

Oculocutaneous albinism type 2 does not result in a complete inability to produce melanin. A light to normal pigmentation of the skin and hair remains. Those affected often develop pigmentation and moles over time. The hair can be yellowish, blonde, or even brown. That is, especially in fair-skinned people, the disease can hardly be externally recognizable compared to healthy relatives.

This form of albinism also affects the eyes, so those affected usually suffer from it Sensitivity to light, impaired visual acuity, and nystagmus (uncontrollable, rhythmic trembling of the eyes).

This severity of albinism is very rare and occurs due to a defect in the so-called TYRP1 gene. This is a protein that is involved in building melanin.

Affected have red, brown or reddish brown hair, reddish brown skin and brown to greenish brown eyes. As a rule, this form of albinism is more likely to occur in dark-skinned people.

The so-called MATP gene is changed here. The product of this gene actually serves as a transporter for the proteins of the melanocytes (which produce melanin).

The symptoms of this form of albinism couldn't be more different: They range from one slight lightening of the skin up to complete albinism. Also the The degree of visual impairment varies.

Special form of ocular albinism (OA1): Only the eyes are affected

The cause of ocular albinism is a so-called G-protein-coupled receptor. This is responsible for the formation and transport of melanosomes (located in the melanocytes and stores the melanin). The OA1 is inherited in an x-linked recessive manner, therefore It is mainly men who suffer from the disease. In ocular albinism, only the eyes are affected, but the skin and hair color are normally dark.

The following complaints can occur to varying degrees:

In addition, there may be other symptoms of albinism in the eye area. These include decreased contrast vision, severe astigmatism, squint (strabismus), eye tremors (nystagmus) and / or nearsightedness or farsightedness.5

Albinism and other genetic defects

Albinism doesn't always have to be the only disease, there are others Hereditary diseases that can appear together with albinism. This happens when the genetic defect is on the same chromosome.

Depending on how pronounced the albinism is, one may be enough Visual diagnosis in the newborn, in order to be able to roughly classify the disease. Even babies' skin and hair can be extremely light. Further tests can confirm the suspicion:

The ophthalmologist will examine the eyes. It is often noticeable in affected babies with albinism that they cannot fix their parents with their gaze. Healthy babies usually learn this in the first two months of life.

Albinism therapy: is albinism treatable and even curable?

It is only possible that the Relieve discomfort and other diseases that may result (such as skin cancer).

Sick people must first and foremost theirs protect sensitive skinto avoid sunburns and malignant skin tumors. This includes the consistent use of sun protection with a high sun protection factor as well as wearing long clothes and sun hats. Sunbathing and midday sun should be avoided as a matter of principle. In addition, regular medical examinations for abnormal skin conditions are advisable.

As for the problems with the eyes in albinism, there are a number of ways to improve vision:

The ophthalmologist takes care of the correct treatment and regular monitoring of the status quo.

If those affected suffer mentally from the illness and the associated limitations, psychological support may be necessary. In addition, sick people can also join a self-help group. In this country, for example, that would be the "NOAH Albinism Self-Help Group".

The Life expectancy for people with albinism is normalas well as the mental development of affected children. Appropriate protective measures significantly reduce the risk of developing skin cancer. Only the visual impairments cannot always be fully contained, which can lead to an increased risk of accidents. Not everyone with albinism is therefore able to obtain a driver's license.

Excursus: albinism in the animal kingdom

Albinism is also widespread among animals: there are owls, kangaroos, gorillas and penguins, for example, which appear completely in white and thus differ significantly from their fellow species. Albino animals have too white feathers or fur, light skin and reddish eyesbecause their pigment cells have none or only produce too little melanin can - just like with sick people. Here, too, the genetic defects are inherited in a recessive manner, which means that both parents must carry the gene mutation in themselves so that bright animal children can be born. 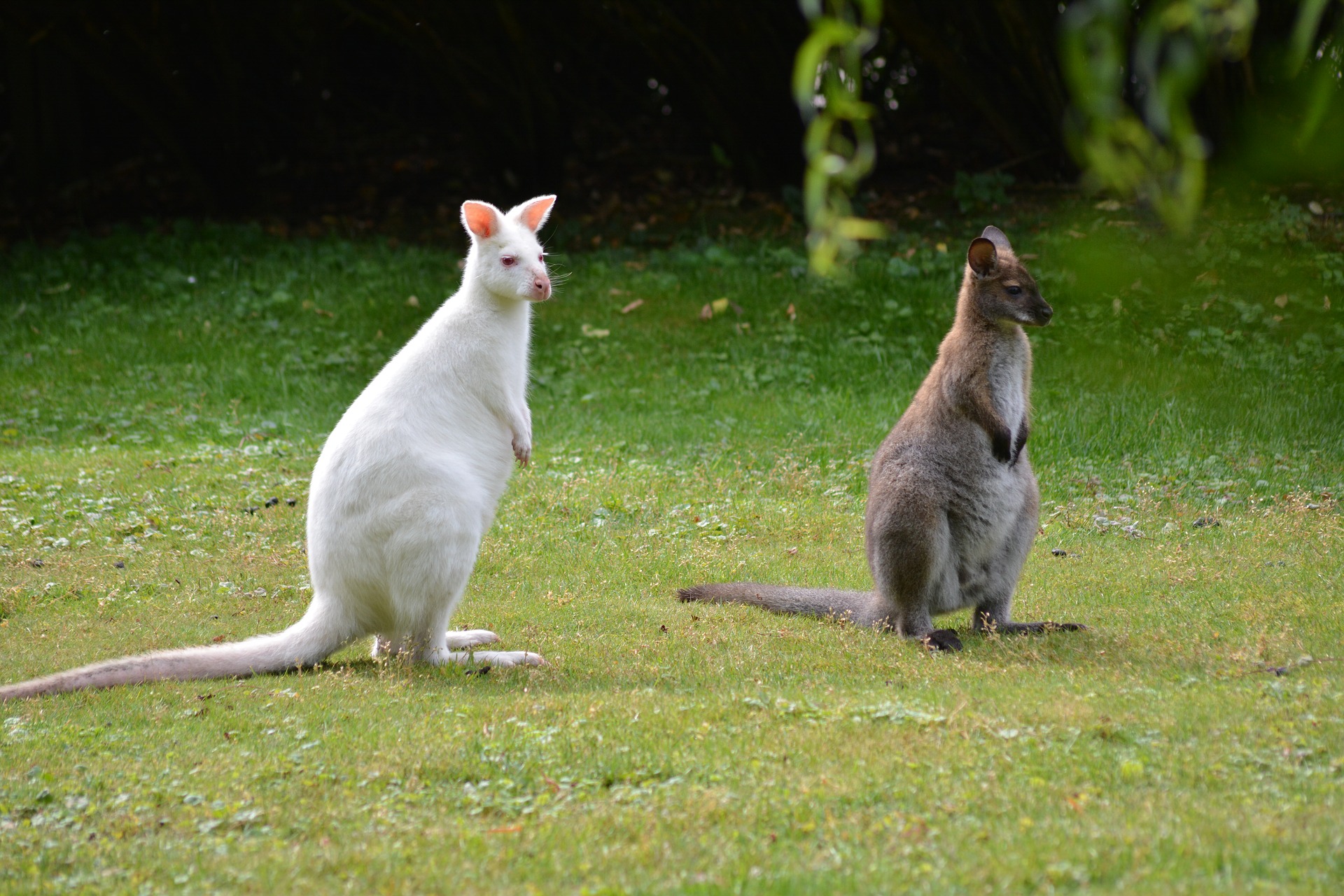 Albino animals are considered an attraction or even a lucky charm in many countries. Probably the most famous albino monkey was the white gorilla "Copito de Nieve" - ​​in English snowflake. For more than 35 years, visitors to Barcelona's zoo were able to marvel at him, until he finally had to be put down because of skin cancer in 2003.

In the USA there are also some cities that have made it their business to put the white squirrels that live there under special protection. For example, rodents have right of way on the road at all times; Those who try to smuggle such a squirrel out of town must expect hefty fines.

On the other side of the world map - in Thailand - white elephants are considered sacred. Only the king may own the light-colored pachyderms or give them away.

Summary: The Most Important Facts About Albinism

Definition: Several congenital metabolic diseases are referred to as albinism, which ensure that sick people suffer from a disruption in the formation of the pigment melanin. For this reason, the skin and hair are hardly pigmented. The eyes or vision are also restricted. A distinction is made between two forms: oculocutaneous albinism (hair, skin and eyes are affected) and ocular albinism (only the eyes are affected).

Symptoms: The symptoms of albinism depend on the type and severity. They can be different and do not have to occur in the same way in every person with the disease. Typical are the very light skin, the light blonde to whitish hair and the light, red-appearing eyes. In addition, many people with albinism suffer from visual impairment and other problems with their eyes. These include pronounced astigmatism, farsightedness or nearsightedness, uncontrollable eye tremors and / or sensitivity to light or diaphragm.

causes: Albinism results from a mutation in genes that are inherited recessively. That is, with albinism, the disease is inherited. The exact cause depends on the respective type or sub-type of the disease.

therapy: The cause of albinism is currently not treatable, so the disease is not curable either. First and foremost, those affected must ensure that their sensitive skin is adequately protected in order to avoid severe sunburn and, as a long-term consequence, skin cancer. As far as the impairment of eyesight is concerned, there are various options, such as wearing visual aids or surgical interventions.