Global swan song for US democracy

Asia: between solidarity and glee

In the China English-language daily newspaper "Global Times", which is under the direct control of the Chinese Communist Party, acts as the mouthpiece of the Chinese people. The headline is: "Chinese Internet Users ridicule the riots at the US Capitol as 'karma' and say that the bubbles of 'democracy and freedom' have burst. " 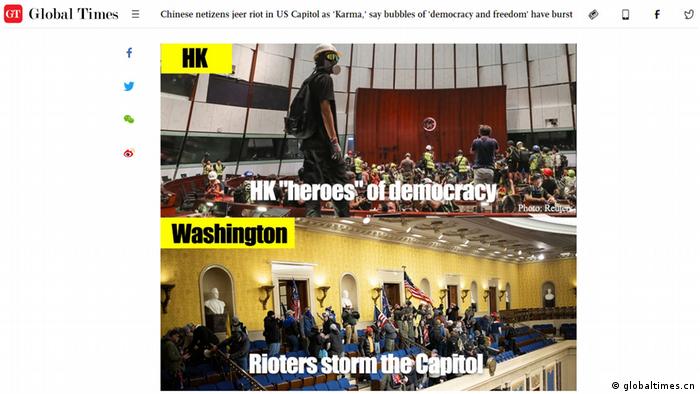 The article draws a parallel with Hong Kong: while in the USA the demonstrators in Hong Kong were praised as democratic, the events in Washington were considered "lawless" and unacceptable "insurrection". Nowhere was it mentioned that in the USA the election results, as recently in Georgia, are recognized and ultimately implemented, while there are no free elections in Hong Kong.

Narendra Modi, the Prime Minister India, expressed concern on Twitter and called for an orderly and peaceful transfer of power.

The media in Iran almost consistently pour ridicule and malice about their archenemy on their social media accounts. The US, which claims to bring democracy to the Middle East, should first defend its own democracy, it is said. "What we have seen in the US shows how weak Western democracy is," said Hassan Rouhani, Iran's President, on the sidelines of a cabinet meeting.

In the Middle East, politicians are largely reluctant to react. The former Tunisian Foreign Secretary Rafik Ben Abdessalem tweeted that Trump was acting just like his dictator friends in the region. The US was supposed to "bring democracy to the Middle East region but was hit by the curse of Al-Sisi and Bin Sayed".

The Palestinian politician Hanan Ashrawi compared Trump with a despot and lamented the "surrealistic scenes". "While the people of Palestine and many other parts of the world are fighting for democracy, there are those in the US who are actively sabotaging it," she wrote.

The egyptian MP and journalist Mustafa Bakri urged the US police to show restraint towards the demonstrators and sarcastically mimicked previous US condemnations of the autocratically ruled Egypt: "Where are the international human rights organizations?"

Many others in the Arab world also see parallels with their own countries. Saad Qais, a former Iraqi Soccer star, who now lives in Norway, wrote that Iraq could send troops to save American democracy. "This is how we pay the debt back to our friends," he joked.

Russia: swan song for the USA

When Trump supporters stormed the Capitol in Washington, it was Of Russia President Vladimir Putin at a religious service in a monastery on Orthodox Christmas Eve. A State Department spokeswoman said the events were an internal US affair. However, she pointed out that the US electoral system was "archaic", did not meet "modern democratic standards" and created "opportunities for numerous violations". 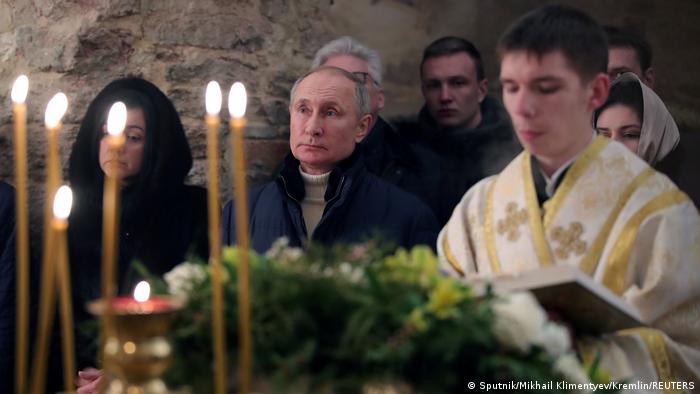 Putin during the Christmas service

Konstantin Kosachev, Chairman of the Foreign Affairs Committee in the Federation Council, the Russian Chamber of States, became clearer: "The celebration of democracy is over," he wrote on Facebook. "America is no longer a pioneer and has lost any right to set the direction, let alone to impose it on others."

In contrast to the majority of silent African heads of state and government, demanded Zimbabwe President Emmerson Mnangagwa put an end to the US sanctions Washington imposed over his country's democratic deficits. "The US has no moral right to punish another nation under the guise of promoting democracy."

Many Africans react with sarcasm on social media. "Trump should take off his mask and say which African country he comes from," wrote a Twitter user from Zambia.

In many cases, however, there is consternation. On DW-Kisuaheli Facebook page, user Hamad Said wrote of a "great shame for the American nation that calls itself the mother of democracy in the world". The former opposition leader in South African Parliament, Mmusi Maimane, said on Twitter: "As Africans we call on the US to respect democracy and the rule of law and to allow a peaceful transfer of power."

Almost at the same time and very similarly expressed themselves President of Chile Sebastian Piñera and the Colombian President Iván Duque on Twitter.

In Venezuela the reaction turned out to be far more smug. In an official communiqué, President Maduro's administration expressed its “concern” about the violence in Washington: "With this unfortunate incident, the United States is suffering the same thing that it has caused in other countries with its policies of aggression. Venezuela hopes the Violence will soon end and a new path to stability and social justice can finally be opened up for the American people. "

Brazil Right-wing President Jair Bolsonaro remains loyal to his ally Trump. "What was the problem that basically caused this whole crisis? Lack of confidence in the election," he told supporters in Brasília. Bolsonaro also warned that a similar chaos could also threaten the presidential election in Brazil next year. 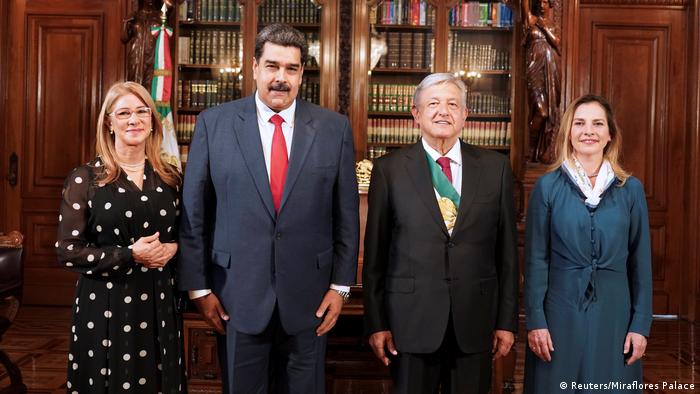 In Mexico neither President Andrés Manuel López Obrador nor his Foreign Minister Marcelo Ebrard commented on the events. However, the reports of the storming of the US parliamentary seat occupied a large area in the Mexican media. The statement of the former US President George W. Bush and its comparison with the situation in Washington as in a "banana republic" was quoted and ironically commented.