Will there be a Volkswagen Beetle in 2019

Off for the successor to the legendary Beetle

Volkswagen has been building the Beetle at its plant in Puebla since 1964. The group became a trailblazer for other German car manufacturers in Mexico. Today the Latin American country is one of the most important production locations for the German auto industry - and the Beetle, which has long shaped the cityscape of Mexico City, is an icon of this development.

"With almost 1.7 million units produced, Volkswagen Mexico was the exclusive production location for the Beetle successor New Beetle and the New Beetle Cabriolet for the world market for more than 20 years. While the plant in Puebla is planning a final special edition of this iconic model, concentrated the factory focuses on the production of SUV models, contributing to the global brand offensive in this segment, "said the spokeswoman for the Mexican VW division, Maria Del Consuelo Minutti Laso, of DW.

With the introduction of the Golf 8, the production of the VW Golf will also be withdrawn from Puebla and Zwickau and bundled in the main plant in Wolfsburg. Volkswagen is currently producing the Jetta, Golf, Golf Variant, Beetle, Beetle Cabrio and Tiguan models at its plant in Puebla, which employs almost 15,000 people and is the largest automobile factory in Mexico - primarily for the US market, where demand is primarily for SUV models has increased.

"Volkswagen Mexico has successfully integrated into VW's SUV offensive with the production of the Tiguan (long version) for the world market. This model has already produced more than 200,000 units," said Minutti. 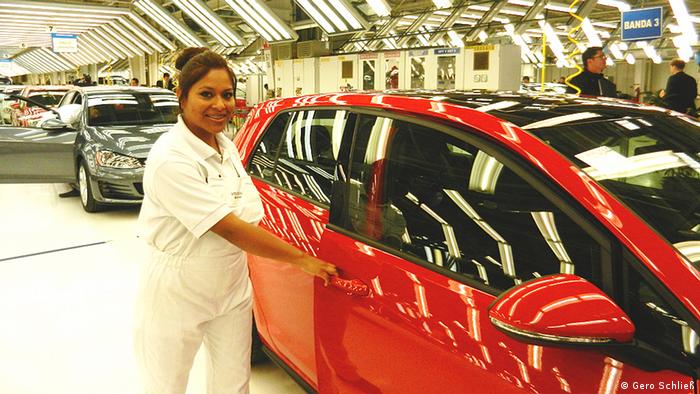 The VW plant in Puebla

The second generation of the Tiguan has been manufactured in Puebla since January 2016. VW invested a billion US dollars in the plant for this purpose. However, the sales figures fell recently and there was a related drop in production of eleven percent in the first eight months of this year compared to the same period last year.

As announced at the beginning of the week, VW will in future increasingly rely on the production of electric cars at German locations and its supplier plants in Braunschweig, Salzgitter and Kassel - combined with massive investments in this area, Minutti said. On the other hand, she did not say a word about the effects of the restructuring in production on the workers in Puebla, even when asked. Also from the independent VW union SITIAVW (Sindicato Independiente de Trabajadores de la Industria Automotriz Volkswagen de México) no statement has been received so far.

VW announced at the beginning of the month that it would not renew expiring contracts for 450 fixed-term workers. The downsizing is to take place gradually in accordance with SITIAVW. It is related to the aforementioned decline in sales and production. Other car manufacturers such as Nissan and Toyota are also struggling with sales problems.

In mid-August, VW and the union agreed on a 5.5 percent wage increase and a one-off payment of one percent in a savings fund with a simultaneous hiring freeze in the face of a strike threat from workers.

To what extent the restructuring has to do with the aggressive trade policy of US President Donald Trump, Minutti did not want to go into that. At the end of August, the USA and Mexico surprisingly came to an agreement in the dispute over the North American Free Trade Agreement (NAFTA). According to this, the value added from the NAFTA states in car production will be increased from the previous 62.5 percent to - as required by the USA - 75 percent. In addition, in the future 40 to 45 percent of every vehicle will be manufactured in factories where workers earn at least 16 US dollars an hour. In Mexico the hourly wage including social benefits has been eight US dollars so far, and for suppliers it is only four US dollars. It remains to be seen whether the workers at VW will ultimately benefit from the new NAFTA regulation and the restructuring of the production sites. But one thing is certain: "The loss of the 'Beetle' after three generations will arouse a lot of emotions among Beetle fans. There are no immediate plans to replace it," said Hinrich J. Woebcken, President and CEO of VW North America. However, according to the manager, you should never say never.