Sweden. 200 mountain peaks in Sweden have been re-measured - and some mountains have grown significantly afterwards. Eight made it over the 2000 meter mark. But at the top remains the same: Kebnekaise. SVT and P4 Jämtland reported on this. 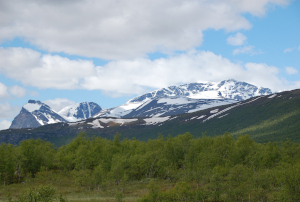 Kebnekaise and his neighbors

The survey was part of a complete re-mapping of Sweden with the help of a laser plane. A three-dimensional image is now created from the laser data. This should also make it easier to predict the risk of avalanches and floods. There were a few surprises at the mountain peaks. For example, Västra Bunnerstöten in Jämtland, previously recorded at 1545 meters, “grew” by ten meters, and its neighbor Tjallingklumpen (old: 1254 meters) by as much as 13 meters.

With such changes, things remained exciting at the top. The northern tip of Kebnekaise (2096.8 meters) and the Sarek summit Sarektjåkka (2089) are only eight meters apart. But these were already measured pretty precisely. Sweden now has a total of eight mountains with peaks over 2000 meters. Four of them are located in the Kebnekaisemassiv, next to the namesake also Kaskasatjåkkå (new 2071 m), Kaskasapakte (new 2040 m) and the seven meters “grown” Sielmmatjåkkå (new 2004 m). Three of them are in the Sarek area, in addition to Sarektjåkkå, Palkattjåkkå (new 2016 m) and Pårtetjåkkå (new 2007 m). Another is Akka (new 2011 m) at Stora Sjöfallet.

Former Swedish schoolchildren learned the height of Kebnekaise differently - more than 2100 meters. But there is no measurement error behind this. Until recently, Sweden's highest peak was the southern tip of Kebnekaise, Sydtoppen. This is covered by a glacier. The rock only reaches up to 2060 meters. But the glacier on the southern tip is melting like everyone else. In 2018 it was said for the first time that it had now sunk below the level of the rocky northern tip. This measurement may not have been accurate enough and in winter Sydtoppen got some snow on top again. In September 2019 the “change of throne” had certainly taken place: Sydtoppen was only 2095.6 high. The interplay could take place again. The region between Kiruna and the Norwegian border received extremely high levels of rainfall this winter.

This entry was posted in Geology, Sweden. Set a Bookmark the permalink.
<?