Similar to Germany is for one study graduation a US university one certain number of points (Credits) required. Students receive this through participation in courses and the grades accumulated in the course of their studies (Degree).

The grades of the individual subjects are related to the hours per week in the semester. While in the US the number of awarded Credits depends on the duration of the course (Contact Hours), the European credit transfer system ECTS is based on the workload of the students (Workload). Since every university in Germany has its own rating system, there is no uniform regulation for conversion and Eligibility of Credits.

However, it is considered Rule of thumb the conversion formula:
2 ECTS points = 1 US credit point

Alternatively, at some universities 2 US credit points Equated with 3 ECTS points.

grades in the US are not in the form of digits, but rather Letters forgive. Each letter corresponds to a certain percentage and is shown in the certificate (Transcript) written down. Some universities also use plus and minus signs to mark good and bad performance.

Grade point average in the US: the GPA 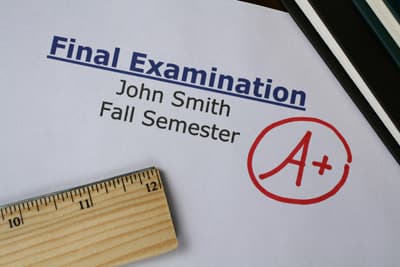 The US grading system is based on the letters A through F, with A being the best grade.

The GPA (Grade Point Average). It is the grade point average, which the American universities often determine after each semester, but at the latest at the end of the course.

The GPA is usually based on a Four point scale calculated. It provides information on the overall grade after graduation.

The grading system in the USA is not uniform and there is no generally applicable method for calculating the grade point average. However, the following overview from the US-UK Fulbright Commission shows the most common clefs in the USA:

To determine the GPA, the numerical values ​​of the grades for each course are added up, for example four points for an A, two points for a C. The resulting sum is divided by the total number of courses taken and ultimately results in the GPA.

Students usually reach Grades in the range of 80-100%. This is considered to be in the US grading system good performance.

The grading system in the USA and the types of exams

Since the study system in the United States is a lot more academic than in Germany, this also has an impact on the grading system in the United States. So A number of achievements are included in the final gradethat must be completed by the student during the semester. This includes homework, projects and one or more Term papers. In addition to Final Exam At the end of the semester, intermediate exams are common in almost every course, the so-called Midterm exams.

The Final Exam is usually less extensive than in Germany, as the students have to complete various academic achievements during the semester. In some courses, however, there is no exam at the end of the year. Instead, the teachers assign homework every day and write regularly Testing (quiz).

Notes for international students on the US grading system

Students in Germany normally acquire 30 ECTS points in one semester. This guideline usually also applies to a semester abroad in the USA. The Minimum number of 12 Credits, which full-time undergraduate students in the USA must achieve, corresponds to only 24 ECTS points according to the current conversion formula. Thus the required number of ECTS points per semester not achieved. For this reason, many students take one on site additional course. This brings you to 16 Credit Hours, which in turn corresponds to the equivalent of 32 ECTS points.

Important: Before starting their stay abroad, students should Consultation with the home university on the recognition of study achievements abroad as well as the exact conversion of the acquired Credits keep in ECTS points. This is the only way to meet the requirements for a smooth recognition process.