Total population in Germany in 2020

According to the Federal Statistical Office, there were around 83.2 million people in the Federal Republic of Germany at the end of 2020 - 42.14 million women and 41.05 million men.

For the first time since 2011, the population does not increase in 2020

In the first half of 2020, the population decreased by around 40,000 people (minus 0.05 percent). This is the first decrease in the number of inhabitants in Germany since 2010. At that time there was a decrease of 0.1 percent in the second half of the year.

Between 2011 and 2019, the population in the Federal Republic rose steadily. In 2015 in particular, there was a sharp increase of around 717,000 inhabitants (around 0.9 percent) due to the increased immigration. In the years that followed, population growth slowed, but continued to rise due to immigration. The corona pandemic made immigration more difficult in 2020, which is why Germany's population has not increased for the first time since 2011.

A country's population size is influenced by three basic demographic factors. The number of births and deaths as well as the net migration are considered. The migration balance describes the difference between immigration and emigration.

The population data from the Federal Statistical Office show that the death rate in Germany has been higher than the birth rate since 1973. Since 1973, more people have died than children are born in Germany every year. Without net immigration, the number of inhabitants would have been falling steadily for over 45 years due to the birth deficit in Germany.

It can be assumed that the death rate in Germany will continue to be higher than the birth rate. This is due to the fact that the baby boom generation with high birth rates is getting older, while the lower birth age groups of the 1990s are entering the phase of starting a family.

The population of Germany by age group

The age structure of the population in Germany also shows that the Federal Republic is in the midst of demographic change. While the number of young people is falling, the number of older people continues to rise. It can be assumed that every second inhabitant in Germany is older than 45 years. Every fifth inhabitant is even older than 66 years.

This shift in the demographic framework is also due to the strong “baby boomer” cohorts of the 1950s and 1960s and the weaker cohorts that followed. The “baby boomers” still make up the largest population group in Germany, which is why they make a significant contribution to demographic change with increasing age.

The expected development of the population in Germany by 2060

How will the population in Germany develop in the long term? The Federal Statistical Office presents three possible trends in population development between 2020 and 2060 in Germany: 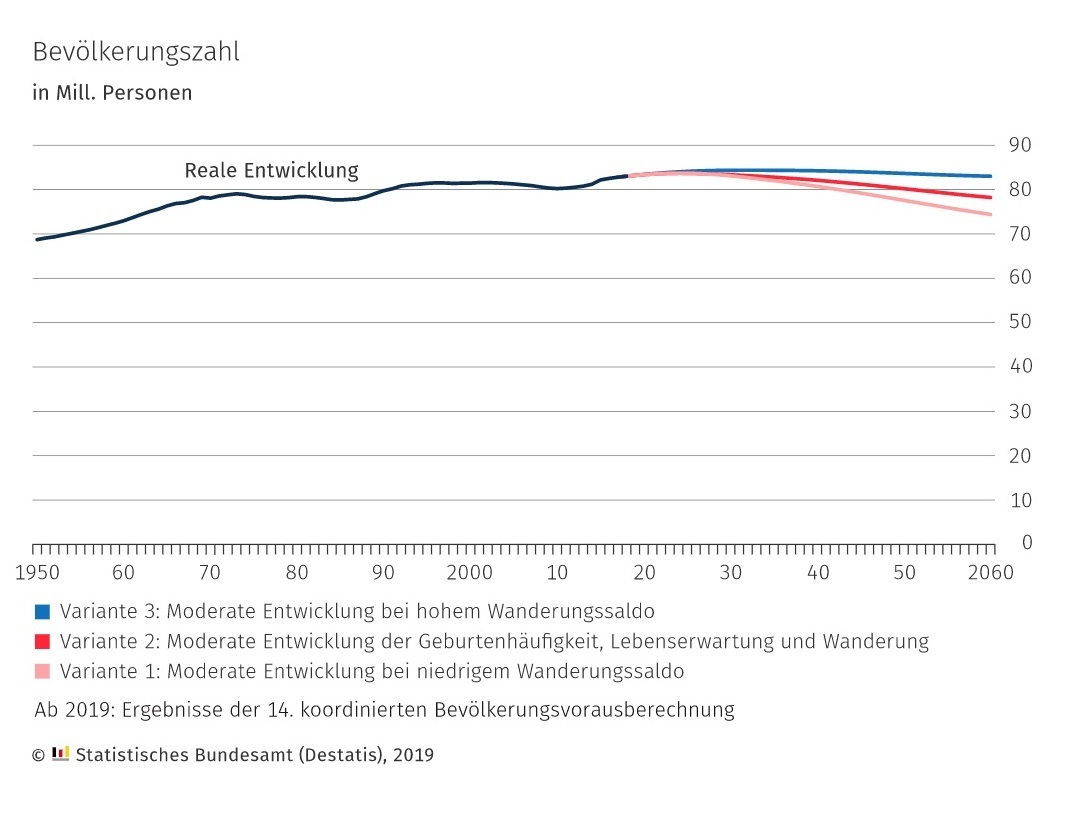 The first possibility (variant 1) shows a moderate development of births and life expectancy with low net immigration for the forecast of the population. With this variant, the number of inhabitants in Germany would decrease by around eight million inhabitants by 2060, to a level of around 74.4 million.

The second variant shows a moderate development in the birth rate, net immigration and life expectancy. This would lead to a slight decrease in the population to just under 78.2 million people by 2060.

As a last option, the Federal Statistical Office indicates a moderate population development in terms of births and life expectancy with high net immigration. This would initially lead to a slight increase in the population. However, the increase would be put into perspective by 2060, so that the number of inhabitants in Germany would then be 83 million.

The population figures in the sixteen federal states in Germany:

The federal states with the highest population figures in Germany are North Rhine-Westphalia, Bavaria and Baden-Württemberg. In North Rhine-Westphalia in particular, the population density is high due to the metropolitan areas around the Rhine and Ruhr. Around 17.9 million people lived here in 2019. In a nationwide comparison, Berlin is located in the middle. About 3.67 million people lived here in 2019. Bremen has the smallest population in Germany, with around 681,202 inhabitants.

These are the most populous large cities in Germany

In Germany, too, more and more residents are moving to the big cities. There are many reasons for urbanization. Whether greater educational opportunities, improved career opportunities or more mobility - Germany's large cities are attractive.

With Berlin, Hamburg, Munich and Cologne there are four megacities in Germany. Frankfurt follows in fifth place with 763,380 inhabitants. But Essen also makes it to the ten most populous cities in Germany.

The most populous cities in Germany in the table