Can you cure cancer 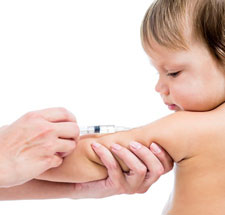 The new weapon against cancer is based on vaccine viruses, which children are usually used to vaccinate against measles. Whether flu, herpes or measles viruses - viruses are actually our enemies. But they could become helpers in cancer therapy in the future. Because viruses are able to specifically infect and destroy cancer cells. Scientists speak of oncolysis. The trick: the viruses are modified in such a way that they target cancer cells. Once in the cancer cells, they multiply almost unchecked. In the end, the infected tumor cells burst and release masses of newly formed viruses in the tumor. "Here we are dealing with a unique therapeutic reinforcement mechanism or domino effect," says Professor Dr. Christian Buchholz from the Paul Ehrlich Institute in Langen. What is special: "Oncolysis also works when the cancer cells no longer respond to any of the conventional treatment options such as chemotherapeutic agents, radiation or antibodies," says Professor Dr. Ulrich Lauer from the University Hospital Tübingen. With the support of the Federal Ministry of Education and Research (BMBF), the two scientists generated optimized oncolytic measles vaccine viruses and examined them in detail in a pre-clinical setting.

The basis for the new oncolytic viruses were vaccination viruses, with which two-year-old children are usually vaccinated against measles. "In order to strengthen the effect of the viruses against cancer cells, we have modified them," says Lauer. “First of all, we also armed them.” This means that an additional gene, a so-called suicide gene, was built into the viruses. This gene forces the infected cancer cells to “biochemically” suicide and thus additionally intensifies the directly virus-mediated oncolysis. A major challenge in virotherapy is to rebuild the viruses in such a way that they only target and destroy cancer cells, more precisely cancer stem cells, and not healthy body cells.

As a rule, tumors do not consist of a uniform cell population in which all cells respond equally sensitively to different therapies. Rather, it is believed that many types of tumors contain cancer stem cells. These usually respond poorly to chemotherapy and radiation therapy and are held responsible for the development of metastases. The cell surface protein CD133 is currently being discussed as a characteristic marker of these cancer stem cells. “We modified our virus to target cancer stem cells in such a way that it requires the surface protein CD133 as a receptor to penetrate the cell,” explains Buchholz. The researchers were able to prove that the modified virus in cell mixtures actually only infected cells with the surface protein CD133. In collaboration with researchers from the German Cancer Research Center and the National Center for Tumor Diseases in Heidelberg, they then examined the anti-tumor effects of the new virus in mouse models for glioma, colon cancer and liver cancer. The result: By administering the targeted virus, tumor growth was significantly reduced, and in some cases even completely suppressed. 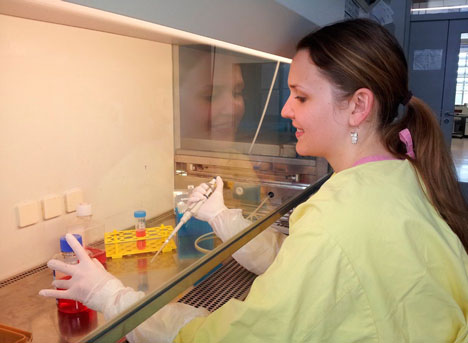 How safe are the modified measles vaccine viruses?

Does the attack on CD133-positive cells really only destroy cancer cells? Because not only cancer stem cells carry the surface marker CD133, but also blood cell-forming, haematopoietic stem cells. “Nevertheless, they were not attacked by the oncolytic measles viruses,” Lauer describes the results. According to the experts, the reason for this is the innate immunity of these cells, which protects them from attack by measles vaccine viruses. In many tumor cell types this immunity is defective, so that the viruses can reproduce in them unhindered. "Based on our current level of knowledge, we assume that the modified viruses are just as safe as the vaccination against measles viruses that has been used successfully for decades," says Buchholz. 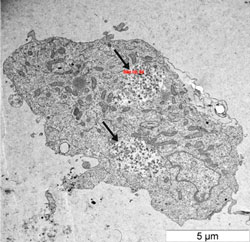 Electron microscope image of cancer cells infected and destroyed by the virotherapeutic agent. Already 24 hours after administration of the measles vaccine virus, areas (marked with arrows) can be found in the cancer cells in which massive amounts of new virus particles are formed. Lauer is now planning the effectiveness and safety of the oncolytic measles vaccine viruses in clinical studies, initially in patients to check with liver tumors. Other virotherapies are already being clinically tested and are showing promising results. One of these clinical studies is already being carried out at the Tübingen University Hospital. Since April 2012, Lauer has been treating patients suffering from inoperable peritoneal cancer with genetically modified smallpox vaccine viruses. The viruses are administered directly into the abdominal cavity via a catheter. "This is how we want to ensure that the viruses get to the tumor as quickly as possible," says Lauer. If the immune system recognizes the viruses as intruders before they infect the tumor cells, the therapy cannot have the desired effect. Buchholz: “Virotherapy is still in its infancy. The results of the studies will show whether it can meet our expectations. "