Is Kazakhstan better than India

India - the next giant in Central Asia?

Diverse cultures, political territories and areas of cultural influence come together in Central Asia. Today the region is mainly perceived as a Russian sanctuary or a stepping stone for the new Chinese Silk Road. But there is another country with historical connections that is discreetly positioned there: India.

A quick glance at the common religious culture confirms that the Indian subcontinent has always been in close contact with Central Asia: Buddhism, originally an Indian religious movement, is widespread in Central Asia. In the past there were many influential religious schools here.

From Buddhism to Islam
When the Chinese pilgrim monk Xuanzang set out in the 7th century to study the first texts of Buddhism, he came to India via Samarkand and various monasteries in what is now Kyrgyzstan and Uzbekistan. He contributed significantly to the spread of Buddhism in China. His journey became the basis for the classic Chinese novel "Journey to the West". 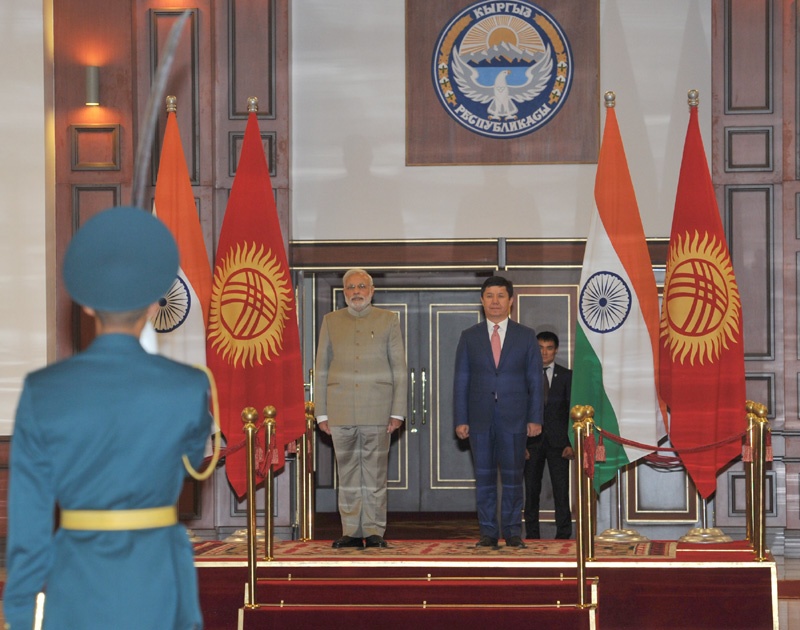 Islam has developed complementarily in both regions: the Delhi Sultanate, India's first Muslim kingdom, was founded by a converted Mamluk. The founding father of the Mughal dynasty (16th to 19th centuries) was Babur, a Timurian heir, who founded his empire from the capital Samarkand. Finally, the Sufi order Naqschbandīya had great success in the Indian part of the Mughal Empire, as many important personalities were among its followers, such as the Mughal Mughal Aurangzeb.

Even today, Muslim currents from South Asia have a certain influence in Central Asia. The political scientist Bayram Balci dedicates a separate chapter to this largely unknown topic in his book on Islam in Central Asia and the Caucasus since the collapse of the Soviet Union. The fact that the Tablighi Jamaat or Ahmadiyya movements originally come from India, but are primarily anchored in Kyrgyzstan, plays an important role in the renewal of Islam in the former Soviet regions.

The border between the two worlds is fluid and is located in Afghanistan, which is typically sometimes assigned to South Asia (the Indian subcontinent), sometimes to Central Asia. Communities of both regions live there: South Asians, such as Pashtuns or Baluch, alongside Central Asians such as Tajiks, Turkmen and Kyrgyz people. Afghanistan is a bridge between the worlds: India's connection with Central Asia runs through Kabul.

Current projects
One of the flagship projects that will allow the regions to grow closer together is the TAP (Turkmenistan-Afghanistan-Pakistan Pipeline), the name of which says it all, because it will connect Turkmenistan to India via Afghanistan and Pakistan. It will deliver Turkmen natural gas from the Galkynysch gas field to the Indian city of Fazilka in the state of Punjab on the Indian-Pakistani border. Construction of the pipeline began in 2015 and is scheduled to be completed by 2019.

Another ambitious plan was presented by India in 2014: The North-South Transport Corridor (INSTC), the aim of which is to promote the construction of transport routes in South and Central Asia, the Caucasus and Russia. While the original intention to connect Bombay and Moscow via Iran and Azerbaijan excluded Central Asia, the project has now evolved: India wants to use the rail network between Kazakhstan, Turkmenistan and Iran to quickly expand its influence. 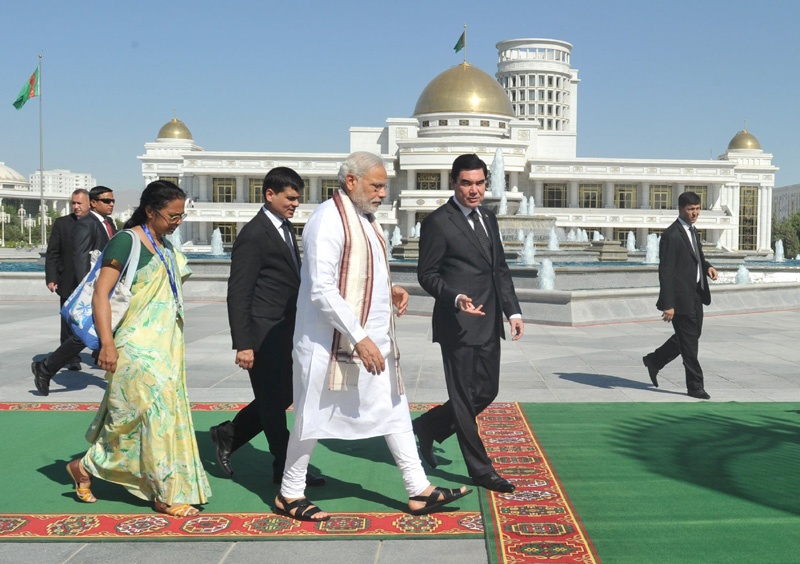 Funds from New Delhi are also flowing into the expansion of the port of Tschahbahar on the Gulf of Oman in Iran in order to establish a route between the Afghan iron ore mine of Hajigak and the Persian Gulf (with a connection to India). In the longer term, it is mainly goods or energy from Central Asia that will reach the Persian Gulf via Iran and the port of Tschahbahar. The north-south transport corridor thus also enables the exchange between Central Asia and India.

New Delhi is thus getting closer to the partner countries of the Ashgabat Agreement (Turkmenistan, Kazakhstan, Uzbekistan, Iran and Oman), the aim of which is to promote the transport of goods between Central Asia and the Persian Gulf. Pakistan also agreed to the contract in 2016 and India is very interested in participating in order to strengthen its already existing projects in the region. It is primarily these transport projects for goods and energy with which India is very actively involved in Central Asia.

Military presence in Tajikistan
India is also present in Central Asia through the military base in Farchor, Tajikistan. Due to its proximity to the Afghan border, its strategic goal is to encircle Pakistan, but also to control activities in Afghanistan and reduce the terrorist threat. 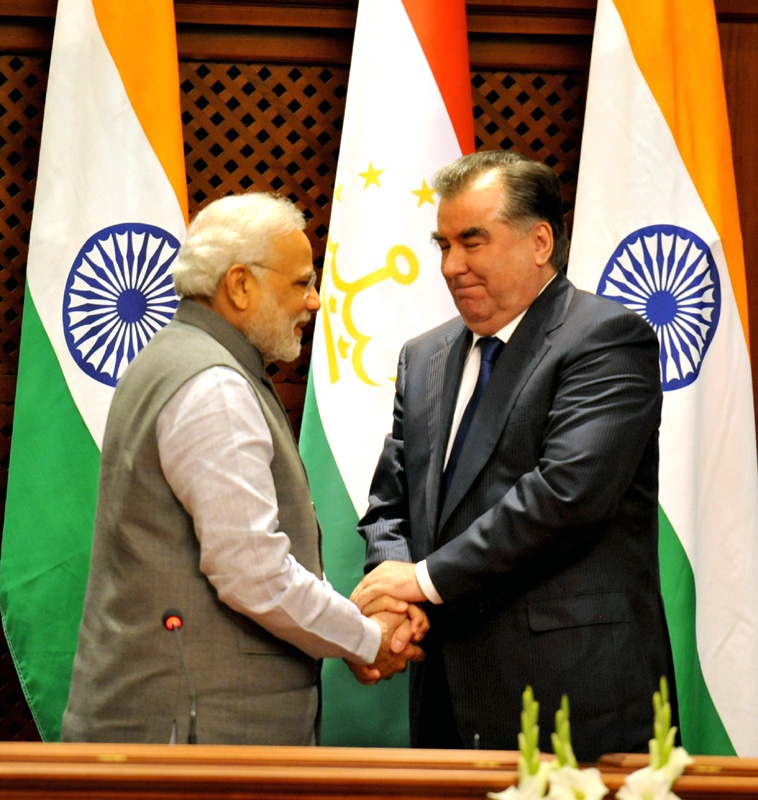 At the same time, the Tajik minority in Afghanistan has always had close ties with Tajikistan. It was also this minority that led the resistance movement against the Taliban in the 1990s, and this is where the well-founded interest stems from to move closer to this minority and thus also to Tajikistan for the benefit of regional security.

The renewal of the Tajik military base in Ayni, which made the expansion of the Indian army possible, was also supported by India. In addition to economic relations, India is also working with Tajikistan - and in the long term perhaps with other Central Asian countries as well - on a military strategy.

Geopolitics and interests
India's rapprochement with Central Asia is the product of two major geopolitical interests: encircling rival Pakistan and competing with the Chinese project to rebuild the Silk Road.

Since the attacks of September 11, 2001, Pakistan has been playing a double game in Afghanistan, the aim of which is to keep Kabul in Pakistan's sphere of influence and to prevent rapprochement with India. New Delhi has a keen interest in building ties with Afghanistan in order to eliminate its longstanding rival. All projects that want to achieve to connect Afghanistan with Central Asia and Iran and bypass Pakistan in the process represent an opportunity to free the war-torn country from its isolation and to avert the influences from Islamabad. 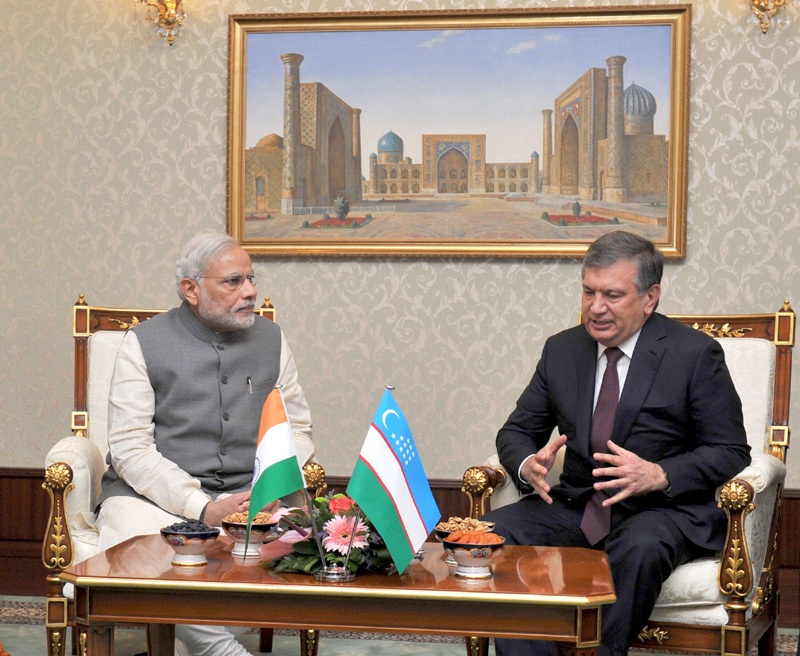 The development of the port of Tschahbahar is also a means of bypassing Pakistan. As good as the relationships are, projects like TAP are just as interesting for both countries. However, should tension or even conflict arise, there is a risk that Islamabad will deny India access to Turkmen gas. Connecting Central Asia and Afghanistan to the outside world via the port of Tschahbahar is one way of giving India access to these resources without having to cross Pakistan.

These strategies are also a means of playing off the Indian influence in Central Asia against the Chinese. The North-South Transport Corridor is thus becoming an Indian version of a new Silk Road that tries to avert Chinese domination in the region.

Read also on Novastan: The New Silk Road: A State of Affairs

Meanwhile, Beijing is planning its own port in the Indian Ocean, in Gwadar, Pakistan, to give Central Asia access to the sea. All these projects have in common that they transport energy resources and promote trade. Although the Indian projects seem to be less successful than the New Silk Road at the moment, New Delhi could be a serious competitor to China in the long run. In any case, India is already a rising power in Central Asia.

Translated from the French by Elisabeth Rudolph

You can find even more Central Asia on our social media channels, take a look at Twitter, Facebook, Telegram, Linkedin or Instagram. For Central Asia directly in your mailbox you can also register for our weekly newsletter.