Deadlines are enemies of creativity

Back to the front page

Since I dealt with the topic of creativity in writing some time ago, I am taking - slightly modified and supplemented - these two chapters from the songbook "Barefoot over the Earth": "Thoughts on being creative" and "Infected" .

I would like to encourage you to follow your own "creative source"to research. Often highly sensitive people are multi-talented, but still have the feeling that they cannot" do anything right ". Or they are not even aware that they have ingenuity or creativity and that they - through a conscious deepening of this" source " - could experience an enrichment and vitalization in their life.

Sometimes it is enough to even ask the question of your own creativity, to do some research, to "open the door", so to speak, only to suddenly discover that an interest is awakened, a new idea "falls" - or the desire for a new activity becomes noticeable. I have often seen this "opening of the inner door" in my life as groundbreaking. However, if you wait in vain for such "inspirations", there are now many courses for creative activities of all kinds, from art forms to computer courses to very special "hobbies", and you can search in the jungle of offers.


Thoughts on being creative

To be human also means to be creative. I believe that we all have an often-buried, creative source that searches for its expression for a lifetime: man is by nature a creative being! Often this creative power is apparently lost on the path of life, is suppressed, forgotten or pushed into the background. Finding this source again can be a way to a new, deeper vitality.

We often automatically combine creativity with artistic activities: painting, writing, dance, composition, working with stone, clay, wood, glass ...
However, creativity can manifest itself in an infinite number of forms. Whether you discover your "source" in the garden, on the computer, in the kitchen, while playing or doing your daily work - you will immediately feel whether you are connected to it or not: being creative always fills you from head to toe , has nothing to do with everyday hitchhiking, but often with hard work. It brings body, mind and soul to life and arouses questions, feelings of enthusiasm and doubts. Over time you begin to feel that your creativity is no longer limited to a certain topic, but is slowly becoming a basic attitude in your life.

Creativity is often associated with talent. Above all, talent plays a role in the artistic field or can (does not have to) point the way if we want to be creative. Creativity - Creativity, on the other hand, is a primal force of life, sometimes even of survival. It also has to do with awareness and practice. "Practice makes perfect", because "masters seldom fall from the sky"! Often in the course of our lives we have downright weaned ourselves from being creative and may be clumsy at first, need time and perseverance to awaken a buried talent or a new area of ​​interest to life.

We have to be aware that ideas that we have of ourselves (e.g. "I'm not a creative person ...") can often get in our way and inhibit us. "Pre-positions" are - as the word already expresses it - things that we what is really there, and which often have nothing to do with reality.
It is especially important to let go of the idea of ​​having to be perfect. Perfectionism, which is widespread today, is one of the greatest enemies of creativity.

I would be interested to know how other songwriters got into writing songs. As for me: I got infected. At a concert by the Schaffhausen songwriter Dieter Wiesmann, I probably sat a little too close to the edge of the stage - and so I was attacked by the incurable songwriting virus. Before that, I would never have thought of writing my own songs. That was probably because I grew up listening to Mozart, Beethoven and many other classics. In such illustrious company, who comes up with the idea of ​​composing a song?
Of course, I later came across other, less illustrious songs. At the Girl Scouts, for example, we sang happily:

"We were off Madagascar
and had the plague on board - ahoy!
In the barrels the water rotted
and every day someone went overboard - ahoy ....... "

Nevertheless: songs remained "sacred cows" for me. It just existed. They were in song books and we learned them - that's that.
I think that many people feel the same way and that this attitude means that a lot of creative potential lies idle.

When I finally discovered my "song source", songwriting became like an addiction for me at the beginning. From now on I always had to have note paper and pencil with me, because the song ideas overwhelmed me every day. My family often waited in vain for lunch: I sat in my room and wrote poetry.

Over time, I noticed certain regularities in the process from the idea to the song:
1. The idea strikes me - the sparkling thought - a euphoric feeling!
2. At some point - mostly when the song is in the shell - there will be a crash. ("This is once again the last thing I did there ...")
3. After a while, confidence in the newly created song comes back, and the detailed work follows: filing and reshaping until the song is "right".

Every frame of mind, every joy, every anger - everything that I encountered was immediately in danger of being set to music by me. I sang about my daughter who wanted a pony, my son's puberty, my geese behind the house, my anger because someone had yelled at me ... Once I received a card from Dieter Wiesmann from military service: He didn't have much at the moment to do and therefore wrote fairy tales. A reason for me to immediately drop everything and write a song in which the soldiers no longer have time for wars because they are busy writing fairy tales ...

I learned something very important during this time: creativity cannot use half measures. It demands all of my presence. It gives me the focus on the present, intense moment, and it teaches me again and again - regardless of the opinion of others - to go my way and to stand by myself.

And I found out something else: songs are not "sacred cows" that eke out their existence in song books! Songs have to be made first - by people like you and me. 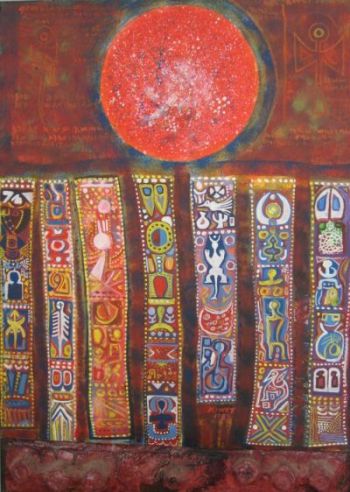