How corrupt was the South Vietnamese government

VICTIMS OF THE VIETNAM WAR 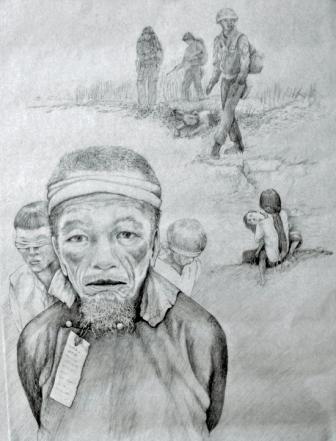 It is carefully estimated that 1.5 million Vietnamese were killed in the Vietnam War. Vietnam released figures on April 3, 1995, according to which a total of one million Vietnamese fighters and four million civilians on both sides were killed in the war. The numbers are contradicting itself. However, they give an idea of ​​the extent of the horror. South Vietnam lost around 250,000 soldiers.

After the war, the rigorous measures taken by the communist victors, including prison camps and re-education, resulted in the deaths of an estimated 1.4 million South Vietnamese, mostly of Chinese descent.

The United States recorded 270,000 enemy contact and 58,193 casualties. Almost 45,000 of them were not older than 25, almost a third of them were only 20 years old. The Americans lost over 60,000 other former soldiers to traumatic suicides as a result of long-term effects. Over 40,000 veterans became addicted to heroin during their service, 330,000 became unemployed on the one hand because of demobilization and on the other because of the political situation and the psychological consequences. In 1972 over 300,000 veterans were incarcerated because they had committed criminal offenses for the reasons mentioned and had failed to find their way back into civilian life.

The Vietnam War was the second and particularly costly stage in a thirty-year armed conflict that began in 1946 with the resistance of the Vietnamese Communists and other groups against the French colonial power.

Vietnam has been under French colonial rule since the 19th century. In 1940 it was also occupied by the Japanese. After the French were driven out by the Japanese and Japan surrendered in the summer of 1945, the communist Viet Minh under Ho Chi Minh proclaimed the Democratic Republic of Vietnam. However, France claimed the re-establishment of its colonial rule. Ho Chi Minh then concluded an agreement with France in 1946 in which France recognized Vietnam as a "free state" and which provided for the temporary stationing of French troops in Tongking. While Ho Chi Minh was negotiating in Paris, French planes bombed the Vietnamese port city of Hai Phong on November 23, 1946, killing 6,000 civilians. Ho Chi Minh's last attempts to end the fighting were sabotaged by the French colonial administration. With that the first Indochina War had begun.

Since the USA saw their own interests (politically and economically) threatened in Indochina, they financed the first Indochina war of the French to more than 80%. The US gradually intensified its military aid and at times even considered the use of nuclear weapons. In 1954 the French suffered a devastating defeat in Dien Bien Phu in which almost all soldiers on the spot either fell or were taken prisoner (2,300 dead, 5,200 wounded, 11,800 prisoners). France then gave up its claims in Asia. At the Indochina Conference in Geneva, it was agreed to physically separate the two parties from one another.

The US has supported (the new) South Vietnam from the start through military advisers and equipment. Their goal, guided by domino theory, was not to leave any country to communism. They also tolerated that the newly formed South Vietnamese government was visibly corrupt and had opponents of the regime arrested and killed. 1959 saw the first major armed clashes between left-wing guerrillas and government troops.

In August 1964, on the 2nd and 4th of the month, the so-called Tonkin incident occurred (military conflict between American destroyers and North Vietnamese speedboats in the Gulf of Tonkin, albeit without serious consequences). It is now known that the Tonkin Crisis was caused by American provocation by the military and the National Security Agency (NSA) and that the NSA's August 4th report to President Johnson was forged. On August 5, by order of the President, air strikes were carried out on North Vietnamese naval bases. On August 7th, after media preparation by the government, the Congress passed a resolution in which the government was given complete freedom for all conceivable actions.

As a result, there was a massive American military presence in South Vietnam and excessive use of material. In total, the United States fired 15 million tons of explosives, twice as much as in World War II and five times as much as in Korea. This led to immeasurable suffering for the civilian population, on the one hand because the effects of the large weapons mostly reached civilians, on the other hand because the (young) American soldiers had no knowledge of the Vietnamese culture and language and, moreover, it was often not possible to strike between friend and foe distinguish.

The widespread use of defoliants, such as Agent Orange, led to long-term contamination of the vegetation and the population, be it through direct ingestion of the toxins or indirectly through the food chain. As a result, there was and is an increase in cancer diseases, deformities in newborns and other damage. In 2007, one million adults and 150,000 children were still affected by diseases and deformities that can be traced back to them. Since the dioxins change the genetic make-up, many generations will still suffer.

The Vietnam War was waged with inhuman cruelty on both sides. The My Lai massacre, where a US Army unit attacked the South Vietnamese village, has become known. In just a few hours, over 500 civilians of both sexes and of all ages were murdered, numerous residents were raped and the village was then burned down. The person responsible at the time was only sentenced to life imprisonment in the USA in 1971; however, the sentence was reduced to 20 years. After three years in prison, he was placed under "house arrest" on orders from President Nixon and pardoned that same year as a result of public pressure.

However, My Lei was not an isolated incident. Villages and Vietnamese suspected of supporting the Viet Cong were often victims of cruel American and South Vietnamese war crimes, a practice also used by the Viet Cong.