What are the crimes of Prophet Muhammad

Feud between Muslims and "prophets": hatred of Islam

A self-proclaimed prophet warns of the "crimes of Muhammad" in his book. A Muslim fiercely fights the work. Now both fear for their lives. 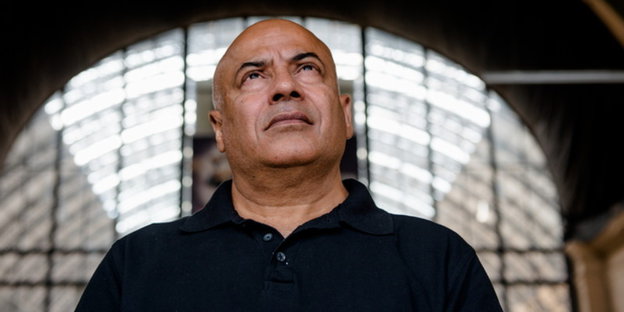 Zahid Khan sits restlessly in a café at Frankfurt Central Station. There is a tense vigilance on his face. He constantly looks nervously to the left and right, there are death threats against him on the Internet. Islam is a root of terrorism and extremism, says the short, compact, bald man who looks like a good employee. "Through me as a prophet, the prophet Mohammed was given the opportunity to confess what went wrong in Islam and in his own life," says the 55-year-old, and: "In Islam, the height of Satan's work is manifested."

That is the issue that worries the Pakistani. He is concerned with Islam in general and Mohammed in particular, who has a mission - namely to protect Germany and the whole world from Allah. God personally asked him to do so in a dream. “One of my main tasks is to reform Islam,” he says. That's why he self-published a book in 2009. Title: "The Crimes of the Prophet Mohammed".

Islam wants to subjugate everything and everyone, that is Khan's message.

The Muslim Stefan Sali Nagi says that he met the prophet Mohammed in a dream. For him, Khan comes from the heart of darkness. He is an enemy to be fought. That's why Nagi organizes demonstrations, burns and spat on Khan's book. These scenes can be found on YouTube. He went to court - wanted to ban the "Devil's Book". Nagi calls Khan's theses "confused and insane" and demands: "Islam-haters should go to prison."

Critics want to subjugate Islam, that is Nagi's message.

Zahid Khan speaks disorderly, mixes German with English, answers questions only briefly, in order to quickly get back on his mission against Allah. Then he raises his eyebrows and shoulders, his short neck is barely visible. He repeats his statements again and again that Mohammed is a dictator and Islam is the root of terrorism.

He grew up in Lahore, Pakistan, and his family were Sufis. Sufis are regarded as the mystics in Islam who are seen by Islamists as a danger because of their declared love of peace and religious tolerance. They are a persecuted minority in Pakistan who still suffer from repression to this day. Because his family ran out of money, Khan had to leave school after the 5th grade. This was also the time of his first nightly encounters with angels who "took me into the light", as he says.

Religious prophet with a mission

Wasn't that a simple dream that kept coming back? “You experience dreams in your sleep,” he replies. “But I was always fully conscious.” As a 16-year-old, he then met God. Since that day he has not been a Muslim, he says. But a religionless prophet who proselytized against Islam. He arrived in Germany in 1974 via detours. In 1986 he returned to Lahore for a university lecture in which he criticized the Koran. Because of that, he was detained and tortured there for a few days, he says. He now lives as a real estate agent in the Hessian province, is married and has six children.

When nobody wanted to publish his first book, he self-published it in 2000. Since then he has published his own works, with titles such as “Prophet Muhammad's Message to Islamic Extremists” and “True Moments with God”. How much he earns with it, how high the editions are, he doesn't want to say. Then three years ago the publication of “The Crimes of the Prophet Mohammed”. There are 373 pages full of statements like that Jesus asked him to write about Barack Obama. Khan compiles, fables, writes strange stuff. Can he understand that he could be thought of as crazy? “Yes, but I know I met God,” he says. It's the only time he smiles.

Where does the hatred of the faith come from, Mr. Khan? “I don't hate anyone,” he replies. "I'm not angry, I'm a prophet."

His adversary Nagi was born in Frankfurt as the son of a German and a Pakistani. Although he was brought up as a Muslim, it was not until he was studying medicine that he began to live strictly according to Islamic rules. “I was looking for a content for myself and got stuck with Islam,” he says, who counts himself to the Sunnis. Sunni theology sticks to the unquestionable example of Muhammad and the Koran.

The inconspicuous, slim 39-year-old needs many words for three messages. First: There is only one true religion. Second: "I want all books with this bad content and insults against our prophet to be banned." Third: Germany treats its Muslims badly - and he has to change that.

Since his wife died a year ago, he has stepped up his defense of his faith even further. He wrote many letters and emails in the past few months. He wants to obtain a boycott of German goods abroad. He would have liked to see more Muslims in his demos against Khan. But only a few dozen came at a time. That leaves him only with the Internet and the judiciary. In his videos he often wears white, ironed shirts, his hair is carefully combed back, and the white shutters are usually pulled down behind him. He looks very upright, the way he gets so upset.

Where does this anger at religious critics come from, Mr. Nagi? "Khan puts Islam in a criminal corner and insults our prophet in many ways," he replies. But do you have to take it seriously? “Khan says the Koran and Islam are not holy. No Muslim can accept these shameful claims. "

These two thought systems from Kahn and Nagi, they don't sound logical. Not rational. To say the two adversaries are strange would be a colossal understatement. Your explanations are bizarre. But also say something about the phenomenon of religious critics and zealots. Who lose any degree of diplomacy and, in this case, their sense of reality. There are no doubts, just your own truths and fanatical barks. They handle references to Hitler and Osama bin Laden and rhyme up doom scenarios: The government is looking the other way. The authorities would sleep. Society is being infiltrated.

On June 26, Khan and Nagi met in court. The self-appointed protector of the prophet had sued the self-appointed prophet. The judges of the Darmstadt Regional Court rejected a ban on Khan's book. According to the grounds of the judgment, the plaintiff was not directly violated in his personal rights. It was Nagi's second loss that day.

Because there were only about twenty demonstrators standing in front of the courthouse, holding up posters with sentences like "Mr. Khan is inspired by the devil". Nagi says that he had recently contacted the ultra-conservative Salafist Pierre Vogel, who supported his Koran distribution campaign and asked for assistance. An assistant to Vogel demanded 30,000 euros for the Islamist preacher Vogel to appear. Vogel later issued a death threat against Khan to Nagi. These allegations cannot be verified. Anyway, Nagi says he didn't pay. Why is he only now telling you about the alleged death threats? "If something happens, I blame myself." He also says that he does not want Khan to be murdered. Because: "What happens to my lawsuit?"

The two men are probably more alike than they think. They are ideologically blinded, see themselves as victims and fight for their version of freedom and human rights.

Khan fears Muslims in general, Nagi especially, since his testimony about Vogel, the Salafists. Both fear for their lives, Khan is under police protection, Nagi says it could be that extremist Salafists kill him.

But stop? None of them think about that. Zahid Khan plans to publish a new book soon. Title: "Islam does not belong to Germany". Stefan Salim Nagi would like to sue the Frankfurt Higher Regional Court and warn against the book in Arab countries. And the Darmstadt public prosecutor has initiated an investigation against Pierre Vogel.