What is vertical masonry

4. Vertical methods of draining walls by interrupting the capillary transport

If there is no vertical or horizontal waterproofing layer in old buildings or they are defective. The result is wet walls. In order to dry damp walls in the long term, the vertical (vertical) sealing layer must first be installed on the outside of the wall (see Figures 19 and 26). Whereby there are also different experiences. The process cannot be used everywhere without hesitation. It should be noted that with an outer barrier layer, the moisture that has penetrated over many years, including the wall salts, can then only escape inwards and must be removed accordingly. 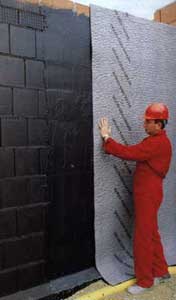 Seals installed inside are cheaper but completely worthless; on the contrary, they lead to the destruction of the building in the long term, as the moisture remains in the masonry and the evaporation surface is shifted upwards.
Before choosing the method, it must be clarified whether it is earth moisture, non-pressing or pressing water.
It must also be checked whether the moisture load is not caused by condensation or hygroscopic salts. The differences in the surface temperature on the basement wall above the floor and approx. 1 m are 3 K and greater and in summer 16-18ºC and a relative humidity of 70%, this means 85 - 90%. It should be noted that there is a correlation between decreasing humidity and increasing salinity. The distribution of salt near the surface naturally affects the moisture balance of the masonry, because the hygroscopic moisture or sorption isotherm changes as does the evaporation behavior. The complexity of moisture and salt transport have not yet been taken into account. This also explains why many dehumidification applications (correct: procedures to interrupt the hitherto unhindered transport of water or electrolytic solutions) did not meet their specified objectives in the past.
For example, with old natural stone walls in castles, old buildings, etc., the following procedures cannot be adopted without hesitation. In many cases, surface warming (change in dew point) and targeted ventilation for the dissipation of the higher air humidity help (see point `` Methods for wall drying '').

*) The prices are for guidance only and may vary depending on the version and location. 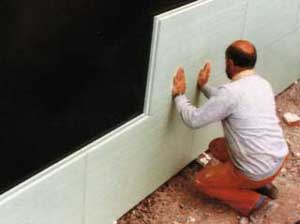 Regardless of the requirements of the EnEV, perimeter insulation should be installed outside when the basement is used as living space (Fig. 27). The interior wall surfaces below ground level have a relatively low temperature, especially in summer, depending on the brickwork. Because the adjacent deeper soil layers have a lower temperature than the outside air. The temperature difference on the inner wall surface from floor level to the middle of the wall can be a few degrees. In summer, when there is a higher relative humidity, this can favor the growth of mold, especially in the lower section of the wall. For example, the air temperature is 22ºC with a relative humidity of 65 - 70%. This results in a relative humidity of 90-100% on the wall with a temperature of 15-16ºC. The diagram in Figure 28 shows the distribution of temperatures and relative humidity in a basement apartment in a villa in Jena in summer. Despite intensive and regular ventilation, there was a high level of mold in the apartment. There are many large deciduous trees around the villa, so that there was also a high level of humidity outside the house.

The external insulation of the basement wall (Fig. 25) does not reduce the humidity in the rooms, but increases the surface temperature inside. The temperature differences between the room air and the surface should decrease. This means that the relative humidity on the lower wall section is slightly lower and less moisture is absorbed by the masonry.
As shown in the example of this basement apartment, the same applies to all basement rooms. This is also the most important reason why the basement masonry is damp in the lower section of the wall, especially in summer. Wet basement masonry is not only caused by rising damp. In Fig. 29 you can see the average moisture load on the interior masonry. The exterior masonry is on the left in the picture. The level of moisture exposure decreases in the direction of the center of the building. The above-described vertical sealing of the basement masonry against the ground makes sense. At the same time, however, the formation of condensation on this wall section must also be avoided. Correct ventilation in the cooler season will gradually reduce the moisture from the masonry. 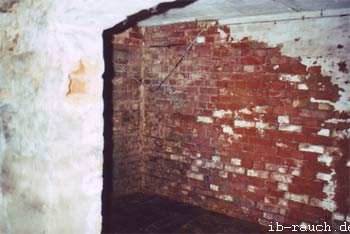 Thepro building system was developed especially for new buildings. It connects the sealing and thermal insulation with the masonry so that there is no backflow. The system connects homogeneously with the concrete. Even if damaged, moisture cannot spread. The seal consists of a multi-layer bituminous sealing membrane with a fabric membrane and thus meets the requirements of DIN 18195.