Copernicus was from which country 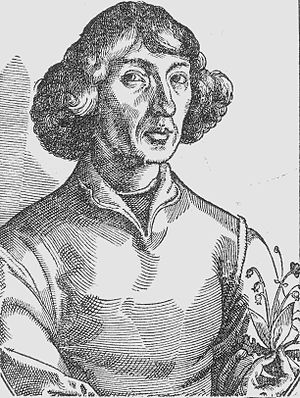 Did Copernicus look like this? The picture did not appear until over thirty years after his death. It is believed that it was made from a picture that Copernicus himself drew of himself.

Nicolaus Copernicus was an astronomer at the beginning of modern times. He came up with a new way to explain the universe. At that time it was believed that the sun, the moon and all planets revolve around the earth. Copernicus said it was the other way around: in the middle is the sun.

The doctrine of Copernicus did not take hold immediately. It wasn't until about 100 years later that other astronomers had enough evidence that Copernicus was right after all. Today, however, we know more precisely that the sun is the center of the solar system, but not the center of space. The universe has no center and is much larger than Copernicus could have known.

Was Copernicus German or Pole? 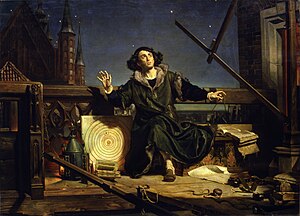 Four hundred years after Copernicus was born, the Pole Jan Matejko painted this picture. He called it "Conversation with God". The cathedral of Frauenburg can be seen behind Copernicus. He has instruments with which he observed the sky and a drawing with his view of the world.

When Copernicus was long dead, Germans and Poles argued about where Copernicus belonged. Copernicus came from a German-speaking family. In addition to German, he also spoke Polish and Latin and often spelled his name differently, depending on where he was living.

For the longest part of his life, Copernicus lived in Thorn and later in Frauenburg. These cities did not belong to Poland at that time, but the Polish king was their patron. Today Copernicus is revered in Poland as the country's great son. A museum has been set up for him in the Domburg in Frauenburg.

What was Copernicus' profession?

Copernicus was born in the city of Thorn, supposedly in this house.

When Nikolaus was a little boy, his father died. So he grew up with his uncle. This uncle was a wealthy bishop and made sure that Nicholas could attend good schools. He studied several subjects at universities in Poland and Italy, as was customary at the time. Most of them were law and medicine, mathematics and maybe astronomy as well.

After that he first worked for his uncle, also as a doctor. When he was almost forty years old, Nikolaus became a canon in the city of Frombork. That was some kind of officer for the church. The Church liked that he was interested in astronomy: the more people know about it, the better calendars you can make. Because it was important for the Church that the beginning of Easter was calculated correctly, which falls on a different day every year.

What did people think about the earth and the sun back then?

From a book from 1660: This is how Ptolemy imagined the universe. The earth is in the middle.

In the Middle Ages, people mainly believed in what had been written down in ancient times. The Greek philosophers Aristotle and Ptolemy said that the earth is in the middle of the universe. The moon, the sun and the five planets that were already known then revolved around the earth. It was believed that the paths of such heavenly bodies around the earth were perfect circles.

The earth was in the middle of everything because at that time four elements were assumed: earth, water, air and fire. The earth was the heaviest and therefore around the center of the universe. The water then floats on earth, in seas, lakes or rivers. Above the water is the air that we breathe. When we turn on a flame, it points upwards to the natural place of the fire.

But the earth stood firmly in place and did not move. This is what is called the geocentric view of the world: “geo” means “earth” and “centric” means “in the middle”. This was the only way to explain that, for example, people on earth do not fall down. The bodies of the people were also heavy and strived for the center in the middle of the earth.

What was the problem with the old world view?

The Greek philosophers could actually explain everything well - except for the movement of the planets. When you stand on earth and look at the sky, the sun and moon move their orbits as normal. The sun rises in the east and sets in the west. But planets like Mars seem to run in one direction and then in another. It moves in such a way that its path looks like a loop.

If you observe where Mars is every night and then draw a line, you can see that the orbit of the planet Mars sometimes looks like a loop.

Ptolemy wrote his great work on the earth around the year 150 AD. He tried to use mathematics to describe what he saw in the sky. In order for it to work somewhat, he came up with some strange things or adopted them from other philosophers.

What did Copernicus notice?

This drawing by Copernicus later appeared in his famous book. The circles are the orbits of the planets. In the middle is “sol”, the Latin word for sun.

Copernicus observed the stars and planets at night and wrote down what he saw. Other astronomers did the same, so that one knew more and more precisely how the planets apparently went around the earth. Copernicus' observations made him a respected astronomer after his death.

He didn't dare to make his idea known to everyone. It turned many things upside down that were considered right in science at the time. He only sent reports to a few good friends and acquaintances. They finally persuaded Copernicus to publish the idea and the observations in a book. This book was published in 1543 just before Copernicus died.

The book was in Latin, as was customary at the time, and it was also very difficult to write. Only good astronomers could understand everything. The title was: "De revolutionibus orbium coelestium", From the revolutions of the heavenly circles. The worldview of Copernicus was finally called "heliocentric" because the sun is in the middle. "Helios" is the Greek word for sun.

Did you believe Copernicus? 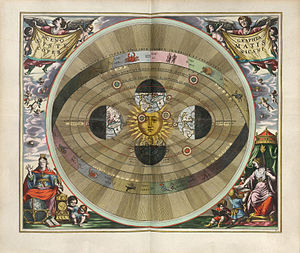 A book from 1661 shows the teaching of Copernicus: The sun is in the middle, around it you can see the earth at four different seasons.

The astronomers were particularly interested in the observations of Copernicus. They also found it good to be able to calculate the planets' movements more easily. But they had no reason to believe in the heliocentric worldview. Because you could only calculate the movements more easily, but not predict them more precisely. The idea of ​​Copernicus explained the universe no better than what had been known for centuries from Aristotle and Ptolemy.

On the contrary: Copernicus explained almost everything else worse. According to Copernicus, the earth rotated not only around the sun, but also once a day around itself. This rotation of the earth ensures day and night. But how did the earth move? And if it spun, why aren't people and everything else on earth hurled into space?

Many people today believe that the Church was against the heliocentric worldview. That is not completely right. There is a passage in the Bible in which a general allegedly stopped the sun so that it would be light longer. At the time of Copernicus this was not taken so seriously, it only became a big argument later.

Who showed that Copernicus was right?

So many years after Copernicus there were two worldviews, of which one did not know which was correct. Tycho Brahe from Denmark and Galileo Galilei in Italy were famous astronomers who favored the heliocentric worldview. But the decisive idea came from Johannes Kepler from Germany, so that it would prevail.

Kepler mainly looked at the movements of Mars and in 1618 had a new idea ready. Since ancient times it has been believed that the planets revolve in circles around the earth. Kepler realized that in reality it didn't have to be circles, but ellipses. An ellipse is a kind of elongated circle, an oval. If you assumed that, you can finally predict the movements of the planets much better.

But why don't things fall from the earth when it rotates? The answer was finally provided by Isaac Newton from England - at that time Copernicus had been dead for almost 150 years. Kepler and others had already believed that there had to be a force between the sun and the planets. This "long-distance effect" would ensure that the planets stay on a circular orbit and that people and things "stick" to earth. A magnet works in a similar way.

Newton's idea was "gravity". Gravity or gravitation is a force between all bodies. The bigger a body, the greater the force. The more distance there is between the bodies, the weaker the force becomes. A person stays on earth because the earth attracts him.

The last evidence was found in the 19th century, 300 years after his death. The earth moves and is therefore always in different places. Seen from the earth, the stars in the sky are always a little different to one another because the perspective changes from the earth.

There is also an article on “Nikolaus Kopernikus” for beginners on MiniKlexikon.de and other search results from Blinde Kuh and Ask Finn.

The Klexikon is like a Wikipedia for children and schoolchildren. The most important things explained simply, with definition, many pictures and maps in over 3000 articles. Basic knowledge suitable for children, everything easy to understand and good for presentations in school.
<?