On the cultural history of the white stork

One can safely assume that the German Association for Bird Protection (DBV, root of the NABU) did not include any bird in its logo from a wide range. With the stork he decided in 1966 for a representative of the bird world, which embodies the unspoken, the hidden, the “deeper” like no other kind. 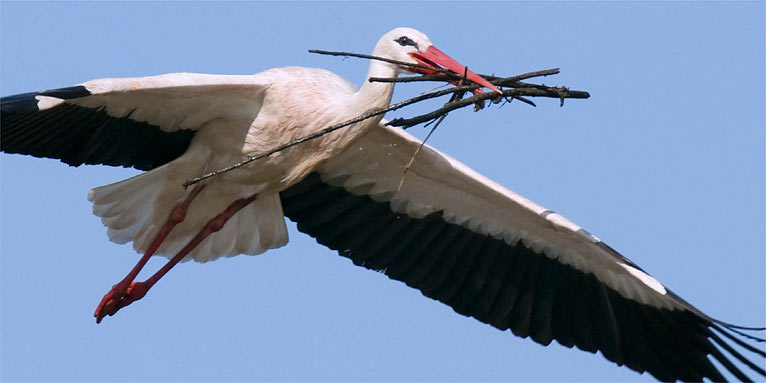 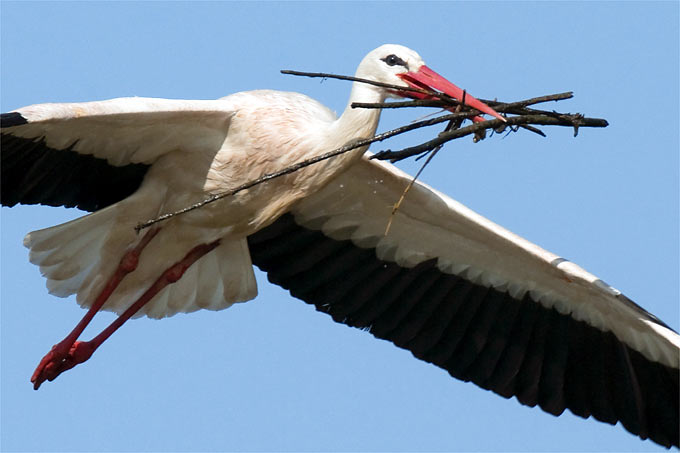 What did the stork stand for and what became of it over the years? Is he always the same across cultures? An analysis of its inclusion in the culture of centuries and - in his case, the retrospective extremely productive - millennia shows: it has been used almost “always” as a surface for human projections, hardly ever with a negative connotation. DUVE and VÖLKER (1999) formulate this very catchy in their witty “Lexicon of Famous Animals”: ​​“Everyone finds what he is looking for in his favorite animal and everyone is just looking for himself ... It should be similar to us ... His life resembles that in every detail in the human world. ”In the following it will be worked out what a good and successful choice DBV / NABU once made!

In the case of the white stork, the signs of spring, happiness and children are superficialbringer thought of the latter, probably always with the knowing smile of the sexual. But its history in culture goes back much further and the child-bringer, today more of the childrendoer, is only the last small part of this development.

We have sufficient reliable knowledge about this from the ancient Egyptian pharaoh empire. The Egyptians believed they had recognized that the young storks looked after their parents when their strength diminished in old age. The pharaoh CHA-BA (around 2670 BC) used this extremely positive image - for which there is no biological evidence - in his name, visualized in hieroglyphs, in which the stork is visually integrated.

The ancient Greeks as a great successor culture took over this attractive myth and continued to shape it. They created the term antipelargesis (anti: back / reply, pelargos: stork), a kind of obligation to return or "stork thanks". They went so far as to enter this stance Lex antipelargesis (Stork Act), which urged the young Athenians to thank and fulfill their duties towards their ancestors, in modern terms a kind of pension insurance.

It is almost amusing today that the term antipelargesis expanded considerably and is still listed in the German dictionary of the Brothers GRIMM (1854). There he also describes sober processes such as the return of money after a loan. This appears in the fable AESOPS (around 600 BC) “The Farmer and the Stork”. The farmer (farmer) had set up nets against cranes as "pests", and a stork had also got caught. In his great need he paralyzed himself, asked for his freedom, appealed to his good heart and the respect with which he supported his parents, to his merits in eradicating harmful animals and how he was not even outwardly similar to the cranes . “Everything is fine,” replied the farmer, “but I will treat you after your bad company!” This fable has remained known today under the “moral of the story”: went along, caught up, hung up!

The Romans, the next great cultural epoch of antiquity, took over the myth and expanded it into theirs Lex ciconaria and ultimately even perverted him. They placed the white stork as a symbol on the side of the pietas, the main virtue of the state of pious reverence and the fulfillment of duties to the parents, the ancients, the gods, the state and - new with the Romans - also the military commanders. So wore the great legion III Italica in Raetia, today's Austria / Hungary, the stork in their emblem. “Thanks to a stork” until death?

The stork seems to honor father and mother

The myth of the stork also had an impact on the emerging Christian church. The early church fathers of the 3rd and 4th centuries AD saw the fourth commandment in him as realized, because the stork seemed to honor father and mother. This stork symbolism of the fourth commandment was found in Central Europe up to the Gothic period, for example in the form of four stone storks on the towers of the Strasbourg cathedral.

And another “virtue” of the stork could be used in a Christian context. The stork eats "lower" animals, especially snakes, which were considered dangerous and were seen in league with the devil after Adam and Eve's wrongdoing. The stork became the adversary of the serpent, the devil, until it was perceived as a symbol for and, when it came to a head, even as Christ himself. There are numerous pictorial evidence of this from the late Middle Ages in the transition to modern times.

A bronze sculpture from around 1900, presented in the Westphalian Stork Museum, illustrates this. The stork is wrestling with an overly long snake that is winding ominously around its neck. However, it will fail. The stork is already standing on an oak tree, symbolizing long or eternal life. The tree is carried by three midwife toads, the symbol of new life emerging, also a symbol of midwives. The knowledge of the stork as the savior of evil has largely disappeared today. But it will certainly have remained compressed in our positive feeling towards the stork. Only if we think the stork is beautiful, if it "struts" and if we just "like" to see it (but not the heron), we carry the cultural history a little further. How could ALFRED BREHM put it: “He seems dignified to us”, as if the sparrow, for example, were not dignified?

The extremely positive, essentially “holy” image of the stork was used by pietistic strivings that established themselves after the Reformation. In the aftermath of the apostle Paul they found it difficult with everything “fleshly”, especially sexuality. It did not take place, at best it was baffled. The stork succeeded brilliantly: He brought the child to the woman "from heaven ...", asexual, pure, one-born. The newborn was thus innocent, free from the apparently sexually passable original sin in the consequence of Adam and Eve's fall, combined with their shamefully repentant perception of their sexuality. An almost unbelievable balancing act was achieved in the stork as a child carrier: pure immaculateness on the one hand, and yet symbolization of the sinful sexual act.

When “The thing with the stork” (book title HAGEN and HAGEN 1993) is mentioned, the sexual attitude is quickly imposed. But let's take a closer look: if a wooden stork is placed on the house of a newlywed couple, it actually comes nine months early! It therefore indicates that from this point on, sexuality may be practiced legally. The couple are no longer suspected of unchaste behavior.

From this point of view, it is far too short-sighted if we “enlightened” dismiss the stork's child-bringingism as mere kitsch. It is integrated into the long, predominantly positive cultural history of the stork, which understandably began at least 5000 years ago. Incidentally, one can only distance oneself from something once we have understood it. If not, we pass it on unnoticed and uncontrolled by simply seeing the white stork as a “special” bird, “beautiful”, or recognizing its gait as “strutting”. Myths are likely to have a much more lasting effect “unconsciously” because they are no longer subjected to testing and, if necessary, discarded.

The black stork as the messenger of the highest god Odin

The black stork, also a gem of nature conservation, is much less popular with the public. Due to his rather secret way of life, but perhaps just because of his dark color, he remained a “black fellow”. In various cultures he was even accused of bringing sick or "gypsy children". But this was by no means always the case. In almost all of the forested Germania (and Scandinavia) - habitats that the white stork could not colonize due to its way of life - the black stork was regarded as the messenger of the highest god Odin. Fetched on behalf of the Holda Ciconia nigra the souls from a pre-existing realm, which, at the moment of the first cry, united with the body to become a whole person.

Much from pre-Christian times - hardly recognized today - has survived into modern times, including the children's origin of water. Over several centuries the Germanic gods and the Christian god met and formed connections. Various Christmas customs are certainly best known here.

This “mixed lot” can be shown very nicely at Dresden Queckenborn, one of many children's fountains that still exist today. First mentioned in a document in 1461, several centuries before the activity of the white stork, the ingestion of its water made "blessed mothers of sterile women." . This was to a certain extent cushioned by adding a stork sculpture to the fountain in 1735. This was then "of course" a white stork that brought all Christian virtues with it. In 1945 the sculpture was destroyed during the war and renewed during the GDR era in 1968, to a certain extent in a new ideological field of tension.

Myths surround many other bird species, but which one wanted to compete with the stork? NABU is rightly proud of its stork and likes to carry it in front of it. Even if all other bird species are “special” and no one should be denied their dignity: a good choice and congratulations to NABU!

Summary of this article

Further considerations by the author

Storks on the move 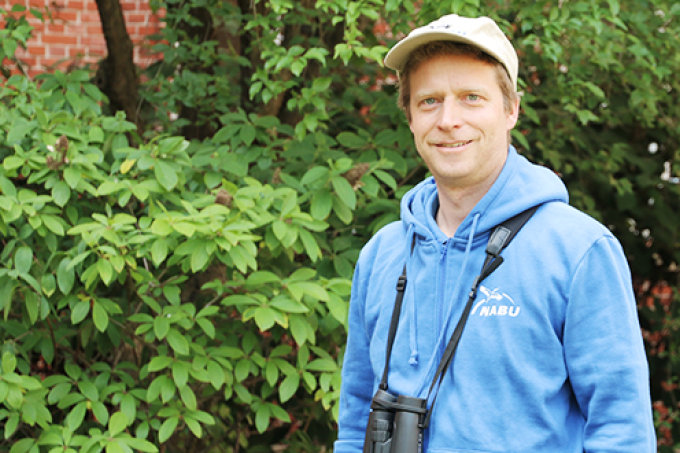 “The populations of almost half of our migratory bird species have been shrinking for years. That is why migratory birds need our special protection. Help us! "

Do you have questions?