What were your first impressions of Tokyo

24 hours in Tokyo - my experiences with the megacity

After my first stop was Manila, I took the not exactly direct route to Tokyo. With a total of two nights on site, the time was tight and due to my late arrival and early departure, I only had a little more than 24 hours in the Japanese city, which, like Japan, extremely impressed me despite the short visit. 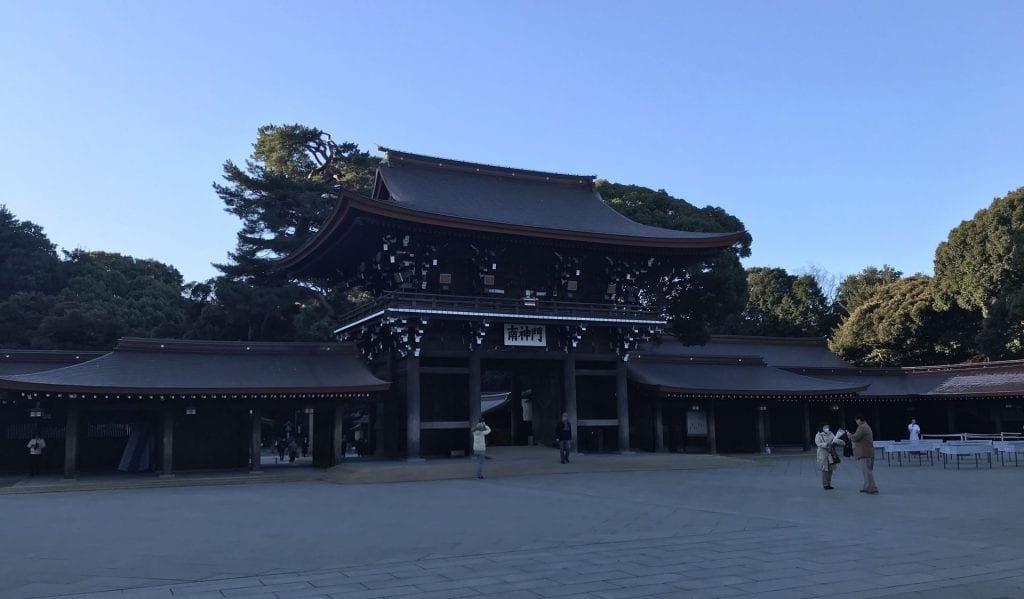 Since I wouldn't even begin to call myself an expert on Tokyo after my short visit, this shouldn't be a real city guide, as we usually publish it here on reisetopia. Nevertheless, I don't want to withhold my impression of this fascinating city and Japanese culture from you and show you why Tokyo, like Japan, should definitely be seen in my opinion!

Organizational brilliance and an elusive size

The first impression I got of Tokyo as a city and Japan as a country and culture was fascinating. Coming from Germany, I think culturally you are used to a certain organization and assume that certain things “just work”. Anyone who has already been to Southeast Asia knows that this is not necessarily one of the virtues in large parts of the world and that things can also work out differently. 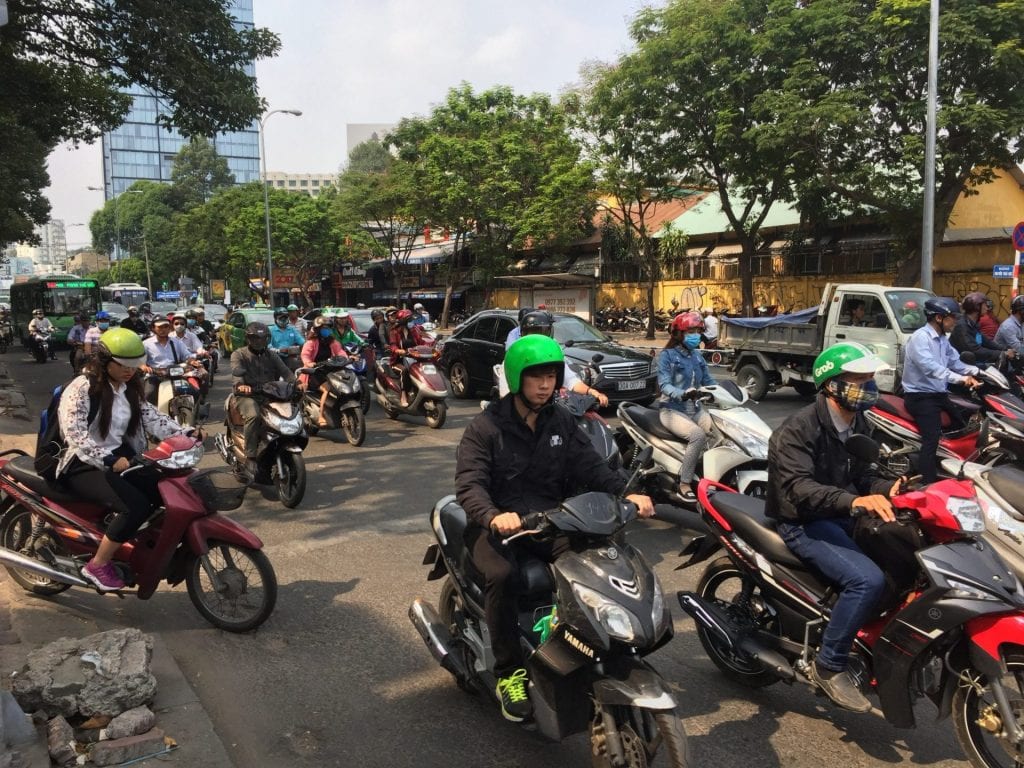 When I arrived in Japan, however, it became clear that we Germans still have a lot to learn, both in terms of organization and friendliness. What I mean by that can be determined from numerous examples. In addition to the fact that it took me exactly 10 minutes from my seat to the arrival hall after landing (including immigration and customs), I found an almost unbelievable phenomenon for hectic Europeans: No matter where many people go to an entrance or A door crowded, orderly queues formed all by themselves and everyone just stood in line. On the escalator people stand to the left and walk to the right without any ifs or buts. At the entrances of the subway there is a straight line to get on, a picture that one does not know from large western cities.

Overall, the traffic situation in Tokyo is extremely good. An extensive subway network, which has English signs and free Wi-Fi at all stations and even on some lines, make transportation easy.

When looking at the city from the Tokyo Skytree, a large observation tower, I also realized why things can only go that way. The sheer size of the city and the huge number of people who are in such a small space is difficult to manage without order.

A seemingly endless sea of ​​houses stretches in all directions from the Skytree, making it difficult to determine the exact city limits.

Amazing calm and peacefulness in the city's parks

What also surprised me about Tokyo was the immediately recognizable otherness of the city compared to other metropolises. While in big cities there is usually a lot of hustle and bustle and a certain background noise never goes silent, in Tokyo I always had the feeling of being able to escape it all in the middle of the city center. The numerous parks and the shrines in them create a peaceful and calm atmosphere, which together with the tranquility that prevails in some areas, almost seems ghostly.

Japan is culturally a very spiritual country, which you can even see in the city. As I wandered through one of the numerous parks in the morning, I discovered a small shrine in which a group of people were just about to welcome the New Year with a spiritual ceremony. A fascinating spectacle that I watched for a few minutes. To suddenly experience complete silence and peacefulness in a huge city like this was completely new to me. 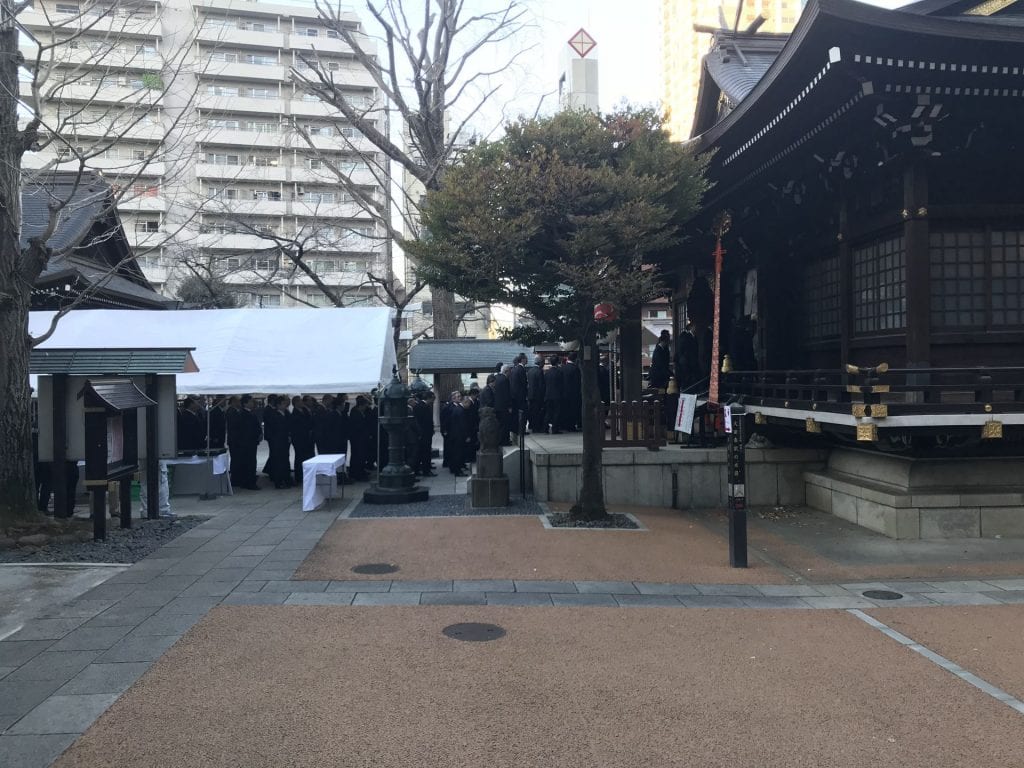 It was similar to me when I walked through Yoyogi Park in the direction of the Meji Shrine, which is definitely worth seeing. Here, along with other tourists, I met mainly people who prayed before working on the shrine and thus welcomed the day. Overall, Tokyo always seemed to me to be calm and peaceful in a certain way, despite its size, which I liked extremely well.

When it comes to food, as a sushi fan I was of course primarily looking for nigiri and maki. In a typical sushi bar, I found exactly what I was looking for: a counter where many Japanese people were sitting and a sushi master was freshly preparing the dishes. In terms of taste, of course, absolutely brilliant, although reading the menu admittedly led to difficulties. 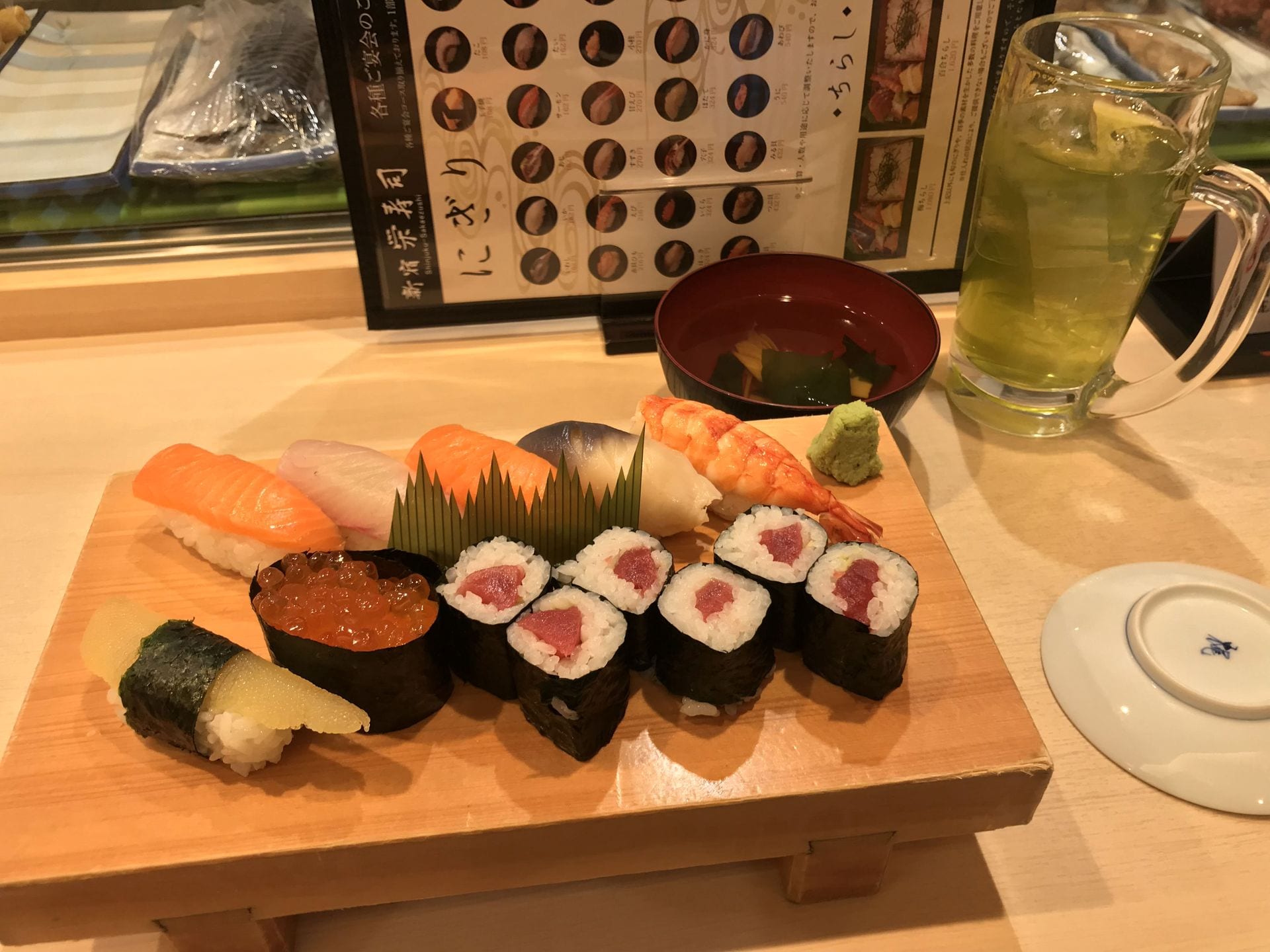 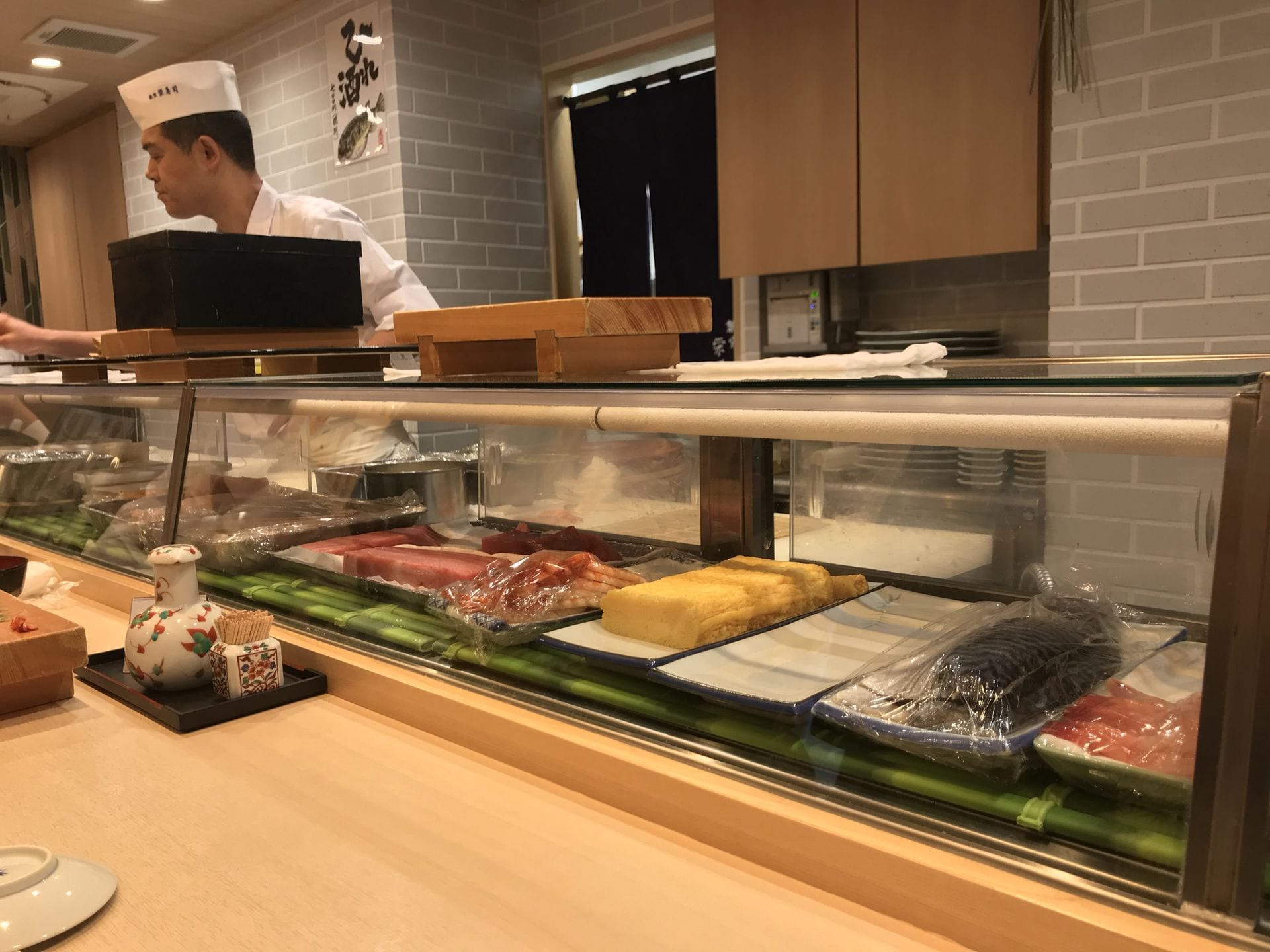 Otherwise, however, Japanese cuisine is not really my cup of tea. A focus on seafood and fish, the existence of which I was previously unaware, as well as a somewhat unusual preparation of meat kept me away from other Japanese restaurants. This impression continued on my way home with Japan Airlines, which you can read in my lounge and flight review.

What should be mentioned again at this point, however, is the way in which I will remember the Japanese and their culture. I have seldom experienced such friendliness in a country that has so little been influenced by Western influences. Although always very distant and cautious, people always interacted in such a positive and almost submissive manner that I was surprised. Of course, this was especially true in service-oriented circumstances, such as restaurants or in hotels, but certainly not exclusively. One experience I will remember is my first interaction with a Japanese after my arrival. I was a bit sleepy and still a little off the track at the airport looking for a cheap way to get to my hotel and had no idea where to go. While in other countries in Asia you are always best served by not talking to anyone and inquiring about the Internet, otherwise you will be ripped off anyway, things looked blatantly different in Tokyo. I asked a tourist center how I would get to my hotel as quickly as possible.

The lady smiled directly at me and was more or less happy to be able to present me with an exact path that should bring me to my destination cheaply. That not only meant that there was a vague tip about where the train was, but it marked my transfer point exactly, showed me on a laminated picture of the ticket machine how I got my ticket and gave me a marked card. She also pointed out the free internet that is available on the Tokyo Monorail, the train that connects Haneda Airport with the city. A completely new experience if you compare it with the bad-tempered and mostly completely incompetent people who have now made sure that I stay away from tourist information centers.

Conclusion on my impression of Tokyo and Japan

In short, I didn't want to leave Japan when I checked out of the hotel in the morning. For a long time, a country has not made me so curious about anything more and left such a positive impression. The fascination is to a certain extent also due to the fact that Japan is one of the countries that is culturally furthest from the West, because the country has only been in contact with the West since the 16th century and its influence has long been known withdrawn, which you can still see today. Acquaintances who have also been to Japan or have dealt with Japanese often share this impression, although there are also other opinions. For example, the Japanese are said to have a certain arrogance and deviousness, which I did not find out, but after my brief visit I do not want to deny either. Regardless of that, I'm already looking forward to my next visit and can hardly wait to discover the country outside of the mega-metropolis of Tokyo. Japan and Tokyo should definitely be on the travel list!