Why does the left support immigration

The party and parliamentary group meet for debate in the Bundestag. The fact that Sahra Wagenknecht listens to the end is considered a success. 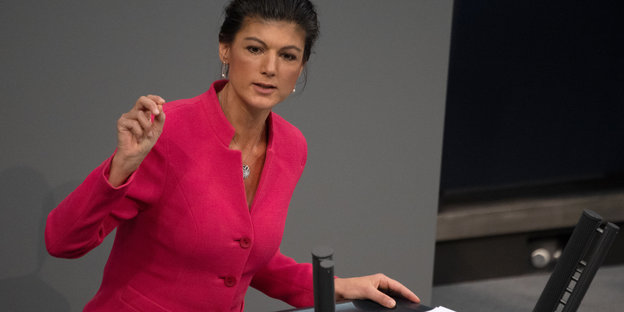 Suddenly capable of compromising within the party? Sahra Wagenknecht in the Bundestag Photo: dpa

BERLINtaz | For the Greens, things are going uphill at the moment, for the Left Party it's downhill. The party is currently in polls at eight percent. How different the mood is was also shown on Friday evening in Berlin. Members of the Greens met over wraps and cakes in the Marie-Elisabeth-Lüders-Haus of the Bundestag and watched the documentary “The cleaners” together. One floor above the left-wing delegates met with the party executive. At first there was nothing to eat.

They also met for a crisis talk, more harmlessly formulated for discussion. This had already been decided by the party congress in June. The party is currently fighting as bitterly about nothing else as about migration policy. The issue is also controversial because the parliamentary group leader Sahra Wagenknecht repeatedly emphasizes that she considers the position of "open borders for everyone", as it is laid down in the party program, to be completely utopian. Wagenknecht is committed to limiting migration. This substantive debate has been asked more and more openly in the left in recent months as a question of power and has recently culminated in the blatant demand: Wagenknecht must go.

Wagenknecht sat in the Bundestag on Friday and listened to the end. That alone can currently be considered a success by the left.

The expectations of the debate were diverse. "Doesn't do anything anyway," said some members of the parliamentary group in particular, in which the mood could be better. “She does what she wants anyway.” Perhaps: Wagenknecht, who appeared in a green short jacket and immediately saw herself surrounded by media representatives, makes no secret of the fact that she will not be committed to the majority opinion decreed by party convention decision in the future either. What will the result of the event be? "Of course tomorrow I won't say that anyone who wants to come can come," she said, chin raised.

Others, especially members of the party executive, were looking forward to the debate: It was good that we could finally meet and talk. In fact, it was the first time that the 44-member party executive and the 69-member parliamentary group met in this form.

And that's how you talked. After the initial statements of the four chairmen of five minutes each, each had a turn, for five hours. You talked and talked, and how many participants reported during the break - there were even cakes and sandwiches - at a pleasantly factual level. Even Wagenknecht feasted with appetite: "I am pleasantly surprised at the factual nature of the debate," she said.

A joint paper by the parliamentary group and party chairmen, which had been negotiated only a few hours earlier and which, in addition to numerous similarities, also dealt with the central dissent, namely the issue of labor migration, made it possible to pacify the heated mood. Many, including Wagenknecht himself, welcomed the paper as a common basis for discussion.

The party leadership, however, interprets it somewhat more narrowly, namely as a self-commitment and language regulation that Wagenknecht will have to adhere to in the future. Whether it does that is the exciting question.

Of course there was also criticism: Wagenknecht was asked how the leadership role in the party got along with its prominent role in the collection movement Stand Up. A comrade accused the entire quartet of party and parliamentary leaders, Wagenknecht, Dietmar Bartsch, Katja Kipping and Bernd Riexinger, for complete failure of leadership. Others said that one should generally think about a time limit for mandates and a rotation principle.

When they parted after five hours, the faces were mostly satisfied: “Very factual debate,” said Wagenknecht and disappeared in the elevator. “Controversial, factual, constructive,” is Katja Kipping's conclusion.

On February 16, a good month after the parliamentary group's planned retreat in January, the left want to meet for a symposium to consider how labor migration could actually be regulated. And if. Then above all they want to listen and let experts speak. And at least Janine Wissler, who as leader of the Left Party in Hesse has just led her party back into the state parliament, is optimistic that Sahra Wagenknecht will come. As parliamentary group leader in the Bundestag.